A bot made to challenge traffic tickets has been used more than 9,000 times by New Yorkers, according to DoNotPay maker Joshua Browder.

The bot was made available to New Yorkers in March. In recent years and decades, residents of The Big Apple have seen a persistent increase in traffic fines. A record $1.9 billion in traffic fines was issued by the City of New York in 2015.

Since the first version of the bot was released in London last fall, 160,000 of 250,000 tickets have been successfully challenged with DoNotPay, Browder said.

“I think the people getting parking tickets are the most vulnerable in society,” said Browder. “These people aren’t looking to break the law. I think they’re being exploited as a revenue source by the local government.”

Browder, who’s 19, hopes to extend DoNotPay to Seattle this fall.

To challenge a ticket, users log on to donotpay.co.uk and chat to a bot that asks them questions like whether signs were visible at the time a fine was issued or the size of a parking space. 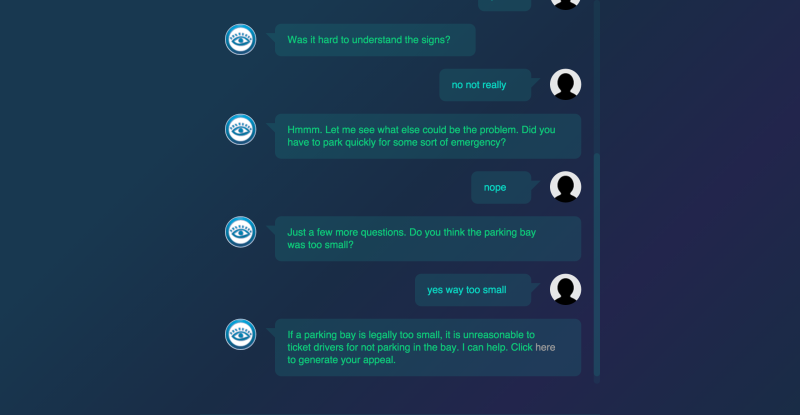 Since the creation of DoNotPay, Browder has begun work on a bot to help people with HIV understand their legal rights and one to collect compensation for people whose flights were delayed beyond four hours.

He’s also creating a bot that helps refugees apply for asylum, as part of the Highland Capital summer startup accelerator program. It will utilize IBM Watson to translate from Arabic to English.

“I feel like there’s a gold mine of opportunities because so many services and information could be automated using AI, and bots are a perfect way to do that, and it’s disappointing at the moment that it’s mainly used for commerce transactions by ordering flowers and pizzas,” he said.