Last month, Ericsson’s ConsumerLab released a mammoth report that revealed strong consumer readiness for 5G network connectivity in their 5G Consumer Potential report. The study, which spanned 22 countries and interviewed over 35,000 participants (representative of the opinions of 1 billion smartphone users globally), was designed to dispel the following four key myths around 5G:

It is important to set the record straight based on facts rather than speculation, because the lack of clarity on the true state of the market has created a polarized field of opinions among industry analysts, even spilling over to the telecoms themselves, on whether the opportunity for 5G is more a game-changer for businesses than it represents for consumers. Indeed, the study reveals that consumers are very much eager to get their hands on the next-generation of mobility.

“Overall, two-thirds of Ericsson’s respondents said that they’re willing to pay for the additional value they’ll get from these 5G services, which are widely expected to go mainstream within two to three years. Early adopters have indicated a willingness to pay as much as 32% more for 5G service than 4G service, but on average, smartphone users say they would pay a 20% premium, assuming new functionality is included in the 5G plan.” the report wrote.

5G’s initial paced roll-out will mean that you will be able to enjoy broadband speeds on your mobile, so it makes sense that video consumption is anticipated to spike to at least 3 additional hours per week, streaming not only video in higher resolutions but also VR and AR experiences that are expected to account for at least one hour. In fact, the study forecasts that by 2025, one in five smartphone users will consume more than 200GBs per month on their 5G device, and the lion’s share of that will probably be from immersive formats.

“They gave us an estimate, but consumers always underestimate what they use,” Jasmeet Sethi, the head of Ericsson’s ConsumerLab, told CNET. “If you use an augmented reality app for just 10 minutes a day, that alone would be generating about 50GBs a month.” I agree, as I can only see an order of magnitude uptick in usage once the avatar layer emerges as what many top brass in the industry believe will quite likely oust the app store model and become the intuitive interface by which we access most of our digital services and experiences. 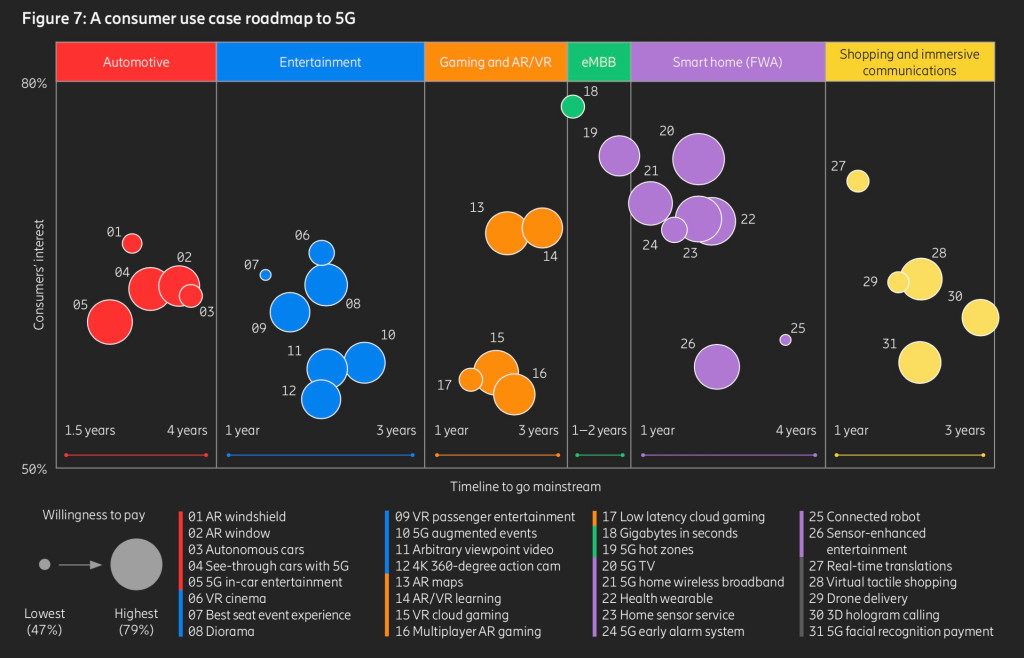 “Computer games, AR, and VR are more demanding in terms of bandwidth and latency, compared to the streaming services that we know today.” said Krasimir Nikolov, CEO and cofounder at QuarkVR, an ultra-fast software solution that provides low-latency compression and wireless transmission of VR content. “The current mobile networks cannot meet the streaming requirements for such an immersive, and uninterrupted experience. 5G, in contrast, has the capability to stream even very demanding and competitive traditional triple-A games, or AR/VR experiences in real time.”

An order(s) of magnitude shift

5G is what allows us to envision a frictionless future in which terms like “download” and “install” go increasingly obsolete, and where all digital experiences become readily available and immediate as instantaneous immersive feeds. As a matter of fact, VR and AR has always anticipated, and even demanded, the rise of short millimeter wave tech as a prerequisite companion in order for immersive experiences to realize to their fullest expression and potential.

“The lack of a suitable supporting network is one of the factors that has contributed to a slower than expected uptake in mainstream adoption of VR.” Sol Rogers, CEO and founder of REWIND, wrote on Forbes last January. “5G will usher in the next era of immersive and cloud-connected experiences. Faster, more uniform data rates, lower latency and lower cost per bit will ensure this.”

The actual upgrade in network connectivity will be, as ABI Research estimates, a “10-times increase in throughput, 10 times decrease in latency, and 100 times increase in traffic capacity” over 4G capabilities. That is, our mobility will go Super Saiyan, which is exactly the sort of piping that high fidelity immersive formats have always required.

Here are some early use cases that ABI Research think are the low hanging fruit to watch closely for as the 5G timeline unfolds:

Bringing things to the edge

Edge computing, which is kind of like the third leg of next generation connectivity, also plays a major role as an energy and cost saver that allows consumers and organizations to optimize on device performance, as well as cut down on pricing schemes, by getting rid of the middleware hardware costs that companies otherwise incur and pass over to the consumer for all sorts of subscription models. This is a bonafide game-changer for the spatial computing industry.

“High-end AR and VR still have quite significant upfront cost, including hardware and the content itself. 5G and the Edge cloud introduce an alternative similar to the business model of AWS or Azure — you pay for a resource only while in use, and can subscribe or unsubscribe in any given moment.” Nikolov told me. “We can imagine a business model where consumers and companies receive the newest headset every year, similar to the current iPhone Upgrade Program.”

This is where QuarkVR comes in. Their technology enables any VR content to run on the Edge Cloud, and they can stream it in real-time over the coming 5G networks to a number of headsets, starting with the Vive Focus, and Vive Focus Plus by HTC. They have already accomplished a proof of concept of this approach for SteamVR content at the hubraum 5G-enabled workspace in Berlin in collaboration with Deutsche Telekom, HTC, and Innoactive. 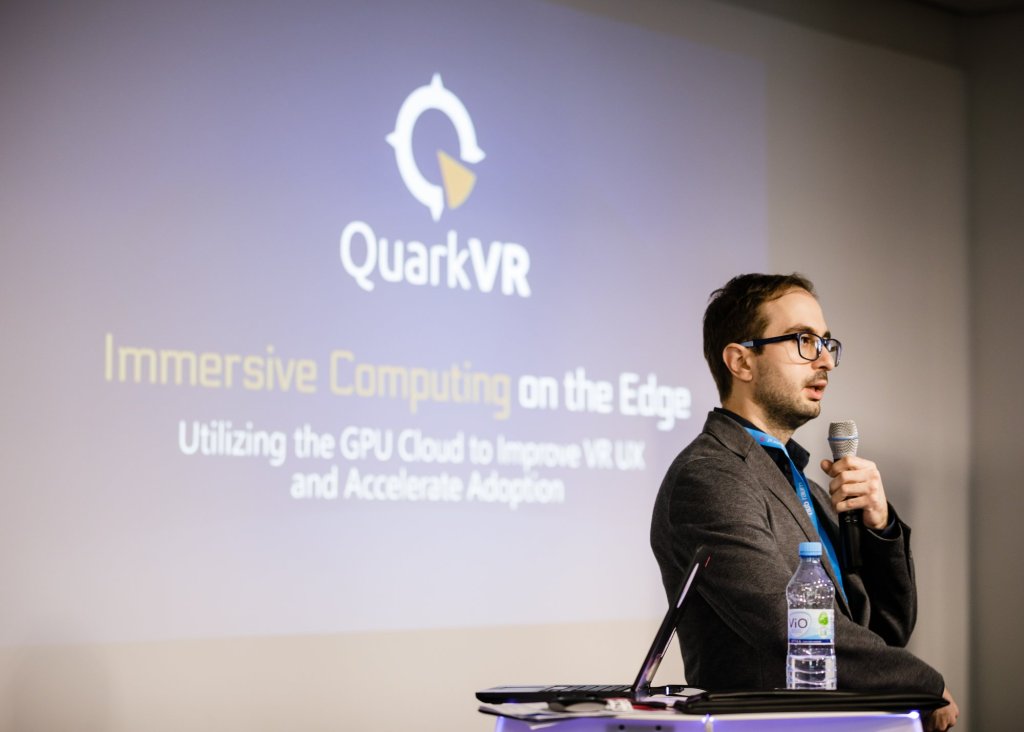 Tech incubators like Deutsche Telekom’s hubraum have been instrumental in rallying the creator community by serving as the testing grounds for experimental applications in how immersive content will be implemented, facilitated, and ultimately consumed in a 5G world. Any big and active players in this space, and most importantly the telecoms themselves, need to scramble at a very fast pace in order to stay ahead of the major tidal rise in connectivity speed, latency, and capacity that will invariably trigger many unknown, seemingly random, and as of yet mysterious changes to the fundamental landscape.

“5G will have both evolutionary and revolutionary impact. Yes, faster internet on your devices will enable you to download that Netflix movie faster.” said Ben Nunez, CEO at Evercoast, an integrated software and cloud rendering platform for real-time and captured holographic content that can exploit 5G to turn the real world into real-time holograms. “But that’s just a basic evolution of increased bandwidth providing incremental value to consumers and businesses. When the iPhone was launched a dozen years ago, it was a neat new device that had a touch screen and some other cool features.”

Nunez continues: “In 2007, it was difficult for a lot of people to see what a revolutionary device the iPhone would become, and it wasn’t until entrepreneurs, consumers, and enterprises started building and creating on this new platform that game-changing and highly disruptive services and business models in things like ride sharing, collaboration, photo sharing, and your health would emerge. The same is the case with 5G. It is a truly foundational technology that will unleash a wave of revolutionary applications in every vertical.”

One of the central spindles from which, in my opinion, some of the most exciting new 5G applications are emerging, is in the acceleration of our volumetric capture capabilities. Evercoast’s platform, for example, is enabling the scalable capture and transmission of real 3D content in real-time for everything from telepresence to the 3D factory line, from security and monitoring theft in a retail store, to training millions of employees, doctors, and students using fully immersive 3D content.

“Our world is becoming more and more 3D every day. From our phones to cars to robots to drones to satellites achieving .5 meter accuracy in 3D reconstruction from space, the broad market market for 3D vision is growing fast. Our human eyes are the most incredible 3D lenses on Earth and yet we’ve been stuck with 2D digital content and communications for decades.” Nunez told me. “5G will be a critical layer that will enable the transmission of large 3D data, low-latency interactions with 3D content, and real-time rendering off edge compute environments. What has been a 2D world over 4G and previous G’s is about to become a real-time, 3D holographic world over 5G.”

Thanks particularly to the mission-critical latency that 5G offers above and beyond 4G’s scope of influence, many otherwise extraordinary applications are now made possible for exceedingly practical use cases — like telesurgery, remote assistance to pilots, and giving superpowers to first-responders, that only a few years ago would have sounded like a pipe dream.