Dropbox first announced Project Harmony in April, describing it as a layer on top of Microsoft Office that enables people to collaborate in real time when working with Office files in their Dropbox folders. That’s exactly what the company is delivering today, for Word, Excel, and PowerPoint.

More specifically, the feature launching today lets you see who else is viewing or editing a given file, and even notifies you when someone has just joined. It also lets you check whether there’s a more recent version of the file in question (and gives you the option to update it), plus it allows you to copy a link to the file you’re currently working on or share the whole Dropbox folder it’s currently in.

As you can see above, all of this is available right from the badge that sits next to your Office document: beside, below, above, on top, or anywhere else you place it. It appears when you open Word, Excel, or PowerPoint, stays in place when switching between these applications, and disappears only when you close all your Office applications or Dropbox.

In fact, if you close Dropbox while you’re using Microsoft Office, you can just relaunch it and the Dropbox badge will reappear. You don’t need to restart all of your Office applications: As long as Dropbox detects Word, Excel, or PowerPoint is running, it knows the badge needs to be visible.

The really impressive part here is that the Dropbox badge works across not just Office on different desktop operating systems, but across different versions of both. More specifically, Dropbox tells VentureBeat that Office 2007, Office 2010, and Office 2013 are supported on Windows 7 and Windows 8.x, while Office 2011 is supported on OS X 10.8, OS X 10.9, and OS X 10.10. 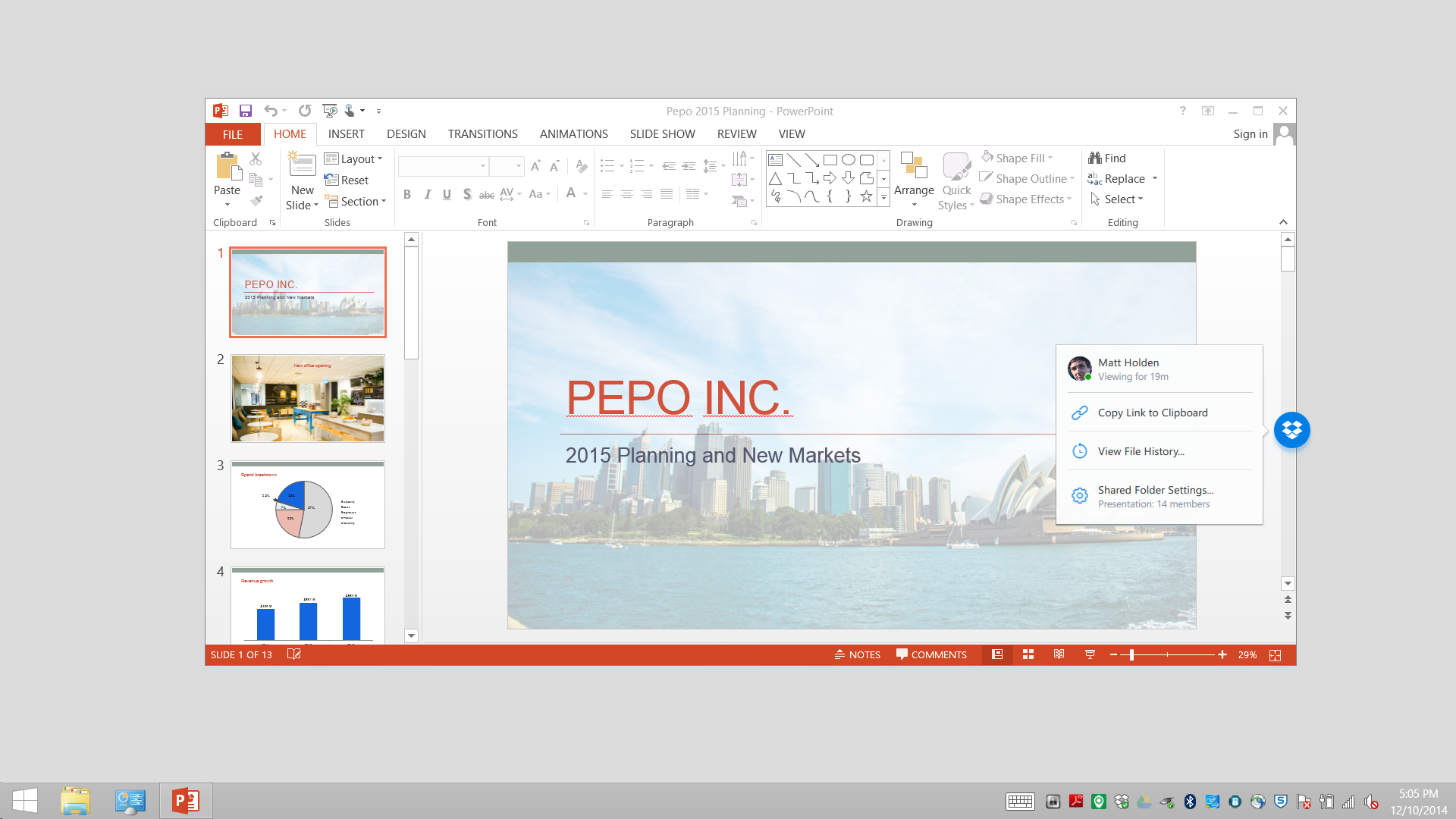 As Dropbox sees it, the badge means you don’t have to send endless email attachments back and forth for every new change a team member makes, worry about who else is editing a file while you’re working on it, or upload a document into a different format just so you can work with others. The Dropbox badge brings all the important information you need to stay in sync with your team right to your Office desktop applications.

Dropbox product manager Matt Holden told VentureBeat that when his team was building the feature, the goal was to make the collaboration on Dropbox “extremely seamless and extremely lightweight.” Based on the demo we saw, the former seemed true, but the latter had a very big caveat worth closer inspection.

Unlike Office Online and Google Docs, the Dropbox badge doesn’t support real-time editing. That means if you edit a document while someone else is working on it, you’ll still be able to save it locally, but you’ll have to manually figure how you want to merge in your changes. 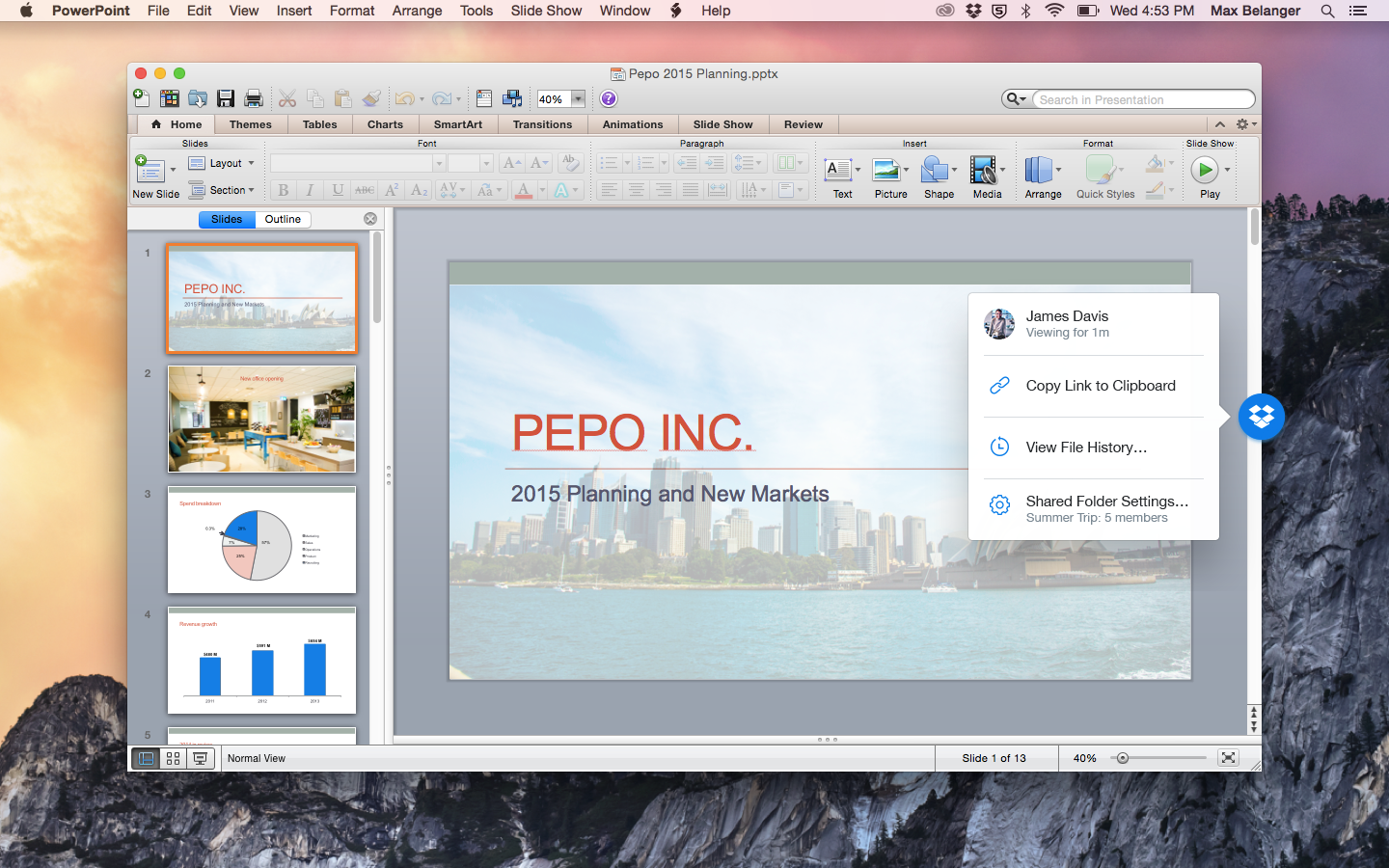 Holden explained that today’s version focuses on sequential workflows, which he argued many of the company’s business customers still predominantly employ. The claim is that multiple people work on the same documents, but they don’t do so at the same time.

While that may or may not be true, depending on who you ask, the Dropbox badge still has one major advantage: It works with the desktop version of Microsoft Office. There really is no reason for Dropbox to compete with Office Online or Google Docs: all the file sharing is already built in, and even if enterprises use these cloud offerings, most still very much depend on Microsoft Office.

In fact, Dropbox says its business customers (over 100,000 organizations) rely on Microsoft Office as the primary way to perform their core day-to-day work. There are over 35 billion Office documents stored in Dropbox, so the potential for the Dropbox badge is huge.

Any Dropbox for Business customer in the early access program can ask their admin to turn on this feature for their team. Everyone else will be getting the Dropbox badge “early next year,” Holden told us.

In short, Dropbox is cutting down on a lot of redundancy that business customers encounter when working in teams. The goal, Holden tells us, is to “make Dropbox the best place to get work done.”

That may not be a goal that the company can achieve, but it’s certainly off to a solid start. As long as Microsoft doesn’t offer something better for its own productivity suite anytime soon, the Dropbox badge has the potential to become a big hit.