Dropbox wants to take over the enterprise, but one thing stands in its way: Dropbox itself.

Since launching in 2008, Dropbox has established itself as the standard for consumer cloud storage. But the consumer cloud is a fickle moneymaker: Consumers are sensitive to price (i.e., they typically don’t like to pay), and continuing to focus just on them puts a major damper on Dropbox’s long-term earning potential.

Recognizing this reality, Dropbox has in recent months shifted its focus to the enterprise, where both IT admins and employees are eager for a comprehensive file-sharing solution that’s also easy to use.

Dropbox gets serious about the enterprise

Here are a few examples of what the new enterprise-focused Dropbox has done just this year:

Generally, all of Dropbox’s moves point to one thing: Dropbox wants to convince companies that it has the DNA to make the transition to the enterprise.

As with most things, that’s easier said than done.

In shifting its focus to enterprise customers, Dropbox has also forced itself to deal with a wide variety of issues that it never had to consider in the consumer space — in particular, questions over security, file control access, and adherence to a variety of data storage standards.

Jason Pressman, a general partner at the early-stage investment firm Shasta Ventures, says that one of the biggest concerns IT admins have with consumer-cum-enterprise cloud services is that they aren’t built with the needs of businesses in mind.

This is especially true in matters of compliance. Consider companies in the financial services and health care industries, who are under heavy pressure from regulators to keep track of who has access to certain kinds of sensitive data and when they access it.

As of August, Dropbox is not yet certified as compliant with data security rules like the Health Insurance Portability and Accountability Act (HIPAA), which describes best practices for storing, securing, and transferring healthcare data. This makes it an automatic no-go for many companies. (Box, on the other hand, recently announced that it was compliant with HIPPA.)

“For a lot of industries, there are very strict requirements for what can be shared outside the organization,” Pressman said. “If you’re in those industries — all board communications, for example — need to be tracked and audited.”

Dropbox faces other, more basic issues as well, some of which are fundamental to the way Dropbox itself works. For one, the service is almost inextricably tied to the cloud, and in turn, Amazon’s Simple Storage Service servers. While that data’s encrypted, some companies might still be worried about who can decrypt those files and access user information. Dropbox, in that sense, is inherently insecure.

Everyone wants to be the Dropbox for enterprise — including Dropbox

Pressman says that one firm solving the cloud security problem is Shasta Ventures portfolio company WatchDox, an enterprise-friendly cloud storage service that takes the Dropbox-inspired “any file, anywhere” concept and pads it with layers of security and file protections.

This leads us to another one of Dropbox’s larger concerns — competition. WatchDox is one of a growing number of cloud services that bills itself as “Dropbox for the enterprise,” or a slightly more damning “Secure Dropbox.” Even if Dropbox solves some of its security and compliance issues, it’s still going to have to deal with a variety of other companies that have capitalized off its late entry to the enterprise space.

Complicating the competition problem is Dropbox’s existing branding as a consumer-focused service.

Brian Jacobs, a general partner at enterprise-focused VC firm Emergence Capital Partners (ECP), says Dropbox’s problem is more fundamental: Dropbox is still a consumer-focused company, and making the shift to the enterprise won’t be easy, particularly from a brand perspective.

“My view is that it’s a challenge to be both for consumers and businesses and very few companies have been able to balance it well. If Dropbox puts more resources into businesses, by definition, it’s taking focus away from the consumer market, where it’s strong,” Jacobs said. (ECP is an investor in Box, which has also heavily transitioned from the consumer to enterprise world.)

But while Jacobs sees Dropbox’s existing consumer brand as an obstacle to its enterprise ambitions, Dropbox business development vice president Sujay Jaswa says it’s that consumer friendliness that gives Dropbox its advantage in the enterprise.

“When people ask employees which file sharing solution they want, Dropbox is by far the first choice. A year ago, we didn’t have the product that would allow IT managers to act on that reality. Now we do,” Jaswa said.

Dropbox: The stickiest cloud service of them all

To illustrate his point, Jaswa points to a recent survey from software development company Spiceworks (PDF) which found that Dropbox was the preferred cloud-based file-sharing vendor among both companies and employees. Out of 162 IT admins polled, 40 percent said that they planned to use Dropbox as their official company cloud-based storage solution. (The next-highest choice was Google Apps, which 24 percent of those polled chose.) 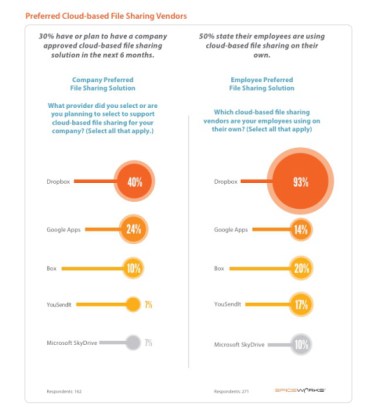 What’s more notable is that in companies whose employes are using unsanctioned file-sharing services, respondents said that 93 percent of their employees were using Dropbox.

This number is unsurprising. For a lot of companies, Dropbox’s infiltration has been gradual and largely accidental: Employees love the service in their personal lives, so they start using it for work matters as well. Suddenly, Dropbox use is everywhere, and IT departments are faced with two options: Either outright block Dropbox, or turn a blind eye to both it and some of the security concerns inherent in the way it works. Neither is a particularly desirable solution.

This is why Dropbox’s smooth transition to the enterprise is so important: It gives both IT departments and the people they manage exactly what they want.

“A year ago, it would have been easy to talk about the challenges because we didn’t focus on the market. Now, we find that customers are really excited to talk to us,” Jaswa said.

The balance for Dropbox here is pretty simple: In order to satiate the IT folk, the company has to make its platform as secure and admin-friendly as possible — all the while continuing to make the experience of using it simple and accessible for the end-user. It’s a tough balance, but Dropbox thinks it has what it takes to make it happen.

“All of our insights come from talking to customers. They come to us and say, ‘We’d love to give employees Dropbox, so here’s what we need to make that happen,'” Jaswa said.

While Jaswa declined to say what Dropbox had planned next (“We don’t want to tip our hands”), he did say that the company has some pretty big plans to announce during the next few months.

“Our philosophy is oriented around giving IT departments the tools they need to justify deploying Dropbox,” Jaswa said. “The way we look at it is, let’s build an end-user product, and the developers and customers will follow.”