Drupal is an open-source framework that powers the back-end infrastructure for about one in every 40 websites. Today its founder, Dries Buytaert, and his lab head, Preston So, are unveiling Acquia Labs to focus on research and development around the future of user engagement on the web. And from what they’ve seen, the next web may be a “browserless experience.”

In an interview with VentureBeat, Buytaert and So said their company wants the web to become integrated with the physical and digital worlds.

“We are moving beyond the page,” Buytaert said. “And for Drupal, we have had to think about reinventing ourselves.”

Acquia has provided commercial support for Drupal website users in the same way that Red Hat Software supports Linux users. Their influence has spread far and wide since Drupal was created 16 years ago, and now they want to attract innovators to build the foundation behind the next-generation web, which in their minds includes conversational computing, location-based computing, contextual experiences, virtual reality, and augmented reality.

That may sound very ambitious. But Drupal’s community has more than 35,000 active development contributors. That’s a lot of people who could potentially help with the research.

“We keep a low profile, but Acquia has become one of the fastest-growing private technology companies in the U.S.,” Buytaert said. “We are at an interesting point in the history of the web. A number of key technologies are coming together.”

In eight years, Boston-based Acquia has grown to more than 750 employees. Now So and Buytaert said they’re ready to take the next step, as the world is moving beyond the web page. They think it’s time to build a new platform for digital experiences, fueled by technologies such as machine learning, the Internet of Things, sensors, conversational bots, and voice assistants.

As an example, Buytaert said you might go into the grocery store and pull up a recipe for cooking salmon. The beacons in the store could detect your intent and show you where the ingredients that you need are located. If your phone knows that you have a peanut allergy, it won’t recommend any recipes with peanuts. And once you get home, your Amazon Echo device could read you instructions for how to proceed with cooking the dish, Buytaert said.

“This is why we created Acquia Labs,” So said. “The website is something that is less and less relevant. We want to move from consumption of content to interaction with content.”

So said that Acquia Labs is a tight-knit team of innovators, coding polyglots, and experimentalists that is focused on solving the internet’s biggest and most exciting user-engagement challenges for Acquia customers.

“We are looking at what is beyond the horizon,” So said.

During the past two decades, the web has evolved to become an omnipresent, crucial part of everyday life. Governments use digital technology to create smarter cities that better serve citizens in their moments of need. Brands leverage A.I.-powered bots to answer questions quickly and boost customer satisfaction, and product manufacturers embed technology into appliances like washing machines to automate service alerts or to auto-deliver detergent before it runs out. Acquia Labs will explore all types of channels, operating as an R&D center to create new tools and solutions for better, more interactive web and digital platforms.

“We’re headed for the next wave of the web, which will radically reinvent how we define the entire concept of ‘online.’ Will websites become obsolete? Will we only converse with computers? How will we get our information on so many new devices? While some shy away from these challenges, we think it’s the most exciting time to be a web developer,” Buytaert said. “Acquia Labs’ goal is to serve as an R&D lab looking to redefine user experiences and use cases for the web, far beyond the browser.” 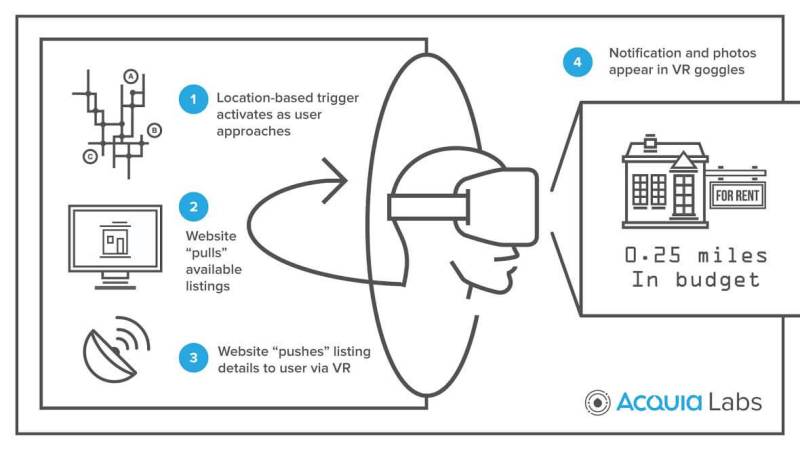 Above: Acquia Labs is looking into making the web seamless with the digital and physical worlds.

To start, the group will focus on three initial areas of innovation that tackle the shifting ways consumers interact digitally with companies and each other. These include conversational interfaces, from Amazon Echo to Apple’s Siri. These conversational interfaces are quickly becoming a new standard in how we get information online. As its first project, Acquia Labs is building Drupal-powered, text-to-voice accessibility technology with Amazon Echo.

With a voice-enabled connector, users will be able to speak with Alexa to interact with brands and content in new ways. Moving forward, the team will work to make this integration a reality for all sites on Drupal.

Acquia Labs is also working on AR and VR. Beyond mobile phones, new form factors such as Oculus Rift are creating a digital layer superimposed on real life. Regardless of the device, getting information onto a VR or AR display is a content-management challenge that Drupal can directly address.

“You may walk around a store with a HoloLens on your head, and you shoud be able to pick up information about an item that you see in the store,” So said. “If you have this contextualized experience, that really changes things. Maybe you hold your phone up to a work of art, and you can learn things about it, as if you were on a guided audio tour.”

For example, the company said, imagine if a surgeon could get guidance and vital stats from Drupal-connected machines through a VR device — while a surgery is in progress. The Acquia Labs team will tackle these content-management challenges, integrating new types of digital experiences into everyday life.

Lastly, the company will look into contextual experiences. Computers are getting smarter at learning what we want even before we know ourselves, the company said. Technologies like Google Now and the new Apple iOS 10 lockscreen push personalized, contextually relevant information to users. Acquia Labs will develop technologies that will allow Acquia customers to build custom user experiences, informed by machine learning, that are relevant and smart.

Dries and Preston will also be able to speak to larger trends in the tech industry and how they see it changing over the next few years. More specifically, they are experts on the changing ways that companies can reach consumers through digital, and on emerging digital trends like “browserless” digital experiences.