Today, eBay is launching a live auction page for Sothebys on its site. The collaboration is the next stage of eBay’s live auction technology.

The auctions themselves happen in the “real” world, in a Sotheby’s location, but with real-time integration with the eBay-Sotheby’s site.

EBay and Sotheby’s first announced their partnership last summer. The collaboration is designed to give Sotheby’s more access to a younger, digitally savvy clientele, while eBay gets an opportunity to expand its high end inventory. Where Sotheby’s and other auction houses have rare, highly valuable inventory, eBay has a decade’s worth of auction technology, making its platform an easy bridge out of the stodgy (and some would argue arcane) world of live auctions.

“We’re seeing appetite for high purchase points across the site,” says Megan Ford, director of eBay’s live auctions. “We went into the bullion category at this high price point and we went into the vehicles category, and every time we move up market our buyers come with us,” she says.

Sotheby’s and eBay’s love child is a sleekly designed interface that features upcoming auctions alongside artist interviews, articles, and other content created by Sotheby’s editorial team.

It displays auction previews on a page that mimics the look and feel of a gallery space, with artworks set against a minimalist white backdrop alongside artwork title, artist name, and materials. High resolution pictures allow bidders to zoom in for brush-stroke detail. A picture of the item hung on a wall let’ them imagine how it would look in their home.

The idea is to recreate the experience of a live auction in the digital realm.

Bidders will be able to view a running feed of bids as they come in and place their own bids. They’ll also be able to flip through the auction catalog within the live auction screen.

To bring together the offline auction with its online counterpart, each online bidder is paired with a representative on the auction floor to place bids on the online client’s behalf. 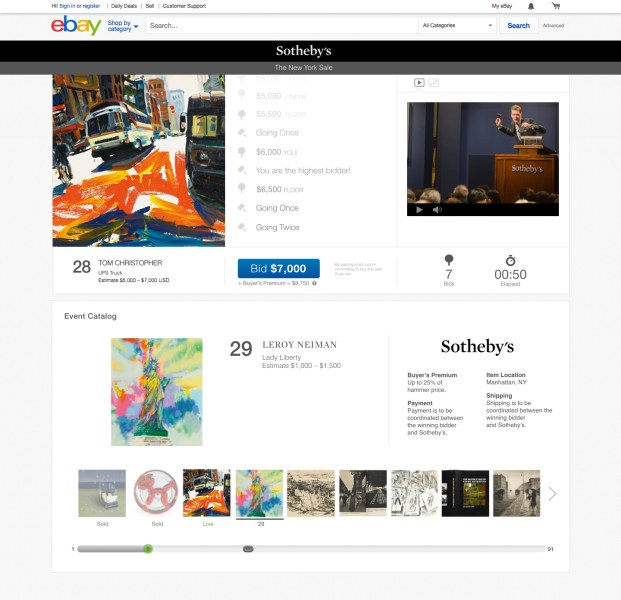 EBay teamed up with live auction site Invaluable in May of last year, to build a live auction platform. So far, eBay has hosted a mix of auctions through Swann Auction Galleries, Heritage Auctions, and others, and already live auction bidders are proving to be return customers, says Ford. Since launching in the fall, she says, live auction bidders have purchased an average of four items.

Ford also says that eBay has no problem selling high-end items. An acetate record of Elvis singing live, for example, recently sold for $300,000. According to the company’s numbers, every day 3,500 auctions on eBay close above $5,000. But by working with Sotheby’s, which has exclusive access to high value items, eBay is hoping to increase the number of large daily sales.

Art and collectibles accounts for $8 billion of gross merchandise volume for the company, and that category hosts 37 million active buyers, says eBay. Live auctions were a natural way for the company to grow this section of the market and its blossoming relationship with Sotheby’s is just the beginning.

“We believe that eBay live auctions is a billion-dollar-plus business at scale, so we’re going to be investing in this business for the long term,” says Ford.

With eBay splitting from PayPal later this year, there’s been a lot of pressure on the auction site to develop a plan for revenue growth post spin-off. Today’s launch is the company’s first big reveal in terms of a forward looking strategy.

And while building out auction platforms for others is an obvious use of eBay’s technology, rather than the development of something shiny and new, connecting high art with a wider audience could ultimately be a winning bid.