Emsense has developed a set of hardware and software designed to read your mind — specifically, how you react to television commercials, video games and other media, both emotionally and intellectually.

The Monterey-Calif. company is trying to improve on established neuroscience technology called EEG (electroencephalogram) recording by offering a better way to tell marketing directors and video game developers which parts of commercials or video games people don’t like. The company gets this data by paying people to be guinea pigs, to come in, wear its EEG-sensing headsets and watch TV or play video games.

EEG recordings pick up electric activity in parts of your brain as you processes information about what you are doing. While there are other ways of measuring brain activity, and more emerging every day, EEG recordings can detect changes in brain activity to within a fraction of a second, and the techniques require less of testers.

The company says it has a combination of hardware and software that can make testing people’s responses to media far cheaper and easier than the alternative option for reading an audience’s collective EEG recordings — EEG devices used in medical labs typically have nodes covering your head, and take up to an hour to put on (example pictured below). 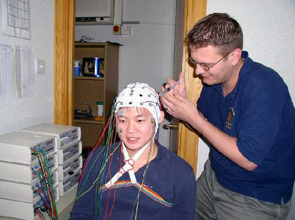 Emsense offers a simpler, two-node headset that also detects information from your vital organs, the responsiveness of your skin and eye pupils. It takes seconds to put on.

Then, its software gathers data from each information source on each person, aggregates the data across hundreds of people in a test group and sorts the data into two lines in a graphical interface. One line shows what Emsense considers to be a measure of the “emotion” the average user experienced, the other line shows “intellectual thought.”

However, getting a two-node EEG device to provide enough accurate information to be broadly useful may be “a monumental obstacle,” said this neuroscience blog last year, noting Emsense’s efforts.

We couldn’t get the company to divulge its secret sauce for how it determines the meaning of these lines — or about much else in its business. While the technology is fascinating, success for the company will be when it can help its clients sell more video game titles and make commercials that are convincing to viewers. 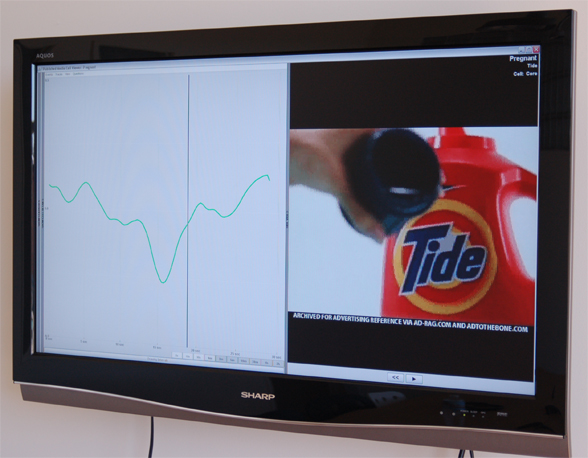 That said, the demonstration given to us by the company showed clearly where commercials did well or poorly with test audiences. We could track upward spikes in the graph where the audience found a joke funny, a video game attention-grabbing, or a commercial somehow appealing.

The company is already working with large brands in advertising and gaming, but is not publicly disclosing those companies’ names at this point — maintaining a low profile aside from turning up at video game confererences, and demo’ing their technology to NPR.

Neuroscience labs and hospitals have been using EEG for decades to help them learn about the nature of mental disorders, the long-term effects of violent video games, and other important academic and societal questions.

Academic researchers in Germany are working on a complex, brain-controlled headset that a severely handicapped person could use to communicate with others more easily and note that the big breakthrough will be a “contact-free EEG, something that looks like a cap.”

Other commercial applications have also been developed based on EEG.

Emotiv’s Project Epoc, for example, is an EEG headset that senses thoughts, feelings and expressions — but the goal is to allow video gamer’s brains to control their games. The company claims the headset connects wirelessly with all game platforms, including computers and gaming consoles.

The testers themselves don’t seem to mind what Emsense puts them through, if this blog is to be believed:

So I do this thing where I go to this office, I watch television commercials for about twenty minutes, take a five minute survey, and they give me $20. Great deal, really. Sometimes they let me play video games for an hour and a half, sometimes the video games aren’t even out yet, either way, I still get the $20. Being a broke person, just out of college studentdom and just before having a real job, I don’t mind going in to a place that’s willing to just hand me twenty dollars to watch television or play video games. You should try it. I’ll plug them really quick, go to emsense.com and sign up. You’ll get twenty bucks! that is, if you live in or around Monterey.

The company has received an undisclosed amount of funding from Tim Koogle and other angel investors.