As with Square, iZettle offers merchants a physical card reader and app, allowing them to easily accept card payments from customers. There are a number of other similar players in Europe, including Rocket Internet’s Payleven, based out of Germany, and London-headquartered SumUp.

Today’s news also heralds a brand-new service from the Stockholm-based startup — iZettle Advance will offer merchants a cash advance on future card sales. It’s effectively a lending program, with companies borrowing against projected income, paying the money back in instalments each day in proportion to card sales. 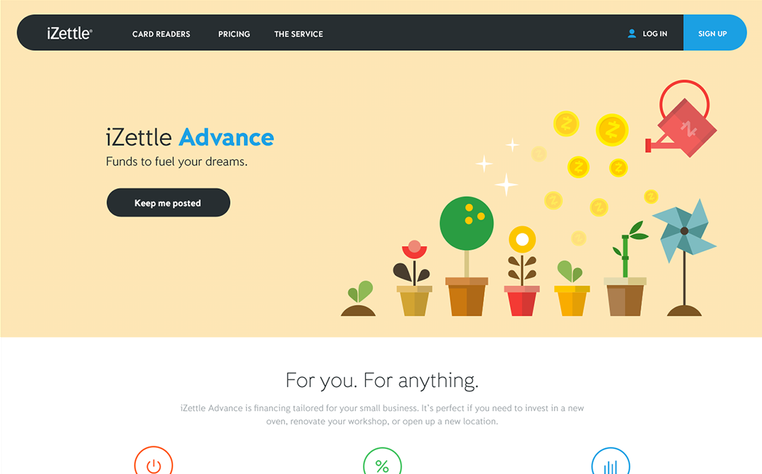 This follows a trend we’ve seen elsewhere in the online payments realm — Square has offered Square Capital to U.S. businesses for some time, and is a near-identical offering to iZettle Advance. PayPal has been doling out loans to small businesses for a while, too.

iZettle says that there are no payback deadlines, and the automated repayments vary in accordance with the merchant’s sales. The company says the advance comes with a fixed fee attached to it, rather than a percentage interest rate, and although the percentage will vary from customer-to-customer, we’re told a typical ballpark fee for repayments is around 10 percent of the borrowed sum.

“We have aimed to build a financing service that’s completely tailored to the needs of small businesses,” explains Carl-Richard Häggman, iZettle’s chief risk officer. “The service allows for small businesses to make the necessary investments in their operations, on their own terms and with minimal administration.”