The trademark face-off between the world’s largest social network Facebook and Lamebook, the website that mocks funny things people accidentally post on Facebook, has come to an end. In a quietly-settled agreement, Lamebook may continue operating under its current name but it must add a disclaimer to its website. Lamebook is also not allowed to seek trademark protection for its name.

“We are pleased to arrive at an agreement that protects Facebook’s brand and trademark and allows for Lamebook’s continued operation,” the companies said in a joint statement, released on Thursday, Aug. 25. “The parties are now satisfied that users are not likely to be confused.”

Joshua Huck, a writer and self-described “ne’er-do-well” behind Lamebook.com, sent VentureBeat a note today that the settlement had happened. There was no widespread announcement. The settlement came just in time for Huck, who will be releasing a book in 2012 with the title Lamebook: The Best of the Worst on Facebook (Chronicle Books). No one at Lamebook is being allowed to comment on the agreement. We’re waiting to hear back from Facebook. 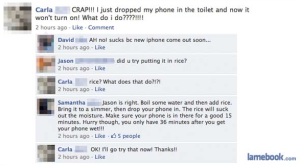 This settlement concludes a twisty tale of lawsuits in which Facebook claimed Lamebook diluted the Facebook brand.

Lamebook received cease-and-desist letters from Facebook attorneys in March 2010 and then Lamebook sued Facebook in November in federal court in Austin, Texas. Lamebook said its name did not infringe Facebook’s trademarks and the name was an obvious parody, making it protected by the First Amendment.

Four days later, lawyers for Facebook sued Lamebook for trademark infringement in federal court in San Jose. Facebook tried and failed to have Lamebook’s suit in Austin (the Western District) transferred to the Northern District of Texas. Perhaps that’s because Austin is a tech-friendly town with a strong entrepreneurial spirit?

Facebook dismissed the San Jose suit in June without prejudice, which means the case was dismissed but could be refiled in the future, and then filed counterclaims against Lamebook in the Austin suit. That’s the suit that was settled on the 25th.

Dizzy, yet? If not, there’s more. Facebook lawsuits against FacebookOfSex.com and Faceporn.com both continue in federal courts.