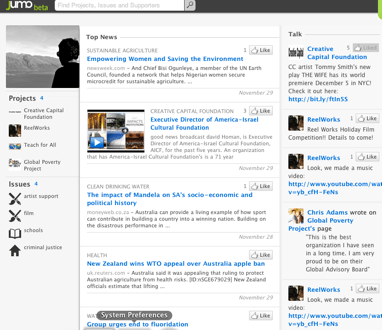 Billed as a social network for social causes and activism, the service aims to help people find and discover issues they care about with their friends, keep tabs on them through news and updates, and over time, help support their work and raise awareness. A nonprofit itself, Jumo is the latest example of broad efforts throughout the industry to bring the energy and innovation of venture-backed startups to the world of philanthropy.

Getting started with the service requires you to connect your Facebook account, after which you’re asked to select various issues, ranging from Arts and Culture to Education, Health, and Human Rights, and rate them according to your level of interest. Jumo then suggests charities and organizations to follow out of the 3,500 it has signed up for its initial launch.

Once set up is completed, the crux of the service is a Facebook-style “Top News” section on its homepage that contains latest activity from your followed issues and charities. Items in the news stream are supposed to be relevant to the your interests and help you keep updated with issues, charities, and people that you care about.

While Jumo has a well-executed user interface and is headed in the right direction, something I found peculiar about the social network is, ironically, a lack of social features. For example, even though accounts are connected to Facebook, there is no way to see which of my friends I can find on Jumo, other interesting people worth following, or invite others. I had to search for my Facebook friends, as well as founder Chris Hughes, to find and follow their profiles.

All this may not be an entirely bad thing considering that it leaves much of the site’s focus on the issues and charities themselves, but if Jumo plans on billing itself as a social network that helps users spread the word and raise awareness, it may not be a bad idea to make it easier to find likeminded souls.

Worth noting is Hughes’ intentional lack of focus on donations on the site.

“We are not trying to build another donation platform. We are really focused on building a social network where you can find compelling projects and issues and connect with them in a way that will be lasting,” Hughes told the LA Times.

That may help differentiate Jumo from Causes, a similar application started by Sean Parker and Joe Green, two entrepreneurs with similarly close ties to Facebook’s founding circle, which has reached 119 million users over its four years of existence. It has a more overt focus on fundraising, with prominent “Donate Now” buttons and windows which pop up suggesting donations.

Jumo is based in New York and has raised $3.5 million from eBay founder Pierre Omidyar’s Omidyar Network, the Knight Foundation, and other individual backers.