Major television events are continuing to see good results when they integrate social media, especially using services that let people take their social networking identities with them around the web. The latest example is media conglomerate Turner Networks, which recently told AdAge about its experiment in letting users log in and chat to each other using Facebook, MySpace and Twitter while watching the NBA Eastern Conference Finals and last weekend’s NASCAR race, the Pocono 500, on Turner’s home site.

Turner’s results showed Facebook came out on top in both instances, but MySpace users messaged each other more. Twitter trailed the others in both traffic and information-sharing. As these sites grow — or don’t grow — their integration services are becoming powerful new ways for TV companies to reach new users. The broadcaster used widget-maker Gigya‘s Socialize authentication service to let people log in through the site of their choice while watching the two events. 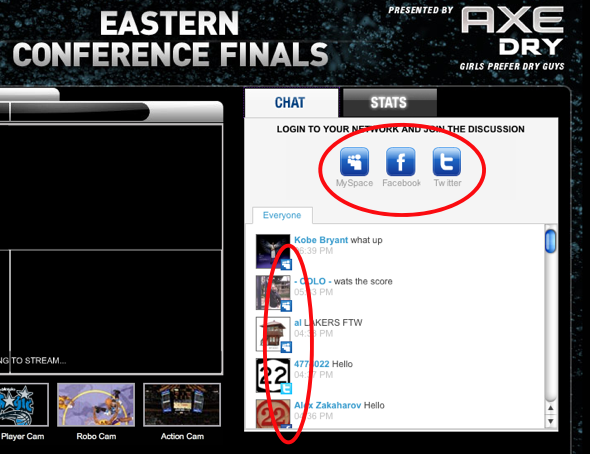 For more, check out the now-dormant live NBA site, here.

Some third-party perspective on traffic

What do these numbers mean? It’s important to note that the broadcaster is only sharing percentages. To put this in perspective, here are the most recent numbers on all three social sites, from web analytics firm Compete. While Compete isn’t always accurate, it tends to capture trends. In May, it reported Facebook having 82.9 million users in the US, with an additional 65 million users on Connect, as Inside Facebook notes. MySpace, meanwhile, had 56.9 million monthly unique visitors; MySpaceID has just rolled out, and Compete doesn’t seem to be tracking it clearly. Also, Twitter came in third at 19.7 million.

Shockingly, considering Twitter’s recent growth and corresponding press coverage, the microblogging service saw only one percent growth over April — less than MySpace’s two percent growth. That’s in contrast to Facebook’s 8.5 percent growth, with 7.9 percent on its home site and 14.0 percent on Connect. Note: earlier signs of Twitter traffic flattening have already showed up on Google Trends, in terms of press coverage and search volume, as we’ve covered.

To be sure, third-party traffic estimates tend to run high — self-reported numbers from Facebook are typically roughly a quarter or so lower than what Compete suggests. It’s also hard to tell what’s going on here because Facebook doesn’t usually give out US traffic and Compete doesn’t cover outside the US. MySpace, for its part, often quotes Compete rival comScore’s traffic numbers (comScore, for what it’s worth, also regularly estimates Facebook’s traffic to be far higher than Facebook says it is).

Also, for what it’s worth, comScore reported 17 million unique Twitter users in April, with Facebook coming in at 67.5 million and MySpace at 71 million. ComScore won’t come out with its May numbers until later this month — we’ll see what that analytics firm shows, then.

In terms of overall traffic, Facebook seems to still be killing it. Facebook Connect does, too, although one wonders how Compete is counting unique visitors. When a user signs in to another site using Connect, the site pings connect.facebook.com, and Compete tracks that domain. In terms of US users, aren’t these same unique visitors also visiting Facebook.com, the home site?

While Facebook Connect has been live since last year, key parts of MySpaceID have only rolled out in the last couple of months. It seems off to a good start, though, and as more of its users — and third parties — become familiar with it, expect it to grow.

Now, Let’s do what tech blogs like to do most and talk about Twitter. It certainly has a nice presence already, considering how quickly it’s grown from just a few million users months ago. The flattening growth numbers may not be what’s really going on — perhaps more people are using third-party services that integrate Twitter, that Compete isn’t counting? Considering Google Trends — and other recent studies showing unused Twitter accounts — perhaps the service isn’t keeping up with the hype. Or perhaps, as we’ve covered, it’s just taking people longer than a couple of months to really start using Twitter.

Or, perhaps, Facebook’s recent redesign has done a good job of letting people micro-message with their real friends, while Twitter has been co-opted by media types and marketers, and other self-promotionalists who could be making the Twitter experience spammy for new users?

Perhaps it’s time for Twitter to implement filters, so people can easily track tweets from their real friends, or other interest groups? What if I wanted to just send tweets about a basketball game back to a group of my friends who I already like to tweet about basketball with? Some sort of interface for doing so could make Twitter more relevant to the average person.

Given Turner’s data, should companies integrate with as many social networks as possible or is there one in particular that matters most?

One important thing to remember is that each site — Twitter, Facebook, and MySpace — is somewhat different from the others in shaping how people use it across the web. Facebook is about just sharing information with your real friends. MySpace is more focused on discussing professionally produced content like music, television and movies. Twitter is more of a broadcasting service, that lets you easily share lots of information publicly through 140-character messages. But they are becoming more similar to each other — Facebook’s redesign in March emphasized Twitter-like status updates, for example.

So the best advice for content producers, at least for the short term, is probably to spread your bets across all three players — like what Turner has done — if not additional services. Turner notably opened to MySpace and Twitter for its recent experiments after seeing solid results when its CNN subsidiary tried out just Facebook Connect for the presidential inauguration in January.

At least, spread your bets until its clearer what’s behind Twitter’s low numbers and until it’s clear what kind of behavior among viewers, such as most viewers signed in or most messages sent, proves most valuable to content companies in the end.