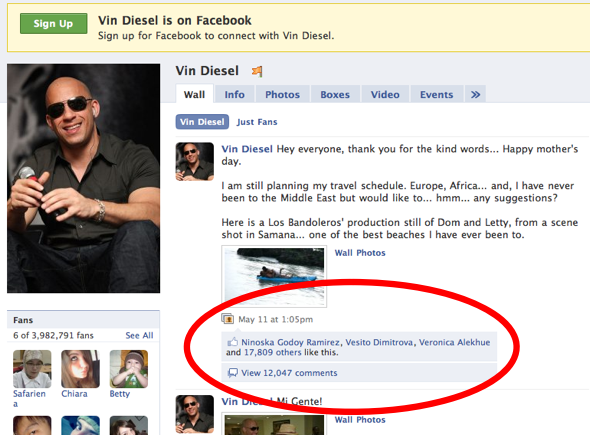 Facebook made a seemingly minor change to how its public profiles work earlier this week. Previously, if you were logged out of Facebook you could still see public pages and the first names and thumbnail photos of fans but not any of the comments from users. Now, when fans of these promotion-focused profiles leave a comment or click on the thumbs-up “like” button, these comments are publicly viewable. Similar to the previous logic, last names of commenters are omitted, though they are included for those who simply “like”.

The result is that now you can see tens of thousands of comments and likes for movie stars like Vin Diesel (whose profile is abnormally popular for some reason) without even having to log in. So could third-party developers and search engines, as Nick O’Neill surmises after spotting the change earlier today. However, Facebook tells me the chance of an individual comment being indexed is small because comments are quickly pushed below the fold on these pages and only a limited number of comments are on a page when the search engine bot visits it.

Facebook’s stated mission is to help people share information, but the site is a somewhat closed network comprised of many real-world relationships — psuedo-competitors like Twitter are more explicit about public sharing, and give third-parties full access to user information. Facebook recently made it possible for third-party developers to access a Facebook users’ stream of status updates, comments and other information from their friends. But, the catch has been that users had to explicitly grant a developer permission to access their own stream. These streams contain information from users’ friends that those friends may not want to generally share with developers, so Facebook restricts how developers can aggregate data these streams.

Public profiles, formerly called Pages, are one of Facebook’s answers to its closed, real-world nature. These profiles, unlike regular user profiles, are designed for celebrities, companies and other entities who want to be as public as possible. With the recent change, Facebook decided that anything anyone says on one of these pages should be public, as well, although it is only associated with their first name and a thumbnail of their profile picture. Presumably, users who have been leaving comments on these profiles are already clued-in by the word “public” in “public profiles” — I would be surprised if they get upset about comments on these pages now being fully public, especially if it is only associated with “John” or “Sarah.”

Facebook has also made public profiles and some information from user profiles (like people’s names) publicly available on the web. The result has been more Facebook pages in search results, and more traffic to Facebook. As O’Neill points out, making comments available could contribute further to that.

And, while Facebook has yet to make public profile streams available to developers, these changes suggest that it will. Of course, there’s the matter of how developers might use these streams. Perhaps some sort of celebrity news aggregator that parses comments from users and finds the funniest ones?