Mark Zuckerberg let the public in on his “metaverse” ambitions just a few weeks ago, setting off a firestorm of discourse around the kinds of virtual worlds found in Snow Crash and Ready Player One — and what it would look like if Facebook created one in real life. Yesterday, we got a look at where the company is on this journey: a virtual conference room.

Depicted as a legless floating figure, Facebook’s founder yesterday appeared in such an environment to unveil Horizon Workrooms, a VR-powered app for Oculus Quest 2. The experience allows colleagues to represent themselves as cartoon-like avatars and work together in animated 3D virtual spaces. To some hoping for an alternative to Zoom, it’s exciting stuff. But many founders, executives, and employees are wary, citing objections to Facebook’s data privacy practices and known issues with misinformation/disinformation, hate speech, and violence-inducing content (such as the bomb threat unfolding near the Capitol just shortly after the Workrooms news broke, which the company allowed to livestream for hours).

And beyond uneasiness about Facebook’s ownership of the platform, some people aren’t sold on the concept or sure it’s really solving a problem. There’s also a feeling VR is still more novel than it is useful.

Prolific tech founder and investor Mark Cuban, who says he’s “very active and involved in VR,” told VentureBeat the technology has “one fatal flaw: There isn’t one single daily use application.” He explained: “People are always amazed when they try VR goggles. But when they take them off, there rarely is a compelling reason to use them again and again. Until there is a daily use case so that people want to have their goggles readily available, Facebook will struggle getting people to buy them and become comfortable with them, whether it’s for work or play.” 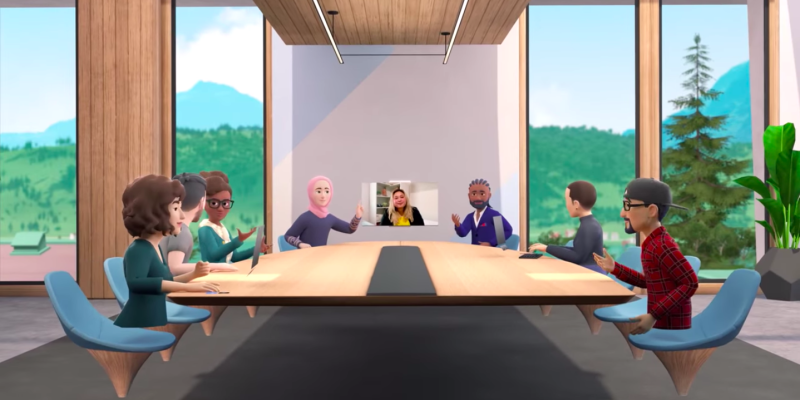 VR for the workplace

The concept of escaping Zoom fatigue by immersing ourselves in virtual worlds isn’t totally novel, and Facebook certainly isn’t the only one doing it. In March, Microsoft launched Mesh, which lets colleagues interact with avatars in AR-powered virtual spaces and even pass “objects.” There’s also Holopod, Imverse, and Spaceform, which are all vying for a piece of the virtual meeting market with holograms, avatars, and the like. Spatial is another competitor, with a product that enables holographic-style virtual meetings on Oculus Quest 2.

Earlier this year, Ericsson published a report suggesting the “dematerialized office” will take hold by 2030, meaning people will interact professionally entirely in virtual spaces. Additionally, IDC recently forecast worldwide spending on AR and VR to grow from just over $12 billion in 2020 to $72.8 billion in 2024. That figure encompasses much more than workplace apps, but we know commercial use cases are making up a growing portion of AR and VR spending worldwide. In the Asia Pacific region, spending on commercial VR/AR technology has already passed that of consumer spending. The primary use cases, however, are training, industrial maintenance, and retail showcasing.

Zuckerberg said during his briefing that Facebook employees have been using Workrooms for internal meetings for about six months. Almost a fifth of Facebook employees — nearly 10,000 — are now working on VR- and AR-related projects and technologies, but the general public isn’t as sold on the use case. According to a recent survey from software studio Myplanet, VR in the workplace is among the least accepted uses for the technology — 49% of respondents expressed discomfort at the idea, while more were in favor of using VR for gaming, movies, education, “travel,” and calls with friends or family. And as Cuban mentioned, even those who love VR don’t necessarily see themselves using it regularly in the long term.

Jana Boruta, director of events and experiential marketing at HashiCorp, told VentureBeat her company recently created a virtual world for its employee summit, complete with meeting areas and activities. “Employees were able to walk around the world we designed as 2D avatars with their actual faces showing on the screen,” she said.

But people stopped logging in after a day or two “after the nostalgia wore off,” according to Boruta. She said her team found people enjoyed this experience, but not as a permanent way to connect with each other.

“The questions I’m asking myself around Facebook’s Horizon Workrooms are: What does attending a meeting in a VR setting with colleagues actually accomplish? Can you create meaningful connections with a person’s avatar versus seeing someone’s actual face and features? Will this just be a fun tool that could actually have negative results, such as becoming a distraction?” she said.

Ben Lamm, a prolific founder, most recently of machine learning company Hypergiant, had a similar gut reaction to the product. “I’m not sure it really adds value over the current collaborative video tools in the market,” he said. “At its core, it’s also a sales tool to expand Oculus 2 hardware sales and make people more addicted to the Facebook universe. Facebook has historically failed us in numerous ways in the past. I’m not ready to let it also take over my work life.” Facebook was early to virtual reality, paying $2 billion for headset startup Oculus VR in 2014. But the company is still widely associated with the raft of issues on its main social network, with privacy concerns, in particular, spanning every part of Facebook as a company. For this reason, Lamm’s feelings were echoed by many founders, executives, and employees VentureBeat spoke to about Horizon Workrooms. Some people are interested in the concept, but not if it’s coming from Facebook.

“Given Facebook’s past history with data privacy, I’m not sure they’re the right player to lead this effort,” said Angela Benton, founder and CEO of user-provided data company Streamlytics, an all-remote company of 13 employees.

She finds the idea of the metaverse “quite powerful” and believes virtual remote work environments like Horizon Workrooms will catch on. But she’s looking toward a decentralized future and doesn’t think user data associated with any metaverse-type company should be centralized with Facebook. “I don’t think this is something that I’d invest in for my team,” she said.

BiggerPockets founder Joshua Dorkin, who now advises several startups, agreed that Facebook has a trust problem and that this will impact organizations’ willingness to adopt Horizon Workrooms.

“Given all of the trust issues that people have with Facebook — thanks to their history around tracking, invasions of privacy, disinformation, and beyond — I find it hard to believe that corporations will be quick to jump in and adopt their new VR technology,” he told VentureBeat.

Peter Allen Clark, a tech and business editor for Time Magazine, feels similarly, saying he “definitely has lingering privacy and harassment concerns.” He also got a chance to try the app. And like VentureBeat’s own Dean ​​Takahashi, who also demoed Horizon Workrooms, Clark really appreciated the audio experience. But mostly, he just enjoyed the change of scenery.

“The more I think on it, I did have a pretty good experience in that space with that tech,” Clark told VentureBeat. “It’s tough to lean too much onto that, because it could just be a novelty. But after a year and a half of remote working, it was honestly refreshing to have a new way to experience a conference call.” He added that he’s not sure if he’d want all of his calls to take place like this, but he’d “sure like some of them [to].”

It’s hard to imagine this launch receiving as much buzz without the backdrop of the pandemic (and as Lamm puts it, Zuckerberg’s “co-opting” of the term metaverse). In fact, the positive reactions to Horizon Workrooms largely invoked the pandemic and a desire for alternate ways to collaborate remotely.

“Maybe I’m the minority here, but I’d much prefer this over Zoom,” Taylor Lorenz, a technology reporter for the New York Times, tweeted following the app’s unveiling. “There’s just something about physical presence and shared space you undeniably [lose] over Zoom. If we’re heading to a remote-forward future, having those shared spaces is key, especially when you’re doing creative work. Seems like a step in the right direction at least.”

Peter Bailis, CEO and founder of data analytics company Sisu Data, told VentureBeat “there’s real promise in more immersive experiences like Facebook’s Horizon Workspaces or Google’s Project Starline,” a video chat tool that makes it appear as if the person you’re chatting with is right in front of you in 3D.

“There’s something tangible about in-person collaboration that is hard to replicate, and this VR approach could provide a compelling intermediate option, without the time, hassle, and expense involved in full-time, in-person workplaces,” he said, adding that he doesn’t think we’ve yet fully optimized our existing places for virtual work.

Dorkin echoed this sentiment. “I think the VR tools have the potential to bring people together,” he said. “But I’ll be waiting for someone else to develop their own version.”