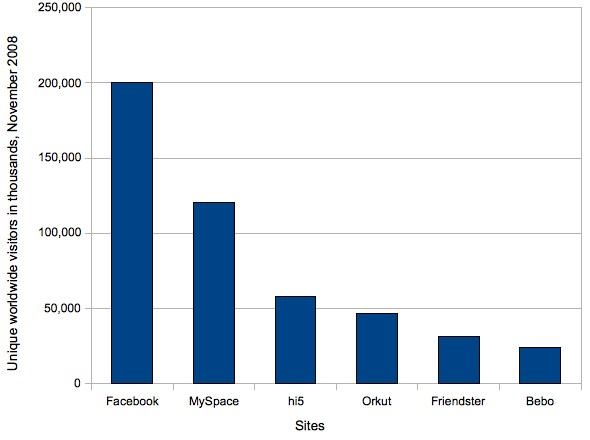 Facebook has grown to 150 million users this month, more than half of whom use the site every day, according to company chief executive Mark Zuckerberg. Other social networks, like MySpace, Friendster, hi5, Bebo and Orkut, have also become popular around the world over the last decade, and they all boast tens of millions of users. But none are as large or growing as fast as Facebook

Take a look at the comScore chart, above, and the tables below. Facebook hit 200 million unique visitors two months ago, according to the most recent available data from comScore, after growing a blistering 116 percent from a year earlier.

Important note: the discrepancy with Facebook’s internally-reported numbers is due to comScore’s measurement techniques, as well as differences in how it defines visitor. It’s not clear how different comScore’s numbers are from other social networks’ internal numbers, but comScore is generally accurate, so for comparison purposes the trends among the sites is clear.

[Update: Hitwise has provided us with U.S. December traffic numbers. Take a look. Only Facebook is growing.]

The site has differentiated itself as a place where you share real information with real friends in a secure setting — in spite of launching years after some of its rivals. It started on college campuses in early 2004, and only let you connect with people you knew on campus. It opened up over the years to new “networks” — high schools, companies, and eventually cities and countries — but it always retained this concept of privacy. While rivals like MySpace made your user profile public, Facebook even today only lets other see excerpts of your profile unless they’re friends with you or in the same network as you. The result is that Facebook has near-universally convinced its users to provide real information about themselves; on MySpace, for example, people often create and use fictional profiles.

Facebook built on its real-world foundation through other features it has rolled out over the years, like its news feed showing a running stream of what your friends are doing on the site, and status updates that let you tell your friends what you’re up to. The company introduced a redesign this fall that, among other things, focused the interface even more on these features. In 2007, it let outside developers build applications that live inside of Facebook. Applications on the platform can use friend relationships and communication features like news feeds to promote themselves. More than 95 percent of users have added at least one application — presumably, these apps have helped users come back to the site more often, stay on it for longer, and give them another reason to invite their friends. The platform has not been without controversy, as we’ve covered extensively, but it continues to draw thousands of developers.

Facebook has also introduced a tool for users to translate its site into 35 languages so far, with 60 more in development. More than 70 percent of of users are now outside of the U.S. — although its U.S. traffic is rising, too, as you can see below.

What are the other companies to do?

They’ve launched their own versions of news feeds and their own developer platforms. Some, like hi5, also have their own user-driven translation services. But they’ve all evolved differently. They don’t seem to have the same vision for getting users to add their real identities, and then help them to share information more easily. Instead, many — like MySpace — are more focused on entertainment. MySpace Music launched last year, for example, and lets users create and stream playlists of music on the site.

Sure, none of these social networks are billion-dollar businesses right now. One can only assume that they’ll eventually make a lot of money on advertising through getting the daily attention of millions. With revenue the big remaining question, what these sites can’t afford in the meantime is ceding traffic to Facebook.