Given the complexities and heated feelings around the subject of net neutrality, the Trump-appointed chair of the Federal Communications Commission naturally decided the best thing to do was make a video giving critics the finger.

Posted at right wing “news” site The Daily Caller, Pai’s video is basically about his “plan to restore internet freedom.” He then proceeds to let you know what you’ll be able to do after he wipes clean those evil Obama-era regulations. Which, he concludes, is everything you could do before.

Of course, this might lead one to ask: Why bother getting rid of net neutrality if it’s not affecting anything? But that might be asking a bit much of Pai, who by all appearances may not have been in a lucid state of mind at the time — this based on his judgment that making the video was a good idea.

Because in doing so, Pai has made a bid to be considered the Clown Prince of all Trump nominees. It’s not just that he speaks to critics like simple-minded children and belittles their concerns. It’s not just that he literally looks like a complete idiot. Oh, wait. Yes, maybe that is it. He does look like a fool, even throwing in a woman smoking a cigarette for no reason as an additional FU to liberals. 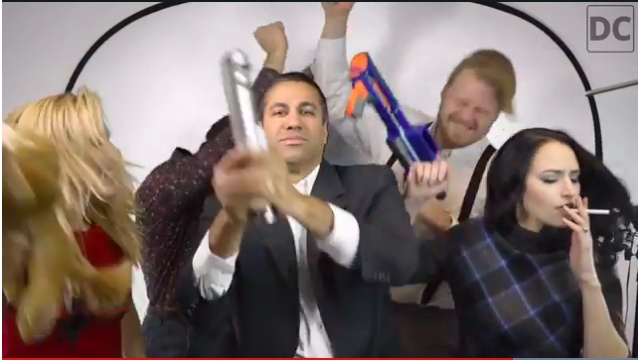 But we can also conclude, based on this video, that he has no idea what net neutrality is, or why it matters. Equally, he believes much of America to be similarly idiotic and uniformed on the subject.

Best of all, however, may be that Pai is completely blind to the fact that his attempt at humor and mockery has so completely missed the mark. Instead, he simply reveals his own idiocy and unsuitability for his position.

Which would be hilarious, were it not so tragic.