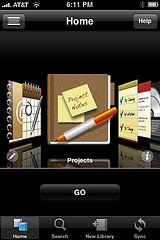 Grey-haired Mac users probably remember Filemaker, an easy-to-use database application for the first Macintosh computer in 1984. Some of them still use it. I know a reporter who maintains a decades-old Filemaker database of people he’s spoken to on the job. Filemaker Pro is expensive — around $200 online — but it’s not hard to figure out compared to, say, MySQL or Oracle, and it has a reputation for not crashing and destroying months of carefully entered data.

Now, Filemaker the company is trying to capture a new generation of customers by meeting their expectations for low, low prices. Filemaker Pro for Mac or PC lists for $300. Filemaker’s Bento, a Filemaker-compatible application aimed at beginners, lists for $50. But earlier this year, Filemaker released Bento for the iPhone in Apple’s app store at the crazy-low price of $4.99.

At five bucks, it’s a lot of app for the money. Bento builds real Filemaker databases on your iPhone that are automatically backed up by iTunes whenever you sync the iPhone with a Mac or PC. It’ll store, according to the documentation, “text, numbers, dates, times, durations, pictures, sounds, video clips, pop-up choices, check boxes, prices, rates, addresses, phone numbers, ratings, web sites, e-mail addresses, instant messaging accounts,” and then some.

Five bucks. No hidden extra costs. No need to install the company’s pricier desktop wares. Why so cheap, I asked?

“What we set out to do was introduce an entire new generation to databases,” Ryan Rosenberg, the company’s VP of marketing, told me in a phone interview. The company’s thinking was that a super-low price would open up whole new customer markets. Some would become desktop customers, surely, but mostly the plan was to maximize the app’s reach among people who wouldn’t see a reason to pay serious money for a database program.

Bento on the iPhone comes with 25 templates for databases with household and small-business themes: Vehicle maintenance, travel expenses, club membership lists, etc., and it’ll track your New Year’s resolutions, too. The program does lack some of the desktop version’s add-on features, such as the crowdsourced template repository, where several hundred customer-built templates are available. But Bento’s iPhone databases will definitely work with Filemaker’s premium desktop applications.

The app has already sold well over 100,000 copies, putting it near the top of Apple’s productivity category. The low price gets people to try it, but Rosenberg says Bento’s real appeal is that, unlike Web-based databases such as Quickbase or Zoho Creator, Bento runs right on the iPhone and stores its databases in the phone’s memory. It doesn’t require that AT&T’s network be reachable. “What the iPhone has done is throw the whole idea that everything should be an app on the Web on its head,” he said. “There’s a lot of demand now for stuff that runs right on the phone, because the experience is better.”