Mozilla today launched Firefox 34 for Windows, Mac, Linux, and Android. Major additions to the browser include a built-in video chat feature, a revamped search bar, and tab mirroring from Android to Chromecast.

Firefox 34 for the desktop is available for download now on Firefox.com, and all existing users should be able to upgrade to it automatically. As always, the Android version is trickling out slowly on Google Play.

Before we dive into the features specific to each platform, it’s worth noting that Mozilla has disabled SSL version 3.0 in Firefox 34, as promised. The company made the decision on the same day that Google disclosed a serious security vulnerability in SSL 3.0 on October 14, the attack it dubbed Padding Oracle On Downgraded Legacy Encryption (POODLE).

The biggest addition for the desktop platforms is Firefox Hello, a new Web Real-Time Communication (WebRTC) calling feature powered by Spanish carrier Telefonica. In Firefox 33 beta, Mozilla first introduced an experimental WebRTC feature that let users make free voice and video calls without needing to download additional software or plugins, or even to create an account.

Now the company is going further by partnering with Telefonica to providing users with what it calls “the first global communications system built directly into a browser.” Firefox Hello is powered by the OpenTok real-time communications platform from TokBox, a Telefonica company. 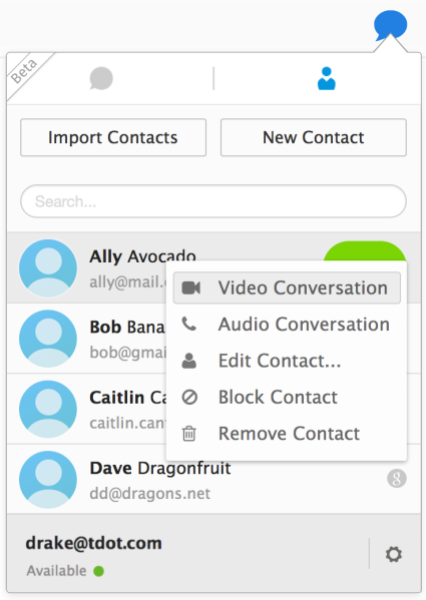 Mozilla wants to ensure users don’t need to hand over personal information in exchange for using its free communication service. Not only do you not have to sign up for a service, but you also don’t need the same software or hardware as the person you want to call, since WebRTC is compatible with Chrome and Opera browsers as well.

To use it, open Firefox, click on the chat bubble icon inside the customize menu, and connect with anyone who has a WebRTC-enabled browser by sharing the generated callback link. To call you, they’ll naturally need Firefox 34.

While an account isn’t required, Firefox Hello does let you sign in with your Firefox Account so you can initiate or receive direct calls with other Firefox Account users who are online, without having to share a callback link first. You can be reached on every computer that you’re signed into.

Firefox Hello also offers contact management. You can add contacts to your address book manually or import contacts from your Google account (select “Import Contacts” and then give Firefox Hello permission).

For context, WebRTC is an open project that lets Internet users communicate in real-time via voice and video by simply using a WebRTC-compatible browser. It enables Web app developers to include real-time video calling and data sharing capabilities in their products, which can range from games to video conferencing tools.

Firefox has supported WebRTC support for months, and Mozilla has been showing it off in various forms. Firefox Hello is the latest attempt to build something users may actually want to use right in the browser, meaning they don’t have to wait for developers to build an app that all their friends have to download.

The next big change is the new search bar, which Mozilla first revealed less than a week ago. When you type a search term into the Firefox search box, a list of suggestions will update with each character. In addition, a new array of buttons below these suggestions will let you pick which search engine you want to send the query to.

Now you no longer need to perform a web search just to click the first Wikipedia result: you can just choose Wikipedia from the list. In the new “one-click search engines” section under Firefox’s search settings, you can easily show and hide these new buttons: 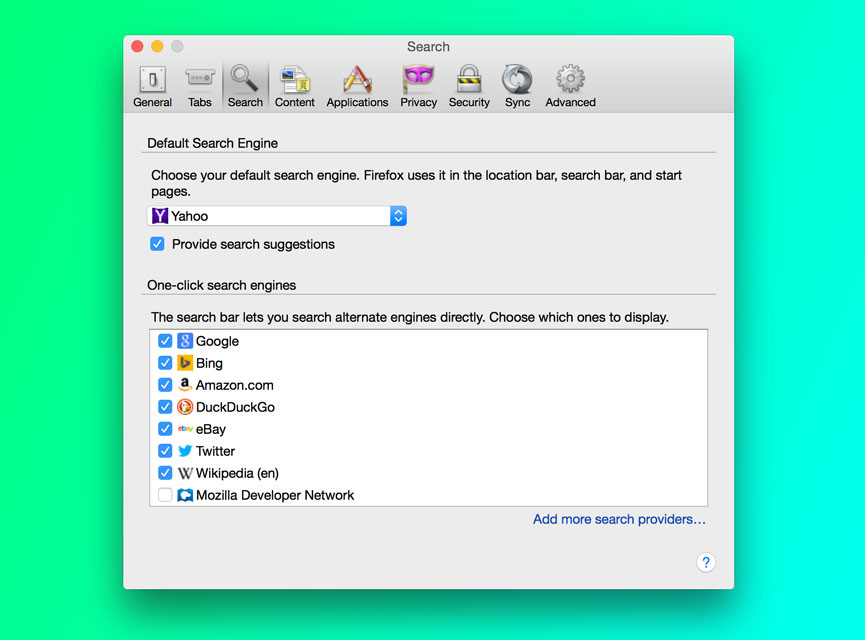 Indeed, in Canada we’re getting Yahoo as the default:

WebRTC and search aside, here’s the full Firefox 34 changelog:

If you’re a Web developer, you may want to get more details at the Firefox 34 for developers page.

Mozilla has been working on various multi-screen capabilities for its Android app over the past few months. In Firefox 33, the company added the ability to send video to Google’s Chromecast and Roku. Today, Android users can now mirror their whole browser tabs to their TV via Chromecast.

In short, any webpage that you’re viewing in Firefox for Android can now be sent to the big screen, if you have a Google Chromecast.

This is the last Firefox release for the year (new versions are released approximately every six weeks). Firefox 35 will be out in mid-January.