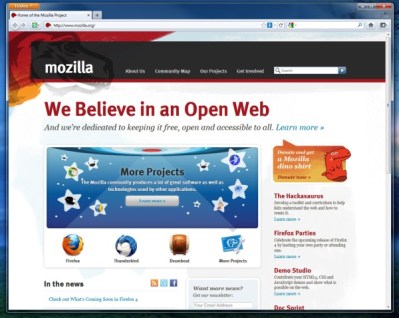 Mozilla’s Firefox 4 browser trounced Microsoft’s Internet Explorer 9 in first day downloads when it launched last week, but now it’s further walloping Microsoft’s browser by snagging twice as much usage in half the time, according to data from NetApplications.

As of March 26, Firefox 4 was seeing a 3.64 percent share of browser usage after only being available for 5 days. IE9, which launched just a week earlier had 1.78 percent after 12 days. The numbers are a clear sign that Mozilla’s hard work has paid off for Firefox 4 and that IE9 will be at a disadvantage for some time since it runs on far fewer platforms (it only supports Windows Vista and Windows 7).

Firefox 4, owing to its open source roots, runs on pretty much every major operating system available, including Windows XP (which Microsoft is no longer developing software for), Mac OSX (don’t expect to see IE there, ever), and Linux. Firefox’s big advantage is Windows XP compatibility, a platform that as of last November held around twice as much market share as Windows 7 and Vista combined. Given the massive number of new features in IE9, it would be difficult for Microsoft to offer a Windows XP version of the browser.

The news also further emphasizes the fact that Firefox’s big browser competitor this time around is Google Chrome, not IE9. Chrome has been steadily growing in popularity over the last few years, thanks in large part to its fast browsing engine, while Firefox’s market share has fallen. With Firefox 4, Mozilla has a shot at convincing its traditional base of tech-savvy users, many of whom switched to Chrome, to give its browser another shot.