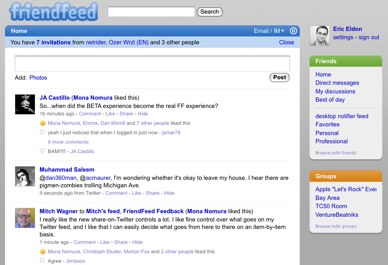 FriendFeed rolled out its redesign earlier this month in beta. The life-streaming service’s changes were controversial because it hid some features in the old interface, and more importantly made everything update in real-time. It’s similar to what Facebook is working on with its own redesign — but many FriendFeed users didn’t want real-time.

However, the results have apparently been good enough for the FriendFeed team that it’s now introducing the redesign to its full user base, as it announced today on its company blog.

And, the launch also comes with some new email features. Considering that the company is comprised of Paul Buchheit (the creator of Gmail) and other early, product-focused Googlers, it’s best to pay attention when it mentions email. From the company:

Feeds are a key way to help people stay in touch with the world around them. Indeed, VentureBeat’s staff uses a private FriendFeed room to share story ideas, edits and much more. In some sense, this is what companies that are trying to build private versions of Twitter also want to do. Yammer, for example, lets you send and receive short Twitter-like messages between colleagues but also includes enterprise features like administrative controls and local hosting. The company has specifically said that it’s trying to replace email. So, it’s interesting that the FriendFeed team — led by Buchheit and Co. — is openly talking about using its own product to replace email. Maybe FriendFeed is becoming more of a competitor to Yammer?

This is all happening as FriendFeed has watched popular social network Facebook mimick or modify many of the features within its own interface, including the “like” button for items you like as well as feed filtering. As FriendFeed keeps rolling out features like email, perhaps it’s differentiating itself better from its giant competitor. Or maybe Facebook will introduce features like email as well. As VentureBeat writer emeritus MG Siegler put it: “You Will Be Using FriendFeed In The Future — But It May Be Called Facebook.”