FriendFeed, the service that culls your activities on various social networks into a single stream, is seeing a surge in new users, at least from anecdotal evidence (including signups that VentureBeat’s staff is seeing).

The increase comes after FriendFeed redesigned its site last week so you can easily read what your friends are up to around the web in a real-time stream. In fact, one of our writers, Dean Takahashi, noted he’s getting more friends signing up to Friendfeed than he’s getting on Twitter. Is the redesign that popular?

Perhaps, but a one reason for the new subscribers is that the redesign makes it easier to find friends on the site who are already your friends on other services, including Gmail, Facebook and Twitter.

FriendFeed, remember, has some similarities to Facebook. You can import your activities from scores of other web sites — Twitter, Digg, Netflix, etc. — and see what your friends are up to when they do the same.

It’s a sort of open social hub, with threaded conversations, and offers a simple button for “liking” shared information. Facebook lets you import activity from other web sites, as well, but that part of the interface isn’t obvious, and the site is currently more focused on sharing information within the site (like photos).

FriendFeed’s strategy is to be the best place to have a conversation with your friends about anything happening around the web. And it’s trying to be an easier, more open way to do this than Facebook. So it keeps trying to absorb more information from the web, especially from Twitter — already a main source of data on the site. 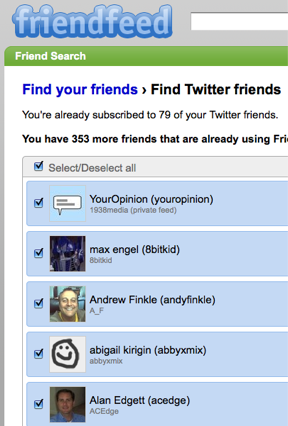 Which is where sign-ups come in. FriendFeed’s new redesign lets it identify your friends using Gmail or Facebook or Twitter in a single click. You share your identity from other sites with FriendFeed, then it identifies people you know on those sites who also use FriendFeed. This is useful for both new FriendFeed users trying to find friends on the service as well as existing users who want to tie their FriendFeed friends closer to their existing social graphs on these sites.

It seems to be working best with Twitter, probably because both services are intentionally freely sharing information. Several VentureBeat writers, me included, noticed a gradual increase of new subscribers to our FriendFeed account since last week, when the new interface for Facebook, Gmail and other services went live. But the Twitter integration, which first became available months ago, just went fully live yesterday — and that has caused the most noticeable spike in new FriendFeed subscribers, as far as I can tell.

Yesterday’s integration makes it really easy to create a FriendFeed account and populate it with your friends from Twitter (or find friends on Twitter who you didn’t know were on FriendFeed if you’re an existing FriendFeed user). You just need to give FriendFeed your Twitter handle (but not your password), then FriendFeed accesses Twitter, matches which Twitter friends you’re already friends with on FriendFeed, and lets you easily invite non-FriendFeed Twitter friends to FriendFeed. You can also import your photo and one-line bio information from Twitter, to make the transition easier. It does this using an open standard for sharing user data across web sites, called OAuth.

Stepping back for a second, which services are people signing up with the most?

Friendfeed co-founder Paul Buchheit says Facebook and Twitter are about tied (and ahead of Google about 2/1). But he says it’s still too early to know [which service most people will end up using to find friends], since Friendfeed announced the Twitter option yesterday. He adds that around 90 percent of people who use the Twitter importer find friends on FriendFeed. Indeed, some Twitter users, like celebrity Kim Kardashian, are apparently mass-subscribing to their Twitter followers.

FriendFeed has already gone to great lengths to suck in Twitter users, and give back to Twitter. For example, last year it began letting you tweet comments to Twitter when you commented on your friends’ shared items on FriendFeed. Facebook, for its part, lets users import their tweets into Facebook, through Twitter’s own application or through other third-party applications — but doesn’t let you share your comments back to Twitter.

Not exactly, it’s more trying to be a better way of using Twitter along with the rest of the web. It has many Twitter-like features, including a way to post short, tweet-like messages for people who follow you to see. It lets you send private messages to other users, like Twitter’s direct messages. But it’s more focused on the same things as Facebook is — developing ways of filtering information based on groups of friends and types of shared items.

So FriendFeed is like a more open version of Facebook, with tighter interoperability with the rest of the web, and especially Twitter. While a wide range of Twitter clients — TweetDeck, Ginx and many others — let you sort tweets into groups of friends or conversations, FriendFeed is becoming the best Twitter client around. The more Twitter users come in to FriendFeed, the more they’ll likely use FriendFeed’s features for sharing information back with Twitter.

That might be why Twitter itself seems happy with what FriendFeed is doing. It doesn’t provide filters or other ways of managing the deluge of information flowing across its service. But it has been working a faster feed for sharing tweets with third parties — and testing it out with FriendFeed. It also seems to believe that this relationship is symbiotic.