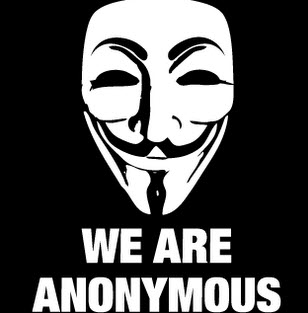 Anonymous, the internet hacker group that has law enforcers chasing after it for various cyber attacks, may not be so anonymous for long.

Web news site Gawker has published a story that describes the inner workings of the internet “hacktivist” group, which has carried out a series of high-profile cyber attacks against establishment organizations. And the chat logs show a big rift within the ranks of the group that may result in the outing of its members.

If the logs are true and they result in some arrests, it shows the internet doesn’t always guarantee anonymity to those who wish it, and that there is always some kind of loose thread that can be unraveled by journalists or investigators.

Right now, it’s hard to tell if the logs are the work of irreverent anti-establishment hacktivists or a bunch of teens joking around. Gawker says it has chat logs of internet chat rooms for the group that ostensibly runs Anonymous and directs its attacks against various internet targets. If the chat logs are real, then those Anonymous leaders are likely to be hunted down by authorities.

The group made headlines when it took revenge against companies like PayPal and MasterCard when they denied service to Wikileaks, the site dedicated to leaking official secrets.

In what some observers called a cyber war, Anonymous claimed to have launched a bunch of attacks in December that took down PayPal, MasterCard, and the Westboro Baptist Church’s web sites and penetrated the computer networks of security firm HBGary. After breaking into HBGary, Anonymous posted 71,000 of the company’s emails on the web. The chat logs show some of the leaders boasting about breaking into HBGary.

The chat logs were turned over to Gawker by two anonymous sources who claimed to be former members of the group. Those sources told Gawker they also turned over the logs to federal authorities and gave the law enforcers the real names of the people who are talking in the logs under nicknames.

The dissidenting former members of Anonymous now call themselves “Backtrace Security” and say that the current leadership has betrayed the roots of Anonymous, which was more fun-loving destructive nihilism, not political hacktivism that Anonymous has engaged in for the past year. A Backtrace member who goes by the name of Hubris told Forbes that it plans on releasing more information in the coming week about the leadership of Anonymous.

The very notion of “leadership” within a group like Anonymous is strange, as the group claims to operate with a hive mind, with no one in charge. But the logs show that there is a hierarchy within the group that doles out assignments, selects targets, and criticizes members who go astray, Gawker said. The logs show that the culture of the hackers involves a lot of swearing and code language. Gawker says the chat logs show that one member of Anonymous was involved in breaking into Gawker itself last December.

Gawker said the logs come from an invitation-only Internet Relay Chat channel — a bare bones chat room that is the preferred means for anonymous communications among hackers. The IRC channel is called #HQ and was used by people with the nicknames Sabu, Kayla, Laurelai, Avunit, Entropy, Topiary, Tflow, and Marduk.

The logs were turned over to Gawker by individuals who go by the handles Metric and A5h3r4 who describe themselves as former Anonymous supporters. They were upset that Anonymous leaders used children and teens in risky hacking operations. And they felt “the bastards are becoming arrogant sociopaths” as a “vigilante group … a mob without conscience.”

The conversations show the group talking about the break-in at the HBGary firm and their next target, Hunton and Williams. They also fret about whether they are under investigation, if anyone is on their trail, how to disguise the leadership of the group, and how to represent themselves to the media. It’s an interesting look into an internet subculture.