Now, the company is opening it up to the public after an apparently successful invite-only phase. Atom is now available for Mac users and is open source, naturally. The company plans on releasing Linux and Windows versions very soon.

“There is no other platform more flexible than the web, and so we built Atom using the same technologies. Extending Atom is as simple as writing JavaScript and CSS, two languages used by millions of developers each day, making it remarkably hackable,” the company wrote in an official blog post. 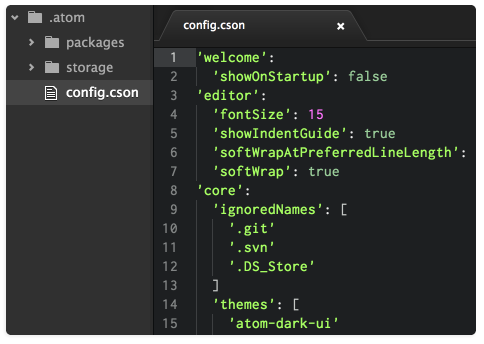 “It’s very much a text editor, but we’re building it with web technology,” said GitHub Atom developer Nathan Sobo in an interview with VentureBeat. On some levels, the project sounds quite like Adobe’s Brackets code editor, which is built with JavaScript.

Despite only being founded in 2008, GitHub has become arguably the most popular code storage site for developers; as of last September, it already had over 4 million users. And with text editors being core to writing code, developing one only makes sense for GitHub.

“We view Atom as a complementary product [to GitHub],” said Sobo.

Chromium, more or less the open source version of Google’s Chrome browser, is at the core of Atom. Chrome’s popularity has been rapidly rising: At last year’s Google I/O conference, the company announced its browser and operating system now had over 750 million monthly active users, up from only 450 million a year prior. This past November, a rumored Chrome IDE under the code name “Spark” also surfaced, signaling a strong interest in Chrome from the developer community.

And if you’re feeling like Atom is looking mighty familiar, fear not, we noticed the Sublime resemblance too.

At Atom’s launch, GitHub did point out that “Sublime and TextMate offer convenience but only limited extensibility. On the other end of the spectrum, Emacs and Vim offer extreme flexibility, but they aren’t very approachable and can only be customized with special-purpose scripting languages.” TextMate is quite similar to Sublime and was actually created on GitHub in 2012.

Atom is a text editor with a user interface familiar to many developers, it’s open source and has extra extensibility (the ability to customize its features), and it’s free, setting it up for rapid adoption.

GitHub developer relations lead Chris Kelly added in an interview that “in the past, the best editors have had strong community,” making Atom’s design one likely to appeal to many developers, and especially’s GitHub’s open source-loving users. The company is keeping an open mind about the editor’s future. “We want to build the best developer experience [and] see what the community is capable of doing,” said Kelly.

GitHub was recently under fire for alleged sexual harassment complaints from a former employee.

The firm was founded in 2008 by Chris Wanstrath, PJ Hyett, and Tom Preston-Werner. To date, GitHub raised $100 million from Andreesen Horowitz in a first round of funding in 2012.