Two years ago, PayPal cofounder Max Levchin launched a new company called Glow, whose sole mission was improving healthcare, particularly in the area of women’s fertility. Having been “extremely happy” with the results of its initial efforts, Glow is now expanding to become a resource for women looking to manage their overall sexual health.

Called Ruby, the new application is geared towards women who are not looking to get pregnant, but still want a tool to better manage their health and sex lives. According to Jennifer Tye, Glow’s vice president of marketing and partnerships, half of Glow’s users are not trying to conceive, but have joined the fertility-focused app for lack of a suitable alternative. 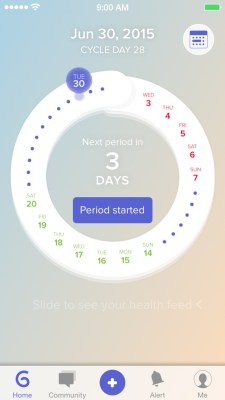 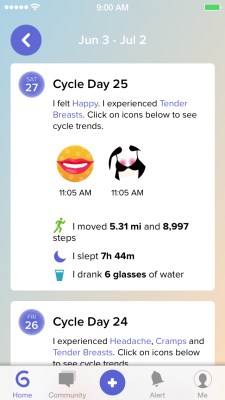 The new application is part health tracker and part social network. Women can input data into Ruby’s Anytime Log –from their current emotional state to physical symptoms, health-related incidents, or other concerns (e.g. Did you have unprotected six? Do you have cramps? Are you stressed?). Data from Apple’s Health App is also entered into the app and analyzed. Ruby’s data science then helps women recognize patterns across their cycles.

Ruby is also interesting from a design standpoint, as it leverages the design potential of Apple’s iOS platform. There is an interactive monthly view which you can rotate on the screen for a historical recap of your symptoms or concerns. Tye says the app was designed to be “fun, quick, and simple, yet covers the key aspects of your health.” 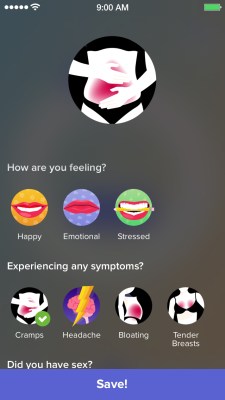 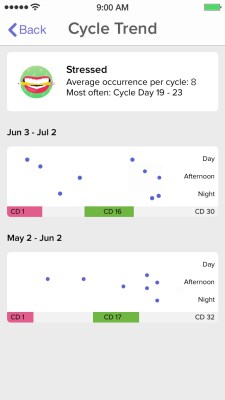 Besides tracking your data, Ruby also features a community where women can ask questions and share information with other users. Glow has partnered with Bedsider.org, an online birth control support network operated by The National Campaign to Prevent Teen and Unplanned Pregnancy, to offer expert information and resources should women need it. The hope is that women who are having difficulty getting answers to health and sex-related questions may find it helpful to connect with someone in Ruby who is dealing with the same issues. Tye tells VentureBeat that all the advice is presented in a sex-positive way to avoid discouraging women from asking questions. Simply put: there’s no shaming here. 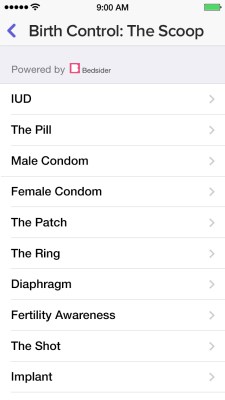 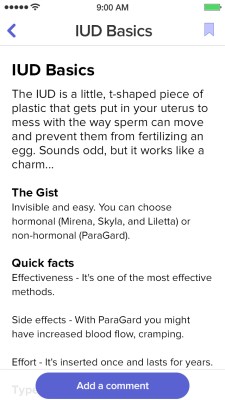 Anyone can create communities within Ruby, but existing forums range across a broad spectrum. Tye explains that there are groups addressing serious topics such as sexual assault, abortion, and unexpected pregnancy, as well as space devoted to lighter queries. Women “need to have a safe environment where they will share and can seek help,” says Tye.

Although you can use Ruby without creating a Glow account, if you opt to establish credentials, your data can be synced between the platform’s apps, including Glow and Glow Nurture, an app focused on the needs of pregnant women. This means that if you’ve become pregnant with Glow but now want to use services from Ruby, you won’t have to start from scratch — all the data can be easily shared.

With all of Glow’s applications, Tye says privacy is taken very seriously and there are members of the company whose role is to ensure the community remains “a vibrant place and safe one.”

As part of Ruby’s launch, Glow has partnered with Huru International, a nonprofit providing menstrual hygiene supplies and sex education to young women in developing countries. Tye shared that women in these communities who lack access to feminine products must often miss school and work during their period. To counter this, Glow will “give a young women a day back” by donating a day’s supply of Huru products for every mention of Ruby on social media using the hashtag #TalkRubyToMe.

With $23 million in funding (of which $17 million was raised in October 2014*), Glow believes it can make an impact on women’s lives. Already more than 50,000 women have become pregnant while using its apps, according to Tye. And now Glow is hoping to contribute to another area of women’s healthcare. But while the resource could certainly benefit women, the question remains whether its users will take advantage of the app. Will Ruby be any different from health trackers that people purchase but frequently fail to update? Forming habits of regular usage will be particularly important with an app such as this, which depends on user input.

Ruby is available in the Apple App Store with an Android version likely coming in the future.

*Disclosure: Formation 8 is an investor in VentureBeat.