The business value of apps can be enormous. According to a 2019 Google survey, 39% of smartphone users are more likely to browse a brand’s mobile app because it’s easier or faster to make a purchase. While one report implies that growth in small business adoption of apps is slowing, Red Hat research found that 79% of U.S.-based respondents’ mobile app strategies have positive returns on investment.

According to Google, Firebase — which is now used by over 3 million apps per month — is gaining a Storage Emulator, which will let developers upload, download, and modify files as they would in production. A module of Emulator Suite, the Firebase service that runs emulated versions of Google’s backend products, Storage Emulator interacts with other emulators to trigger functions and protect access to files.

Beyond these changes, Firebase App Distribution, a tool that distributes pre-release versions of apps to testers, is incorporating support for Android App Bundles, which enables developers to test the binaries Android users install on their devices. And Google is launching App Check, a new security feature in beta that protects access to services by verifying that incoming traffic is coming from an app and blocking traffic that doesn’t have valid credentials.

On the analytics side, Firebase Crashlytics, a component that helps to track and resolve bugs, will soon support custom keys for searching and filtering through apps. Alongside this, improvements to Crashlytics’ NDK and Unity are on the way, including increased visibility into a crash’s root cause through detailed stack traces and enhanced device metadata for Unity apps like GPU, DPI, and resolution.

“We think real-time monitoring will be a game-changer for app developers, because a big, stressful part of development is releasing a new version of your app,” Richards said. “You want to monitor it and make sure that it’s going well. With real-time data, customers are going to be able to understand the performance of their app while it’s being released, so that’s really exciting.”

Firebase Remote Config enhancements are in tow, as well. Remote Config, which allows developers to dynamically control and change their app so that they can test ideas without having to release new versions, now shows more information about parameters, including their values and whether they’re safe to change. The publish flow has been updated to make it clearer which changes are pending. And the A/B test results page has been updated to better organize the remaining data.

Last but not least, Google says it’s launching a new Remote Config service called Personalization in alpha. It’ll give developers the ability to automatically optimize individual user experiences to maximize objectives, like revenue or engagement, through machine learning. After a setup, personalization will continuously find and apply app configurations for users to produce desirable outcomes. 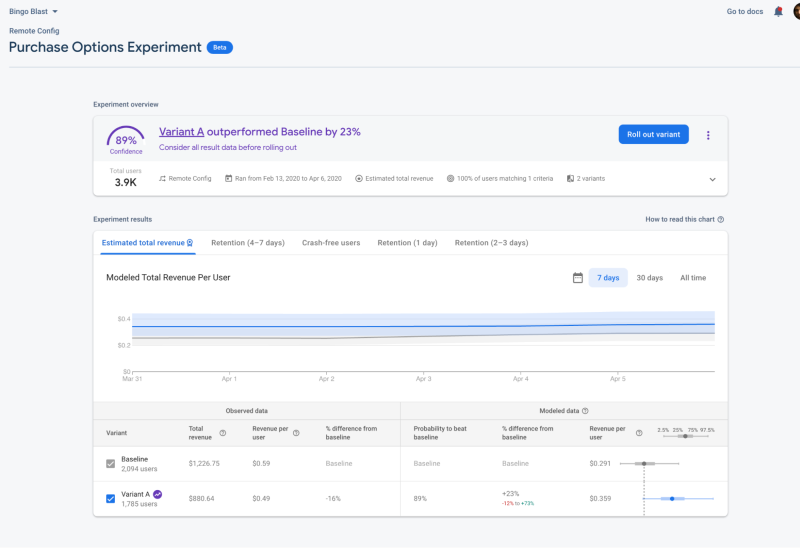 Above: The Personalization dashboard in Firebase.

“Personalization harnesses Google’s machine learning to create unique individual experiences,” Richards continued. “With it, app developers can set up different parameters or variants of apps that, for example, shows ads more frequently or less frequently. Developers tell us what they care about and then Personalization serves those individual variants to each individual user. Personalization is constantly learning, so it might start out with less information and dynamically learn over time to really hone in on what the best personalized experience is for each user.”

Game developer Ahoy Games is among the companies testing Personalization. “Personalization is overall so much more than what an A/B test is, as it continuously optimizes and serves the right variant to the right groups of people in order to maximize conversion goals. It could be thought of as an equivalent of running hundreds of A/B tests daily and slicing and dicing users into many mini segments, all while keeping up with behavioral trends of users because of its continuous nature,” CEO Deniz Piri told VentureBeat via email. “It does all of this automatically, allowing us to fully focus on the product.”

The revamped Firebase stands to benefit developers saddled with monotonous work. Coralogix estimates that software developers create 70 bugs per 1,000 lines of code and that fixing a bug takes 30 times longer than writing a line of code. In the U.S., $113 billion is spent annually on identifying and fixing product defects.

“With these improvements to Firebase, we aim to make app development faster, easier, and streamline your path to business success,” Richards continued. “People are relying on your apps to thrive in our new world — you can rely on us to build, operate, and scale apps.”