Ever since Google kicked off plans to launch its ultra-high-speed fiber Internet service in Kansas City, the rest of the world has been eagerly anticipating a far-reaching expansion.

Today Google Fiber released those expansion plans, which list nine new regions and a total of 34 cities that the company is considering. Some of those regions are Nashville; Raleigh-Durham; Atlanta; San Antonio, Texas; Salt Lake City; and San Jose, Calif. 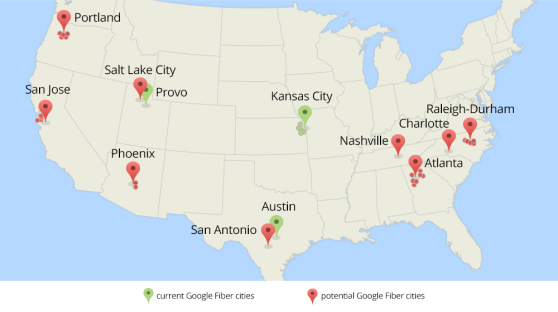 Above: A map showing each region Google Fiber would like to expand service to. Dots around the orange pins are nearby cities.

Google Fiber’s gigabit connection offers consumers download and upload speeds that are 100 times faster than the average consumer broadband Internet service, and oftentimes at a much cheaper price than many of the main competitors. The service initially launched in Kansas City and has since expanded into Provo, Utah and Austin, Texas. In each of these cases, Google worked with city officials on incentive packages that would allow the company to easily set up shop.

Note that I said Google Fiber is only “considering” these regions for expansion. So you’ll want to temper your excitement to avoid being overly disappointed if it never happens.

“We aim to provide updates by the end of the year about which cities will be getting Google Fiber,” Google VP of access services Milo Medin wrote in a blog post announcing the expansion plans. “Between now and then, we’ll work closely with each city’s leaders on a joint planning process that will not only map out a Google Fiber network in detail but also assess what unique local challenges we might face.”

That means Google really isn’t interested (at this point) in dealing with cities that don’t see value in bending over backwards to make launching the Google Fiber network as easy as possible. And I don’t blame the company, as Google’s ISP business is still very much in its infancy.

Google Fiber’s infrastructure strategy focuses on launching “fiberhoods,” or a large group of people who agree to sign up for the service prior to construction starting. (If not enough people around you want Google Fiber, sorry, you get shafted.) Community venues like public libraries and elementary schools also gain free access to the ultra fast Internet network. The process is a more cost-effective way to launch a high-speed Internet service and one that immediately benefits each community it comes to.

The timing of Google’s announcement is certainly interesting. Just last week the country’s two largest ISPs — Comcast and the slightly smaller Time Warner Cable — signed a merger deal worth $45.2 billion. During the various media events about the merger, executives from both ISPs referenced Google Fiber as a competitor. With only three major markets (only two of them operational) offering Google Fiber, that is more than a bit ridiculous. Still, it may show that these executives fear Google’s aggressive public expansion plans.

At the same time, Google’s Fiber expansion announcement might just be the company smartly taking advantage of public opinion. Many people view Comcast and TWC as monopolies (let alone a mega-ISP made up of both) that don’t foster real competition or choice. I’m sure Google wants to reaffirm its own image as the first major threat to those mega ISPs.