Google has unveiled some new Google Pay tools and features, including support for both event tickets and boarding passes. Until now, Google Pay had only worked with loyalty cards and offers, though it did announce it was starting support for prepaid transit tickets a couple of months back beginning in Las Vegas and Portland. The announcements were made at Google’s annual I/O developer conference in Mountain View, California.

Google announced in January that it was combining Android Pay and Google Wallet under the new Google Pay brand, with the big global rollout kicking off in February. Last week, Google Pay was expanded to other browsers and to iOS. Speaking of iOS, Apple’s mobile users can now use Google Pay to send and request money, manage payment info linked to their Google accounts, and view their transaction history.

In the buildup to today’s event, news that Google was readying some notable updates to the Google Pay platform began trickling out. For example, Southwest Airlines added the ability to add boarding passes to the Google Pay app on Android. Now we know that companies from across multiple industries — including travel, hospitality, and entertainment — will be able to offer mobile wallet ticketing on Android devices. Initial partners for this include Singapore Airlines, Southwest, Eventbrite, and FortressGB, a company that provides ticketing infrastructure to soccer leagues in the U.K. and elsewhere. Moving forward, companies that integrate with Google Pay’s API — such as Ticketmaster — can enable their customers to save tickets directly to their phone by hitting the “Save to phone” button after the checkout. And the customer can open the Google Pay app, where they will now see various sections covering “Payment Methods,” “Tickets & Passes,” and “Rewards, Gift Cards, & Offers.” 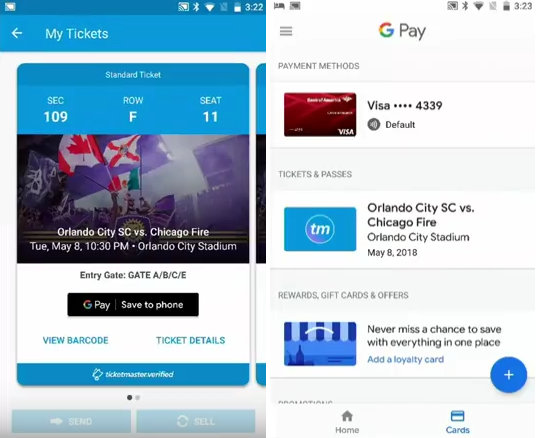 Above: Save to phone & Google Pay wallet

This will also reduce friction for fans entering venues. Instead of having to open the Google Pay app or scan QR codes, fans will be able to simply hold their phone up to an NFC reader at the check-in to gain admission.

These tickets also promise significant advantages over traditional paper tickets or e-tickets, insofar as they support real-time updates, so your flight departure time, for example, will always be accurate, even if it has to be adjusted for delays.

According to another of Google Pay’s new partners, Urban Airship, Google Pay will also enable a messaging feature that will allow companies to contact ticket holders through the app and via lockscreen notifications.

In related news, Google shared that peer-to-peer payments are being added to the main Google Pay app, although only in the U.S. and the U.K. Payment and peer-to-peer transaction history will also be consolidated in one place. Lastly, Google Pay online payments support has finally been expanded beyond Chrome for Android to include all browsers.