Update 9:05 a.m. PT: Google has informed VentureBeat that the issue experienced by Firefox users on Android is a bug, and a fix will be issued “very soon.”

Less than three months after Mozilla announced it was dropping Google in favor of Yahoo as the default search engine on Firefox, Google Play is now apparently no longer supported on Firefox for Android.

Visitors to Google Play on Mozilla’s mobile browser were greeted with a “this browser is no longer supported” message today, leading some to speculate that this is a deliberate action designed to inconvenience Mozilla. 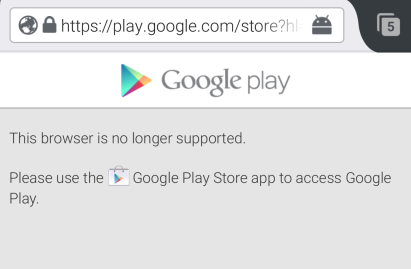 Above: Google Play on Firefox for Android

If this is a permanent, deliberate move by Google, then the direct ramifications of this single action might not be huge — after all, it’s safe to assume that most people will likely access Google’s store via the native Google Play app on Android. But it will signify something greater, and would illustrate the sway that Google holds if it can simply block access to its services on a whim.

Google had been the default search engine on Firefox since a deal was signed with Mozilla back in 2004. This agreement came up for renewal last year, but Mozilla took it as “an opportunity to review our competitive strategy and explore our options,” explained Mozilla CEO Chris Beard. Thus, a five-year deal was inked with Yahoo.

While Yahoo Search still languishes far behind Google in terms of market share, it did make some gains on Google in January, with the latter falling below 75 percent market share in the U.S. for the first time in five years.

How did Google respond? By providing an idiot-proof guide showing Firefox users how to ditch Yahoo for Google.

It is worth noting here that Google Play still works absolutely fine on the Firefox desktop app, while all other Google services work fine on Firefox for Android. We’ve also tested Google Play in multiple other browsers on Android, each of which worked fine — so this issue is restricted specifically to Google Play on the Firefox Android app.

We’ve reached out to both Google and Mozilla, and will update here once we hear back.