At its Google Cloud Next conference in San Francisco today, Google is announcing several updates to Google Drive, its cloud-based file syncing and sharing service.

For one thing, Google is introducing a feature called Drive File Stream that will make your entire Drive show up on your Mac or Windows PC but not put it all on your computer’s hard drive, if you’re an end user in an organization that pays for the G Suite portfolio of cloud services. Drive File Stream is sort of like what Dropbox’s Smart Sync feature for Dropbox Business customers, but Google’s system is different in that it’s effectively an “intelligent cache,” Prabhakar Raghavan, vice president of apps in the Google Cloud organization, told VentureBeat in an interview.

“You don’t have to select [folders to sync], that’s the point of it,” Raghavan said. Still, it will be possible for users to explicitly choose which files and folders they would like to sync. Google is launching the feature in an early-adopter program (EAP) before making it available to everyone.

Google does already let you choose which folders to sync when you set up the Drive desktop sync client. But going forward, Drive File Stream will be the “preferred way to access content” for G Suite customers, although end users will still be able to use the desktop client, a Google spokesperson told VentureBeat in an email.

Also today, Google is expanding the availability of Quick Access, a feature that shows you the documents that Google thinks you’re looking for right when you open the app. Quick Access arrived on Android in September. Now it’s coming to iOS and the web. Rather than providing a carousel that you can scroll through horizontally on the web, Google will just surface three files for you to tap and jump into.

Additionally, Google is revealing its acquisition of AppBridge, a startup founded in 2014 and based in the Canadian city of Vancouver. AppBridge provides software for migrating data into the cloud, specifically Google’s cloud, and as such has been a partner of Google’s. Its software is particularly good for mapping folders and hierarchies into Drive, Raghavan said.

And Google is moving a couple of Drive-related services into general availability: Team Drives and Google Vault for Drive. Team Drives are “shared folders done right,” to use Raghavan’s words; they provide the same files to everyone who has permission to access the folder, and sharing settings are in line with the folder’s permissions. Box, Dropbox, and Microsoft OneDrive already offer team folders. Google had it, too, but the implementation has been changed. Google Vault, for e-discovery and archiving, is going beyond Gmail and now lets admins search for information that end users stored in Drive. 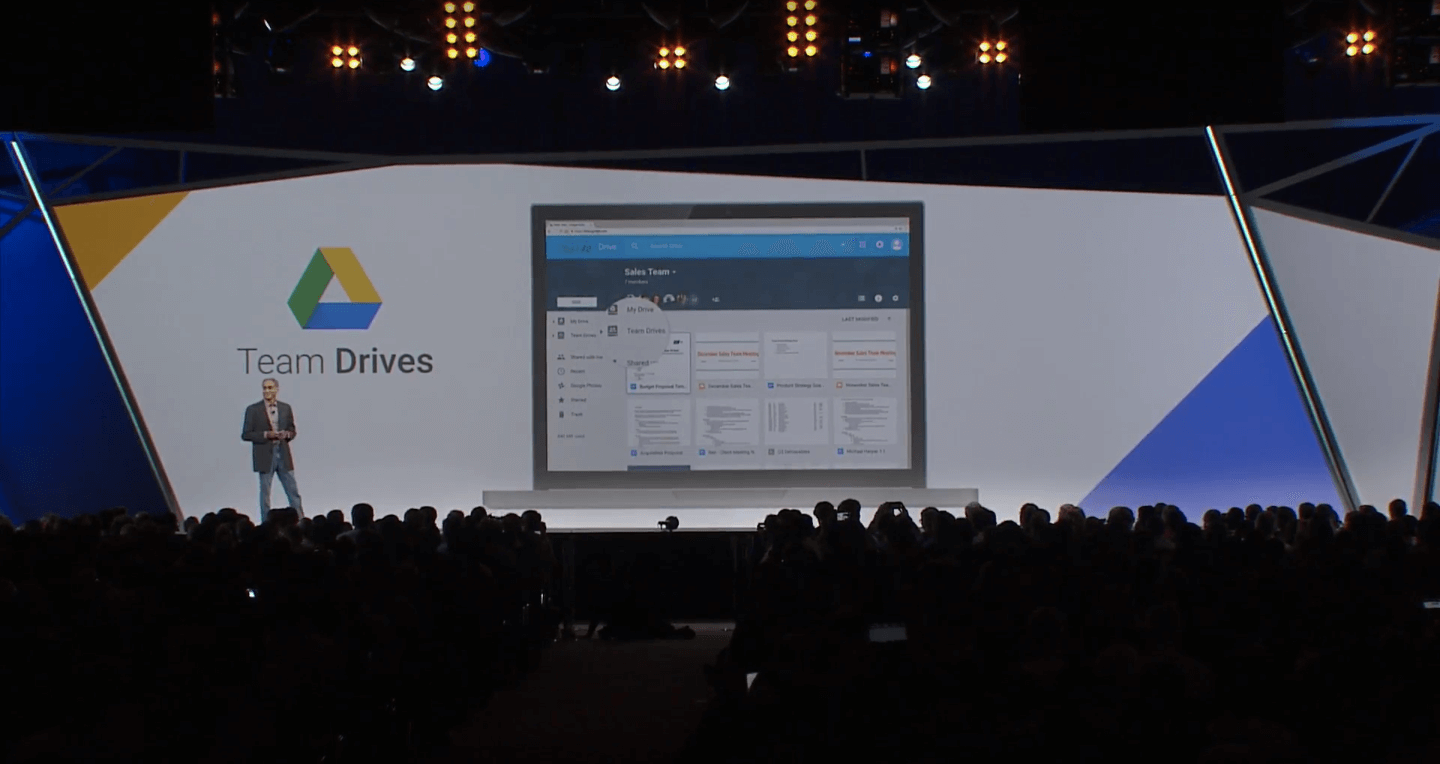 Google is also expanding its concept of add-ons for Docs and Sheets by launching an add-on framework for Gmail. Google’s third-party software-as-a-service (SaaS) partners have said that they don’t want users to lose context if they’re in Gmail and they need to hop to another place to get something done and then jump back to Gmail, Raghavan said — so Google is enhancing Gmail with add-ons to cut down on that. But also, Outlook offers first-party and third-party add-ins, and now Google is catching up.

If you write a Gmail add-on, it will work on Gmail’s web interface, as well as Gmail for Android and iOS. Google is looking to distinguish its add-on offering by only making add-ons pop up when it makes sense given the contents of emails. Google is leaning on basic regular expressions initially. “But over time we are bringing in natural-language processing (NLP) to say, this is kind of add-on this email is going to trigger. Even if it’s not structured … we’ll pull out the natural-language meaning,” Raghavan said.

Intuit, Prosperworks, and Salesforce are building Gmail add-ons, and third parties can sign up for the Gmail add-on developer preview before add-ons become available in the G Suite Marketplace later this year, Raghavan wrote in a blog post.

Also today, Google is announcing that it will begin taking orders for its Jamboard digital whiteboard in May. Jamboard, which integrates with G Suite services and competes with Microsoft’s Office 365-connected Surface Hub, will cost $4,999. Additionally organizations will need to pay a $600 service fee each year.