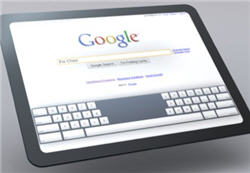 VentureBeat alumnus MG Siegler has posted mockup screenshots and video of a prototype Google tablet running the company’s Chrome OS operating system. Chrome OS basically boots Linux and then launches Google’s Chrome browser. The user does everything within the browser.

Google’s tablet may look like an iPad, but the browser-only operation is a big difference from Apple’s onboard applications and downloadable apps. Will Google’s’ tablet support Android apps? Quite probably not, because Chrome OS is not based on the same operating system source code as Android.

In the video below, a pair of cartoon hands operates a touchscreen the size of a desktop display, not a 9.7″ portable tablet.

With Google tablets surely on the way, JooJoo pledging to ship this month, and Apple now rumored — what, did you think we were done with the Apple rumors? — to be developing a bigger tablet that runs Mac OS X rather than the iPhone operating system, it seems touchscreen devices are finally becoming a mainstream product. I generally avoid predictions, but I’ll offer my take on tablets: Like flat-panel monitors, they’ll be seen as exotic items for a couple of years. But at some point in the future, we’ll look around and realize they’re everywhere.