Google today unveiled Android Wear 2.0, which the company is calling “the most significant update to Android Wear” since the platform launched over two years ago. Since the reveal is being made at Google I/O 2016, the company’s developer event, it’s fitting that Google is not just showing what’s coming, but actually releasing the first Android Wear 2.0 Developer Preview.

The preview is available for the LG Watch Urbane 2nd Edition LTE, the Huawei Watch, and of course the official Android emulator. Android Wear product manager Jeff Chang promised there would be multiple previews over the summer, with the final release to users slated for the fall.

Android Wear 2.0 brings a slew of improvements for both developers and users. David Singleton, VP of Android Engineering, said this release focuses on three goals:

I’m no fan of infographics, but this one Google created does a good job summarizing everything that’s new: 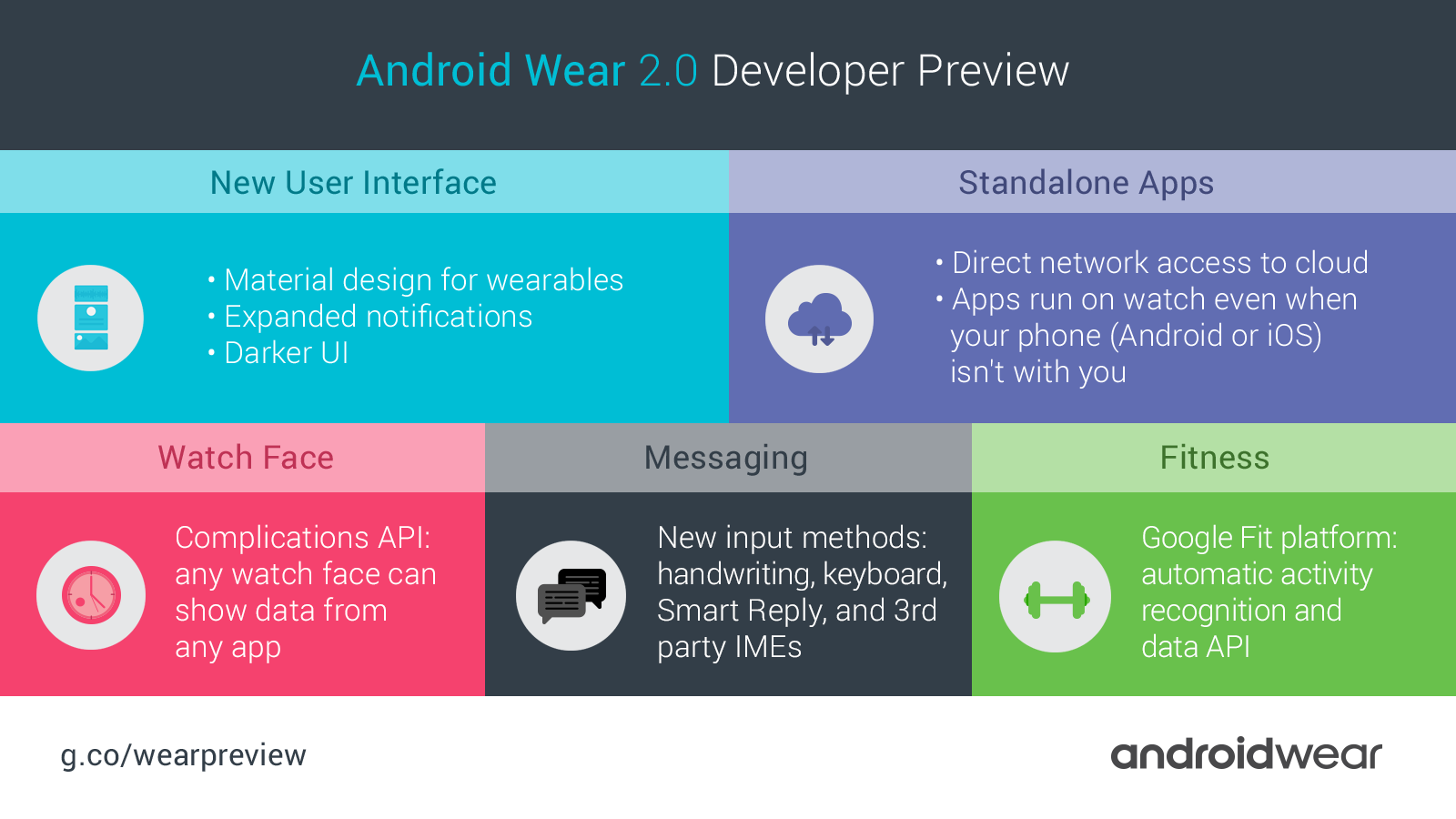 That’s the short version. Read on for the full rundown.

The first thing you’ll notice is a number of user interface changes — the team has “taken a pass through the entire system UI,” Chang explained. Overall, the user interface has adopted a dark color palette. The goal is to make Android Wear easier on the eyes when in dark rooms, and also to conserve battery life on OLED screens. The app launcher has been tweaked: Apps now wrap around in an arc across the side of round screens (Chang told VentureBeat the design for square watches has not yet been finalized). Quick settings is now available on a single screen, whereas before you had to swipe through each option on every screen. There is even a new watch face picker that makes it faster to switch between watch faces.

Google is also offering developers a new Material Design for Wearables guide. It covers the new navigation drawer (swipe down in an app) and action drawer (swipe up in an app) components in the Wearable support library and guidance on adopting the new dark color palette.

Android Wear apps will now finally be able to access the Internet directly over Bluetooth, Wi-Fi, or cellular. Yes, that means they don’t need to rely on the Data Layer APIs, meaning they no longer require your phone. 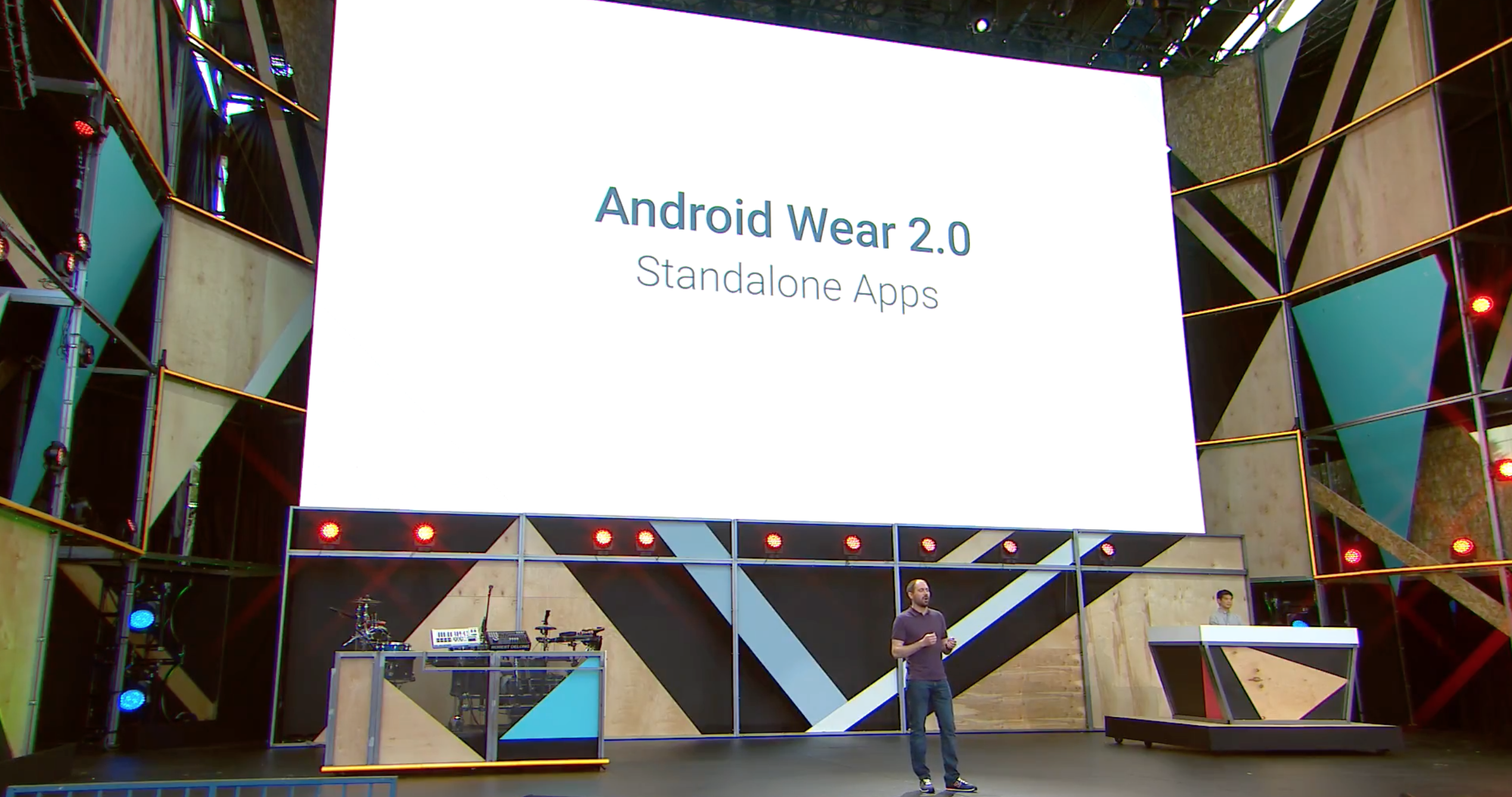 If this sounds familiar, you’re probably remembering the Android Wear update in April 2015 that let you get notifications, send messages, and use apps as long as your smartwatch was online. You could thus leave your smartphone at home, but it had to be online (data or Wi-Fi connection).

Although it’s not available in this developer preview, Chang told me Android Wear 2.0 will also extend this decoupling to app distribution. That’s right: You will be able to download apps directly from the cloud onto your Android Wear smartwatch, no phone required.

Complications are tidbits of information displayed directly on the watch face. Until now, there was no API (Android Wear users really wanted Google to launch a Complications API), so you couldn’t simply grab any complication and put it on any watch face. Want to see the weather, stock price, and the time? You only have so many watch faces to choose from.

Going forward, Android Wear will have a system-wide framework for letting apps show data on any watch face that implements the Complications API. App developers can choose to publish their data to a wide variety of watch faces, letting users launch their app directly from the watch face, and watch face developers can render the exposed data from Wear apps.

This has the potential to change how Android Wear users customize their watches. We asked Google how developers will be able to inform users of the new functionality.

In addition to speech, Android Wear is getting three new input methods: handwriting (trace letters on the screen), keyboard (this really should have been there from the start), and Smart Reply (this is straight from Inbox by Gmail). Interestingly, all three use Google’s machine learning capabilities to some extent: Handwriting to recognize the shapes you draw, Keyboard for suggestions as you type (English only for now), and Smart Reply to detect context. 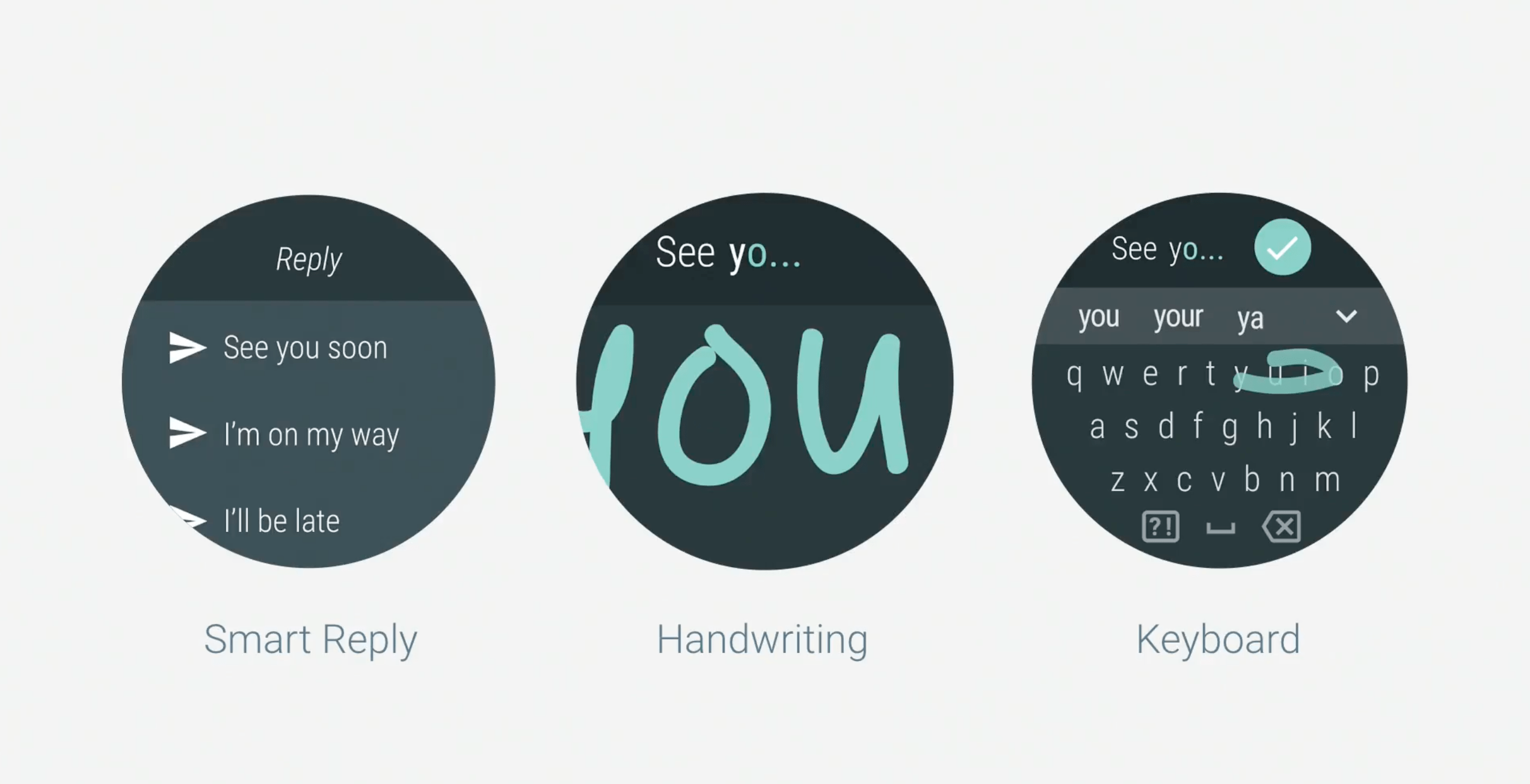 Developers can use these input methods in their apps via RemoteInput and EditText. Best of all, notifications that already use RemoteInput for voice replies will automatically support the new input methods.

Best of all, Google has ported over the full Android input method framework to Wear. As a result, developers can now even create their own custom input methods.

Last but not least, messages have a new notification template, which is also available on phones and tablets using Android N. The template’s layout is supposedly optimized for quick and responsive messaging, as Google has found that this is the app type that is used the most on watches.

It’s now easier to develop apps that use fitness data and detect activity. More specifically, the former means you can now register a PendingIntent to be notified of changes in the fitness data store (no more querying for updates), and the latter means you can get a consistent daily step count with HistoryApi.readDailyTotal() because a step-recording subscription is no longer required. But the most interesting part by far is the Activity Recognition API, which will let apps detect (with the user’s consent) when the user starts walking, running, or biking. The user doesn’t have to take any action: The smartwatch will simply switch to the default fitness app “within a few seconds” (Google Fit, what your watch ships with, or whichever you choose), Singleton said. On stage, he showed off the Strava app for cycling and running do just that.

Unfortunately, Google Fit’s API hasn’t gotten an update for those who frequent the gym. Namely, it still counts the number of reps you perform, but doesn’t distinguish sets of reps — a Google spokesperson promised the team is looking into it.

The new Android N developer preview also launched today at I/O 2016, and you can read about features that arrived in the first two previews here and here.

Singleton expects “the vast majority” of Android Wear watches will eventually get Android Wear 2.0. We’re not getting an exact list anytime soon (“it’s too early to make the commitment”), but given that so far Android Wear upgrades have been made available for every device in the ecosystem, it’s fair if a major release has to leave some “old” watches behind.