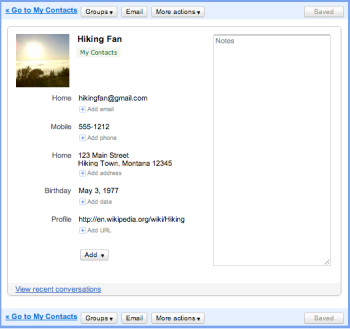 After ignoring the Contacts portion of Gmail seemingly since its launch, Google announced today that it has finally revamped its Contacts experience.

According to Gmail product manager Benjamin Grol, an improved Contacts interface has been the number one requested feature from user feedback. We are not surprised.

While the core Gmail experience has been improved significantly since its 2004 launch, the Contacts interface has remained clunky and confusing for some time. Gmail’s front-end was rewritten in 2007, and its Contacts saw some speed improvements from that upgrade. But in terms of usability, it lagged far behind Google’s other services.

Now Contacts are “more like the rest of Gmail”, writes Grol. New features include:

Google also increased the focus on Contacts and Tasks by adding links to them on the top-left corner of Gmail’s interface (see screenshot). Hopefully, now that Gmail’s Contacts have been improved, we will see similar improvements to its Tasks component. For one thing, I’d love to see it as an option for Google Sync — which lets you sync Gmail, Google Calendar, and Gmail Contacts with a variety of phones.