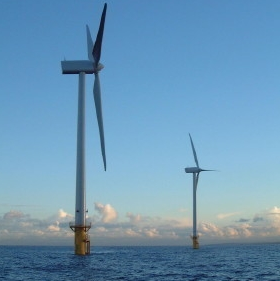 Just as the American Southwest is striving to become the epicenter of the country’s solar market, the Midwest is poised to lead in wind power. But both regions are facing the same, somewhat ironic hurdle: environmental groups who say renewable energy developments are anything but green. Efforts to install turbines in the Great Lakes have  literally run into a wall of opposition.

Earlier this month, formidable solar thermal plant builder BrightSource Energy had to scale back plans for a major array in Southern California due to an endangered species of desert turtle. Golden state Senator Dianne Feinstein has even pitched legislation to turn massive tracts of the Mojave Desert into protected monuments. It turns out that Great Lakes residents and eco-friendly organizations are just as unenthusiastic about turbines being built close by.

The U.S. Department of Energy has determined that the Great Lakes region is incredibly well suited for wind-power generation, especially off-shore installations. As such, companies in surrounding states and Canada have rushed to draw up plans for water-based wind farms. Ohio and Michigan, in particular, are keen about ramping up wind manufacturing to combat high unemployment rates. The latter could pump out as much as 16,650 megawatts — making it easily the biggest generator of wind power west of the Mississippi — and potentially giving the state something to replace its dying automotive industry.

Most of the blueprints, including those being acted on in Ontario, Canada, call for hundreds of turbines to be installed about two or three miles offshore. One of the arguments in favor of pushing them forward is that they are so far off the coast that they’ll barely be visible to houses lining the lakes. Property owners and tourist (especially boating) businesses don’t agree — pointing out the noise that wind turbines could create in their neighborhoods. They say that turbines will need to be more than six  miles offshore to truly be hidden from eyes and ears. And environmentalists have mounted a compelling case that turbines kill droves of birds and bats every year, and negatively impact fish.

So far, policy has been the only solution proposed. The Michigan Senate is currently reviewing legislation that would allow construction of the turbines, but it would require extensive and time-consuming permitting and site selection processes. This could delay the projects for years. Another bill in the state’s House of Representatives would require all wind farm to undergo a review process and receive public comment before progressing. This would take even more time. Both pieces of legislation are sponsored by Republicans.

In the meantime, developers like Scandia Wind and Havgul Clean Energy are adjusting their designs to meet the oppositions’ demands in an effort to circumvent regulatory changes. Originally, the companies planned to build 100 to 200 turbines in 100 square miles of Michigan-owned water , that came as close as 1.4 miles of the shore. They are delivering new plans, cutting the farm back to 50 square miles — with all turbines at least 4 miles away from the coast — to the governments in Mason and Oceana counties today.

Opposition to the turbines is so aggressive, that its even sparked rare American-Canadian controversy. Ontario recently lifted its ban on offshore wind projects, making way for a 700-turbine initiative in Lakes St. Claire and Eerie to finally move forward. Residents in elite Michigan neighborhoods like Grosse Point, Rockwood and Gibraltar, are outraged about what this could do to housing prices.

Their concerns are buoyed by upset environmentalists arguing that the development in question would be smack in the middle of migratory pathways for birds. SouthPoint Wind, the Canadian company behind the 700-turbine project, has been hit hard, but doesn’t seem to be deterred. Look for this conflict to become even more heated as construction nears.