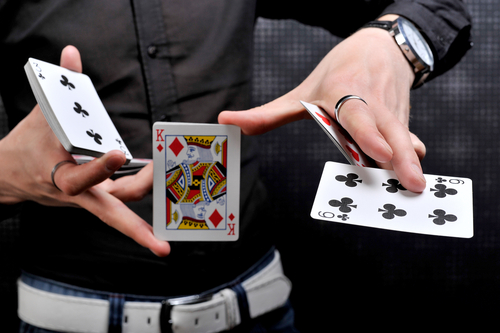 I have long criticized Groupon’s accounting practices. As someone who has watched the company closely since the it first filed the paperwork to go public (now scheduled for November 4), I have seen how it has continually adjusted its S-1, often in response to withering criticism.

Analyzing Groupon has been like playing 3-card monte. I’ve managed to successfully follow the queen and track the changes in the company’s accounting. Until now. I’ve lost the queen.

Groupon started off its reporting by claiming that marketing expenses don’t matter and that investors shouldn’t worry about them. It invented a new metric called Adjusted Consolidated Segment Operating Income. If you ignored Groupon’s marketing expenses, Groupon generated a profit of $81.6 million in the first quarter. That metric was so ridiculed that Groupon removed it in the second amendment to its S-1. When that was converted to a more normal accounting metric, Groupon actually lost $98.3 million in the quarter.

Groupon also initially reported its revenue on a gross basis, meaning that it included in its revenue the portion of a Groupon’s value that is shared with merchants. This was clearly in conflict with FASB regulations. So Groupon also abandoned that metric with the third amendment to its S-1. That change dropped Groupon’s 1Q revenue by more than half from $644.7 million to $295.5 million.

But the company’s most recent change in its accounting practices is especially troubling. Released just two weeks before its IPO, Groupon significantly changed the definition of key expense metrics such as marketing expenses, cost of revenue and selling, general and administrative (SG&A) costs. When it made these changes, Groupon did not restate the numbers for the preceding two quarters. We are just supposed to trust that Groupon is now near breakeven, right before the IPO.

At least with ACSOI and gross accounting, all of the correct information was in the S-1. Savvy investors and analysts could ignore the numbers that Groupon wanted investors to focus on and look at the right numbers. With the most recent changes, investors have no way of reasonably comparing its expenses in 3Q with expenses in 2Q and 1Q.

Groupon continues to try to get investors to focus on year-over-year numbers, but those numbers are utterly irrelevant when the company has grown as fast as it has. The quarterly numbers are the only ones that are relevant and Groupon does not provide those.

One of my long-standing concerns about Groupon is the extent to which the “Groupon Promise” represents a risk to investors. Under the promise, Groupon customers who are unable to redeem a Groupon or are unsatisfied with their experience can get their money back. Based on the third amendment, it was possible to estimate the percentage of Groupon’s revenue that went to refunds. I pointed out that on a percentage basis, Groupon’s cost of revenue increased more than 40 percent, from 6.8 percent of revenues in the first half of 2010 to 9.6 percent in the first half of 2011.

Sources with knowledge of Groupon’s internal numbers have told me that refund rates are increasing in line with that estimate. I specifically asked Groupon for clarity on this number. Groupon did not respond to that request.

I also gave Groupon the opportunity to comment on its accounting practices for this post. Spokeswoman Julie Mossler responded, “Rocky, we’re choosing not to work with you.” (The company is also currently in its SEC-mandated quiet period surrounding the IPO and often does not respond to media requests for legal reasons.)

After my request, Groupon again redefined the cost-of-revenue metric, including in it many other expenses that would make it hard to evaluate the impact of the Groupon Promise on the company.

Since the beginning, Groupon has not reported key metrics that are essential for investors to assess the health of its business. This includes email open rates (which are likely declining rapidly), churn among customers (likely increasing) and subscriber/customer acquisition costs. (In fairness, the latter number can be approximated using Groupon’s marketing expenses.)

One key number that was in previous S-1s was removed as it got worse: the percentage of each deal that Groupon gets to keep. This number dropped from 42% in 2Q to 37% in 3Q. Over time, I expect this number to drop to 15%-20%.

In other cases, Groupon reports numbers in ways that are very confusing to casual observers. I saw several news outlets report that 30 million consumers purchased Groupons in 3Q. That’s incorrect. Groupon only reports cumulative numbers of Groupon purchasers. Because it’s a cumulative number, by definition, that number can never go down. But it’s reported in the quarterly column. By my estimates, only about 17.6 million people purchased Groupons in 3Q.

Groupon is like the consistently failing student who suddenly gets barely enough questions right on the final exam to get a passing grade, without showing any of his work. By not offering restated numbers for 1Q and 2Q, Groupon is not showing its work.

But these factors are important to keep in mind:

The irony is that if Groupon hadn’t tried to push through its unusual accounting measures, it might have gone public sooner and at a higher valuation.