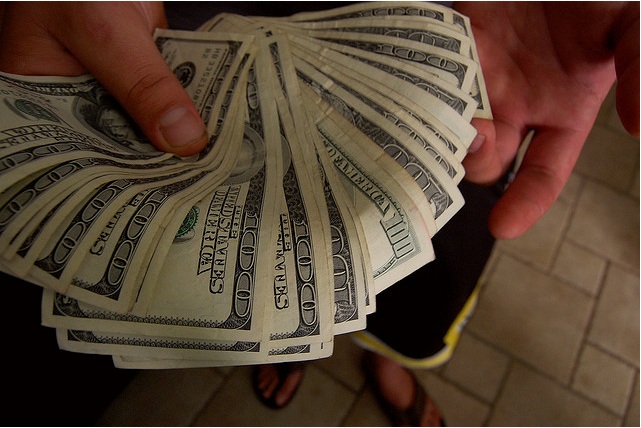 Groupon is changing its payment terms with merchants, according to several sources familiar with Groupon’s business and contracts.

The company has traditionally used two different payment models. In the United States and Canada, merchants have been paid in three installments: 1/3 five days after a deal closes, 1/3 30 days after, and the balance 60 days later. In the rest of the world, merchants are paid when vouchers are redeemed. (There have been some variations, but this has been the standard model.)

The upfront cash, while an important selling point for some businesses, has been a significant business risk for Groupon, as seen by the company’s earnings restatement due to higher-than-anticipated refund costs.

Groupon seems to be working to address that. According to a contract I received from a Groupon merchant, the payment terms on the most recent deal the merchant ran changed to 25%, 25%, and 50% (click on image below to view). An earlier deal had the 1/3 terms. The new contract also includes a refund reserve that Groupon can use to cover refund losses. 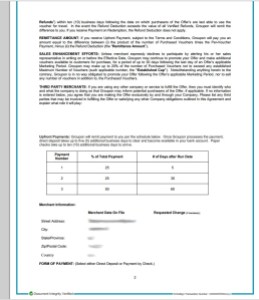 According to a former Groupon salesperson, reps had the ability to adjust payment terms to 90% right away and 10% after 60 days. Earlier this year, those payment terms were banned for all “service” deals, such as house cleaning and car washes.

Asked for comment, Groupon spokesman Paul Taaffe responded, “Most payment terms are as they have always been.”

What do these changes mean?

They could mean that Groupon is finally waking up to the risks inherent in its model. As I’ve been saying for nearly a year, Groupon’s U.S. and Canadian business closely resembles a receivables factoring business. Except that companies that knowingly do receivables factoring know they are in a risk management business and do due diligence before writing large checks. Groupon has been writing big checks with little risk modeling.

By stretching out its payment terms, Groupon is reducing some of that risk, making Groupon campaigns less attractive to unstable businesses and scammers. Unfortunately for Groupon’s growth prospects, the least stable businesses have had the most reason to run Groupons.

Although this is a positive move for the company in the long term, I expect this will hurt the company’s U.S. and Canada revenue growth.

A less charitable interpretation would be that Groupon needs to hold onto money longer because it needs cash to keep paying the bills. As of the end of December, Groupon owed merchants more than $520 million. Because of its IPO proceeds, Groupon had more than enough money to pay all of its merchant liabilities.

But its business has always been dependent on continued growth. Groupon takes the cash that credit card companies give it for new deals and uses that cash to pay for ongoing expenses such as marketing and to pay merchants for old deals. As the cash cushion from the IPO dwindles, Groupon needs to hold onto money longer. (Given the stock’s recent performance, I expect that raising additional money from public markets would be quite challenging for Groupon.)

The fact that Groupon is able to change the terms and lengthen payment periods indicates that the company still has some leverage over merchants. But in some cases, the merchants are unaware this is happening. The merchant who forwarded me the contract didn’t notice until after the deal had run and the payments were smaller than expected.

Groupon can only go so far with payment terms: LivingSocial and Google Offers still offer terms that are much more generous. If Groupon tightens terms too much, it will lose out on running those deals.