Vivaldi has launched its new desktop browser today after months of beta testing, and it’s hoping to give users an alternative to market leaders, such as Google’s Chrome and Apple’s Safari.

Rather than slimming down the desktop browser, making it possible to add extensions, Vivaldi is trying to pack a huge number of features right into the software. At the same time, it’s trying to make it easy for mainstream users to discover and use more complex features.

I’ve been using Vivaldi for a few days now, and so far I’d say my initial impressions are positive, though of course with some caveats.

Download and setup are pretty easy. Vivaldi walks you through some layout choices, such as which edge you want the tabs to appear on (top, sides, bottom). My basic layout is in the photo at the top.

One of the tricks is to get used to the Vivaldi nomenclature. On the left side of my layout are buttons for “web panels.” These are sites you save and can access with one click. They open in a panel, in my case (in the photo above), it was Twitter.

This was pretty handy for keeping an eye on Twitter, even though it seemed to just pull the mobile browser version. That makes sense, since it’s just wide enough for one column. On the other hand, I have to manually reload it to get updates. I found myself wishing it would pull updates like TweetDeck.

On the right side of my layouts are the tabs. I really liked being able to see the big preview windows. Vivaldi is trying to acknowledge the fact that many people (including me) often open far too many tabs — to the point that they become unwieldy and invisible.

So I liked the visual tab bar, but I wish the previews windows didn’t shrink as I added more. I would rather they fell off the screen and I could just scroll down the column to find the ones I want.

Vivaldi also added something it calls “tab stack tiling.” This is where things start to get a bit more complicated. The idea is that you create a “stack” of between two and four tabs for websites that you can open simultaneously in the browser, creating a kind of multi-desktop feel. You probably want a pretty good-sized screen for a feature like this.

There are a lot reasons this could be useful, but it’s not as efficient as it could be. Figuring out how it works required hunting down this how-to feature page. Basically, on the Mac, you hold down the command key, click on four tabs, then click a little button at the bottom to choose the layout.

This gave me the following: 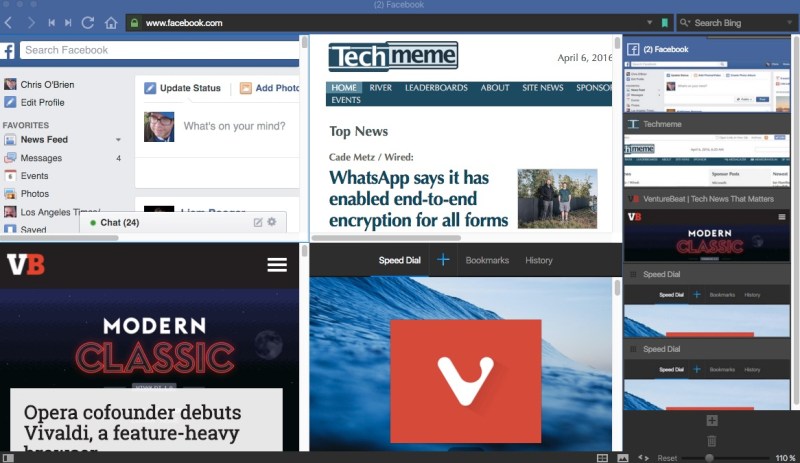 Okay, cool. So this could be useful for say, copying items from one website into a Google Doc as you write, rather than toggling back and forth across many tabs. But when you go to Google Drive to create a Doc, it opens the new file in a new tab. So to include the new Google Doc in the tile stack, I needed to go back and re-do the whole tile stack.

Now I know to create the Doc first, open it in a tab, then create the tile stack. But still, it’s a bit clunky.

Another feature that I liked, but that could still use some work, is “Notes.” On the left side, where the web panels are, the third button down opens a panel for Notes. Basically, you can highlight anything on webpage, right-click, and add it as a note. You can create folders for notes, and they automatically pick up the web address.

I use Evernote to do this a lot, as an extension on my Chrome browser. It’s nice having it built-in on Vivaldi. But Evernote also lets me save the whole page right into the Evernote app, and I found myself wishing Vivaldi gave me the same option. If there’s a way to do this, it wasn’t immediately obvious. 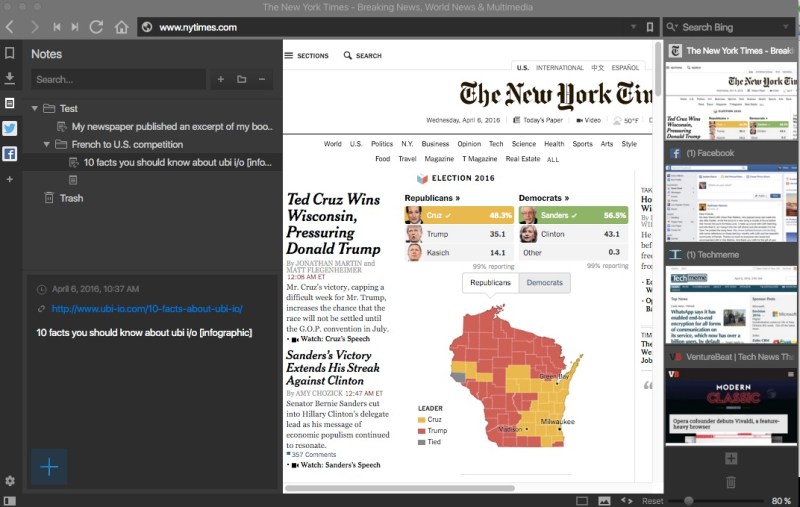 Speaking generally, I can certainly see Vivaldi attracting a core user base. There are other nice little touches, like the way the browser changes color schemes to match the basic colors of whatever website you have open.

That said, it’s hard to break habits. I’ve been using Chrome for a long time, having abandoned Mozilla’s Firefox several years back (like many other people). But if Vivaldi’s goal was to at least offer a very different browsing experience, I would say it has succeeded so far.