Heyzap announced a month ago that it was launching a widget that web sites could use to embed casual games on their sites. More than 3,000 web sites have installed the widget so far, with gamers playing about 5 million minutes a month with an average game session lasting 17 minutes. 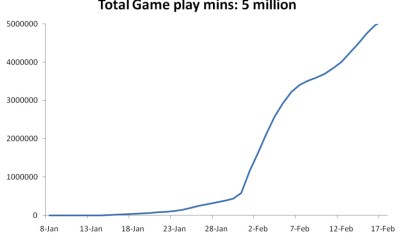 Today the company is launching a game  database that can be sorted into categories like sports or puzzles. By organizing the games, Heyzap says it’s something like a YouTube of Flash games. (Of course, Kongregate, which aggregates user-created games, already has that nickname). Publishers can easily select contextualized casual games content. For example, a political blog like huffingtonpost.com can now get an embed code for purely political games, or a basketball site like NBA.com could tune into basketball games.

Heyzap is also releasing an applications programming interface to let publishers create their own game portals and pull out specific games. Cooliris and Weebly are a couple of the partners. The publishers can use the API to access 6,000 Flash-based casual games.

It’s a good deal for developers, too, because it’s a way to distribute games to a far wider audience than they otherwise might reach. They can upload their games directly into the site. Heyzap takes a cut, the game developers or publishers get a cut, and so does Mochi Media, which embeds ads into the games.

Immad Akhund and Jude Gomila founded the San Francisco company. It has funding from Y Combinator. The company expects to look for money later. It will face some serious competition on the web from the likes of Wild Tangent, Oberon Media, Addicting Games, Games2Win, GameCurry, and the aforementioned Kongregate. NeoEdge does something similar with widgets, but NeoEdge focuses mainly on downloadable games.

Akhund previous founded Clickpass and sold that a few months ago to Synthasite.