With more than 35 million monthly active users around the world, Hi5 is one of the largest social networks behind social network leaders MySpace and Facebook. It never seems to get much attention in the tech press, for whatever reason, but that may change if the San Francisco company’s developer platform continues growing like it has been since it launched three weeks ago.

Last week I wrote that applications built by leading widget company RockYou were showing an early dominant performance on the site, but the larger story here is that the whole platform seems to be doing well. More than one million applications are being installed by users each day, with about half of the site’s active users engaging with installed apps on a daily basis; more than 300 apps are now live on the site; and more than 9,000 developers are building applications for Hi5.

Does Hi5 have a market-leading platform?

Platforms offered by MySpace, Orkut and other social networks have failed to yield growth and engagement for apps in the same way. Hi5 offers a more compelling platform, at least for now, for the following reasons. It has a large, international audience, a number of missing features that its letting outside developers fill in (like events calendars), and viral channels for growth.

Most of Hi5’s users are in non-English speaking countries, and around 75 percent don’t use any other social network, according to the company. So far, the most popular applications on the site tend to have elements of cultural expression. One popular application lets users display an image of their favorite soccer star on their profile page, Hi5 chief executive Ramu Yalamanchi tells me — this is a good fit with the site’s large Latin American, soccer-loving audience. Other popular applications let users include their country’s flag or other information on their profile page. 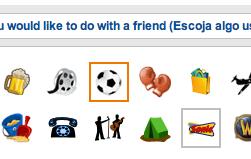 Hi5 itself has only offered fairly basic features to its users up until now. One of the most strikingly popular new apps on this front is called TheVerb, a basic events planning calendar developed by a student at Arizona State University. It’s had around 800,000 installs, maybe because it includes Spanish translations, maybe because it lets people invite each other to do certain activities by clicking on icons (like a soccer ball, to send to a friend you want to play soccer with) — and probably because Hi5 didn’t previously offer an events planning feature.

Hi5’s platform, as I mentioned last week, also includes ways for applications to let users invite friends to them or notify users of friends’ actions on them. MySpace, on the other hand, has held back on both of those particular viral channels — its notifications are coming at the end of this month, with invites coming sometime next month, according to one report.

Like competing social network platforms, the company goes out of its way to both regulate applications and work with developers. It screens all applications for technical quality and taste before releasing them on the site. It has an IRC channel where its engineers and product managers work with developers and answer questions. It has also benefited from being a member of the Open Social initiative, a consortium of social networks and other web sites that are trying to develop a standard so developers can build applications that run on any Open Social member platform. One developer, for example, was able to take an application built in rival social network Orkut, make it work in Hi5 in 60 minutes, then make it work in MySpace’s platform in 90 minutes.

Hi5 also includes a way for users to notify it of apps that are tricking users into sending invites to their friends, or other forms of app spam. If an app gets too many user complaints, Hi5 will work with it to address issues.

Hi5 is specifically trying to avoid ranking apps — it doesn’t display installs or daily active users, and instead shows only a randomized gallery of applications that you can only sort by category type. This way, it hopes to make developers feel like they have a shot at building a useful application, according to Hi5 product manager Anil Dharni. Facebook, on the other hand, launched its platform nearly a year ago with a gallery that shows you the number of installs that an application has gained. Developers focused on getting the most installs possible, so after a few months, Facebook changed the main metric to be “daily active users” — how many users somehow engage with an application per day. MySpace, which only made apps publicly available last month, still only shows total installs. 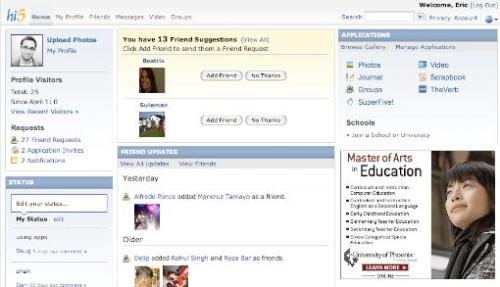 Will this platform give Hi5 an edge against encroaching competitors?

More generally, this platform is a strategic move by Hi5 to further differentiate itself from its competitors. Hi5 has made language customization a focus since it launched in 2003, aiming for emerging countries that were just starting to go online in significant numbers, which helps explain its international success. (Note: Commenters on my last piece on Hi5 accused the company of spamming users with email invites, in its early days.)

While Hi5 already offers sites customized for 23 languages, MySpace has been busy rolling out sites that are customized for specific countries, recently launching MySpace Latino. Meanwhile, Facebook has released its own translation application (done by users, that includes an increasingly diverse number of languages).

Anecdotally, I hear that some Hi5 users in Mexico, specifically at Mexican universities, are starting to use Facebook — this may indicate a wider switch to Facebook down the road, if these students prove to be trend-setters. However, Yalamanchi tells me that the company has seen zero impact from competing social networks in its core markets — Latin America, Portugal, random other countries. What’s more, he and Dharni tell me that Open Social developer events have been packed; one in Mexico had scarcely a mention of Facebook, he says.

While Hi5 is touting its commitment to the Open Social standard as a core strength, Open Social is still a work in progress. Sure, a simple app can be modified quickly between social networks, but typically an app needs to be the right fit with the user base if it is going to do well. As applications get more complex across social networks, one must assume that cross-network compatibility issues will only increase.

As one top Facebook app developer told me this weekend, the proprietary platform code that Facebook offers its app developers is simply better than Open Social. While Open Social has tried to modify HTML and Javascript to work across networks, Facebook’s code is optimized for Facebook. This means its applications can do things like make calls to Facebook’s servers much faster than Open Social apps can, leading to a more efficient ecosystem.

Yalamanchi says the answer is obviously yes: “There’s not one service that can be all things to all people. We’re well established in a lot of markets, our traffic numbers keep going up — we’re not seeing our competitors on the radar.”