Because Facebook is the largest, fastest-growing network in the world, a big question is what other social networks are going to do to compete. Hi5, with approximately 60 million monthly unique visitors, is in the process of making itself an “immersive social environment” that includes virtual goods, avatars, games, instant messaging and a 3-D world geared at older teens worldwide. The company plans to make money off of virtual goods — not traditional online advertising.

This means hi5 is pitting itself not so much against Facebook — that site’s fastest-growing user group is older than 30 — but against larger rival MySpace, as well as Friendster, Orkut and a range of local competitors. It’s targeting the “15 to 24 year old demographic,” chief executive Ramu Yalamanchi says, through a set of services designed to provide what he calls “social entertainment.” One service it plans to roll out later this month is web-based instant messaging, turning your hi5 friends into instant message contacts — similar to what Facebook and MySpace already offer. But that’s just the first step. It will also be introducing its own games and avatars for users later in the year (where technology from virtual world startup Pixverse, acquired last summer, is being applied). It plans to launch the 3-D world by the end of the year.

As it does so, hi5 may also come into competition with an assortment of established virtual world companies. Gaia Online and Habbo are popular with younger teens, while IMVU also targets older teens; Second Life, while targeting all ages, is typically popular with older users.

In other words, even though hi5 grew over the last several years through features that didn’t seem so different from many rivals — user profiles, messaging, activity feeds, status updates and third-party widgets — it will start to look a lot different. It reflects a larger move by major social networks to turn themselves into unique properties. Facebook has gone off in a different direction, reorganizing its entire site design around activity feeds last fall, a so-called “social utility” more popular with older types. 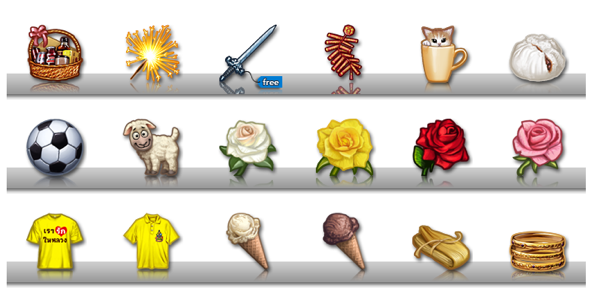 Virtual social entertainment is also where the money is, Yalamanchi says. He’s not aiming to make the company big money from banner advertising like MySpace or forms of “social advertising” like what Facebook is doing. He wants to make it on virtual goods, what Asian web portals like Chinese site Tencent have been doing successfully for years even though China’s ad market is still relatively small. Hi5 has already started going down this road through its virtual gifts feature, introduced last month. Users can send each other virtual objects like Chinese steamed pork buns, Mexican “Rosca” cakes (traditionally eaten on January 6 to celebrate Three Kings’ Day), and Jewish dreidel. Gifts are priced using hi5’s virtual currency, Coins, and based on local purchasing power and exchange rates. This allows people without a lot of disposable income to participate.

Other social networking companies are also applying the concept of virtual goods in the U.S. and around the world, but not to the same degree as hi5 plans to. Facebook already offers virtual gifts and MySpace plans to do so. Third-party developers have been making money on virtual goods within apps that run on these social networks for many months. It’ll be interesting to see how hi5 includes the third-party developers on its platform as it builds out its own features.

The virtual goods revenue model makes sense for hi5’s user base, which is big in a semi-random assortment of countries around the world. The company is perhaps best know for its popularity in Spanish-speaking Latin American countries like Mexico, Ecuador and Venezuela, but it also has millions of users in southern and eastern Europe and assorted other countries — and it’s experiencing new growth in Thailand, Malaysia, Singapore, Hong Kong and India. Which is where hi5 is facing some stiff international competition. Friendster is the leading social network in many of these Asian countries, and Google’s Orkut has historically led in India. 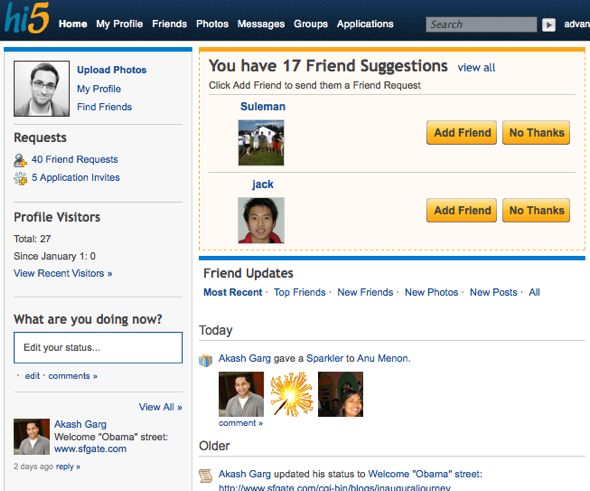 So right now the company is in full-court press against these rivals. The company has offered its site in languages like Spanish for years, which is one reason why it’s gotten popular abroad, but now it offers the site in nearly 50 languages around the world — including on its mobile site. The combination of languages and devices fits in with the rest of its product strategy. While the average U.S. user has — at least until the iPhone — preferred using social networks on computers, many users abroad have little or no regular computer access. Especially young people in emerging markets. The company says its user numbers in Latin America are undercounted by third-party traffic analysis firms like comScore that don’t have good access to mobile user data in the region; however, mobile browser Opera Mini stats show hi5 with a strong presence in the region.

MySpace continues to dominate in the U.S., where some 76 million of its 120 million users are located, according to comScore. Facebook has made itself into a more useful product for adults, which is valuable but not necessarily the sort of interactive, entertaining, self-expressive environment that younger people seem to prefer. Outside of the U.S., hi5 grew by around 30 million monthly unique visitors last year versus around 15 million for MySpace. Hi5 also grew both larger and faster than Friendster, Orkut and Bebo.

So perhaps hi5 can become the social network of choice for young people around the world.