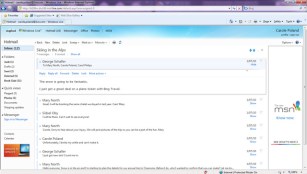 Microsoft presented a sneak peek to the press this morning of a massively overhauled Hotmail — Hotmail Wave 4 in Microsoft jargon — that will go into a public beta test this summer.

Hotmail Wave 4 adds several features that have until now been unique to Google’s Gmail, and in some cases pushes them further. Threaded conversations, an advanced search box for email, and massive cloud-based data storage for email and attachments seem deliberately designed to compete with Google’s leading features. Moreover, the user interface has few buttons or images. It relies mostly on clickable text links for controls. Very Google.

But Hotmail Wave 4 adds Bing-like inline viewing of multimedia links — Flickr, Hulu, YouTube, etc — in messages. It’s the most compelling reason yet to install Microsoft’s Silverlight technology, a competitor to Adobe Flash and the HTML5 open standard. If someone sends you a bunch of photo attachments, Hotmail automatically serves them as a photo album.

The cherry on top is the ability to edit Microsoft Office docs directly within email messages. You can reply to a message with an edited version of the original’s attachments, stored in the cloud and reachable by a secure link sent to your correspondents.

One more thing: Do you hate banner ads? You can remove them from Hotmail, as has been the case for a while, for $19.95 a year.

Hotmail is one of the Internet’s surprise success stories. In 1996, a startup funded by Draper Fisher Jurvetson built a browser-based email service and gave it away for free. Hotmail wasn’t the first such service, but its friendly user interface and high reliability made it an instant hit. In 1997, Microsoft bought the company for an estimated $400 million.

Today Hotmail claims nearly 400 million worldwide users. Globally it’s the most-used email service, but in America it’s second place to Yahoo and being closed in on by Gmail, a fast-growing No. 3 competitor since its late launch in 2004. Here’s a chart from comScore showing US traffic to the competing services over the past year (click to enlarge).

Microsoft’s presenters this morning talked about general email wants, such as “taking back your inbox.” Hotmail will automatically sort and process newsletters, shipping notices from Fedex and other shippers, and newsletters. You can tell Hotmail which newsletters to keep archiving, and which to delete without showing to you.

And Hotmail also makes it easier to share attachments, Office docs, and photos, even with non-Hotmail users.

But as shown in a side-by-side comparison chart prepared by Microsoft for a reviewer’s guide, it’s impossible not to notice the direct feature-for-feature positioning of Hotmail versus Gmail: 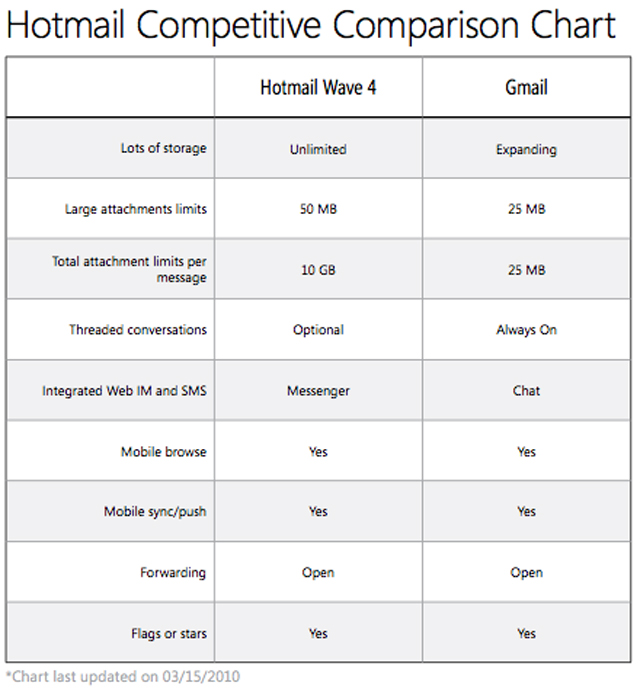