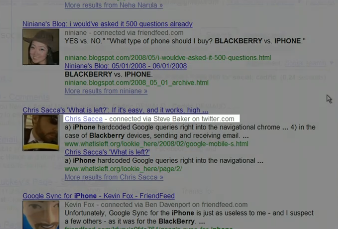 Google’s foray into the world of social search is now live.

As we wrote last week, Google social search pulls in results from your friends alongside conventional results. If you’re thinking about visiting Brazil, a traditional search might turn up hotels, tourism agencies and restaurants. But in social search, blog posts or tweets about the trip from friends might turn up at the bottom of the search results page. It pulls in contacts from Twitter, Friendfeed and Gmail.

But really, Google could have your Facebook network (or at least the public pieces of it) if it wanted to. Facebook’s public search listings randomly generate photos of eight random friends. Crawl it enough times and presto! You have a rough social graph. (Even a couple of academics from Cambridge University have done it.) Of course, it lacks the richness that Facebook’s social graph data can deliver, because Facebook knows whose profiles you look at frequently, whose posts you comment on and “like”, and whose photos you end up in. And it would be a rough approximation at best — because friends are randomly generated, even if you crawled a page a million times or more, there would always be an infinitesimal chance that a random number generator wouldn’t produce a particular friend’s profile.

Still, Google has some of that in Gmail if you’re a religious user. For those of us who do use Google’s e-mail service, the company could conceivably know our closest and deepest contacts because it knows who we write most often. (They don’t use the content of e-mail in social search but they do take into account the people we talk to in Google’s chat client.) By comparison, Facebook knows our weaker ties, as people have about 130 friends on average and use it for more constant and shallow contact. 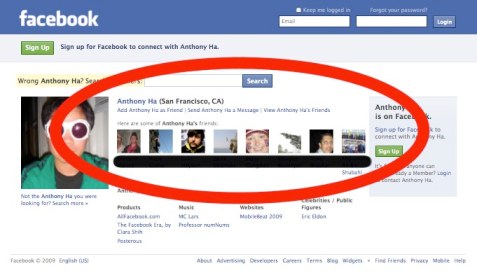 [Update: Officially Google says they don’t crawl Facebook public listings to generate a rough social graph and that they don’t include Facebook friends because they’re private.] But it wouldn’t be hard to do it if they wanted to.

On another note related to social search, Facebook’s deal with Microsoft to feed public status updates into Bing was non-exclusive. So the door is open to a Google-Facebook public update deal in the near future.

Now think about all of those pieces combined if that deal happens: Facebook’s public status updates and shares, Gmail, Twitter and FriendFeed contacts.

The old truism is that Google has never really done social well. Witness the decline of the search giant’s social network called Orkut, which lags Facebook and is defending its last bastion in Brazil.

Perhaps now’s the time to prove everyone wrong.