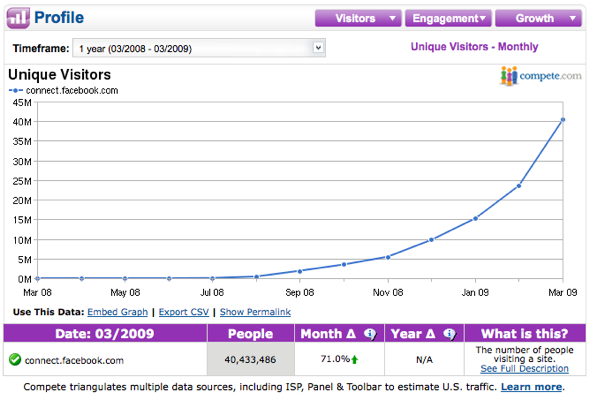 In the hard-to-measure world of online web traffic, here’s some especially peculiar numbers. Facebook had more than 91 million unique US visitors last month, according to analytics firm Compete. And around 40 million of them somehow accessed Facebook Connect, at connect.facebook.com. Connect is Facebook’s site that lets you share information back-and-forth across the web, so could this data mean Connect is taking off?

Perhaps, but it’s tough to tell from this information. Every time anyone loads a web page that includes functional Connect code — say, any article on gadget blog Gizmodo — connect.facebook.com itself has to be accessed (specifically, this Javascript library, for those who are interested). So Compete could be counting each page load as a visit to Connect, whether or not Connect itself is used once the page is loaded. In Gizmodo’s case, AllFacebook calculates that there were nearly 12,000 monthly active Connect users on the site in March, a fraction of the millions of unique visitors that Gizmodo gets every month.

Facebook hasn’t revealed its own measurement of Connect traffic; it has previously said that some 8,000 sites are using Connect already. Anecdotal evidence isn’t bad — a lot of people observably use Connect-enabled publishers’ sites to sign in and leave comments, including commenting on VentureBeat. So basically, even though many web publishers, services, and most recently iPhone application developers are beginning to use Connect, its overall success is unknown.

Also, Compete’s measurement of Connect sites could be inflating its count of Facebook’s overall number of monthly active users. Facebook’s home site received 73.4 million unique US visitors in March, according to the firm. The difference between that number and 91 million overall could also be coming from other domains, like apps.facebook.com where its third party applications are located. That subdomain brought in 39 million unique US visitors last month.

Facebook itself doesn’t release US traffic number, but the company did say it crossed the 200 million worldwide monthly active user mark late last week. It has also said more than 50 percent of users access the site every day. Compete’s data about US Facebook usage from March seems to bear this out. It had some 1.5 billion visits in March, which averages out to 16.8 visits per US user per month, as Inside Facebook notes

If anything, the issues around counting Connect traffic show that as Connect and other web-wide services — including Google’s Friend Connect and MySpaceID — begin become more popular with other sites, analytics firms will need to offer more sophisticated tools for measuring each service’s reach, and how it does or doesn’t relate to the home site’s traffic