Early on a Thursday morning last May, executives from Prague-based Avast crowded onto a podium in the London Stock Exchange to cheer the start of trading for the cybersecurity company’s stock. They were understandably thrilled to be part of a $4.5 billion IPO, a milestone that placed them firmly in one of capitalism’s most coveted clubs.

Yet Avast’s almost 30-year path to this point has been singular. The brainchild of a couple of Prague researchers working in a Soviet-era lab, Avast grew methodically and with little fanfare, surviving political and technological upheaval to become one of the most recognized names in endpoint cybersecurity for consumers and small businesses.

With the IPO behind it and cybersecurity a hotter market than ever, the pride of Eastern European entrepreneurs now seems poised for an explosive decade.

“Enterprise security gets a lot of attention, and people think that consumer products are primitive by comparison,” said Avast CEO Vince Steckler. “But what we have is an extremely sophisticated product based on machine learning and cloud infrastructure. It’s a major operation to protect millions of people around the world. And really, we’re still just getting started.” 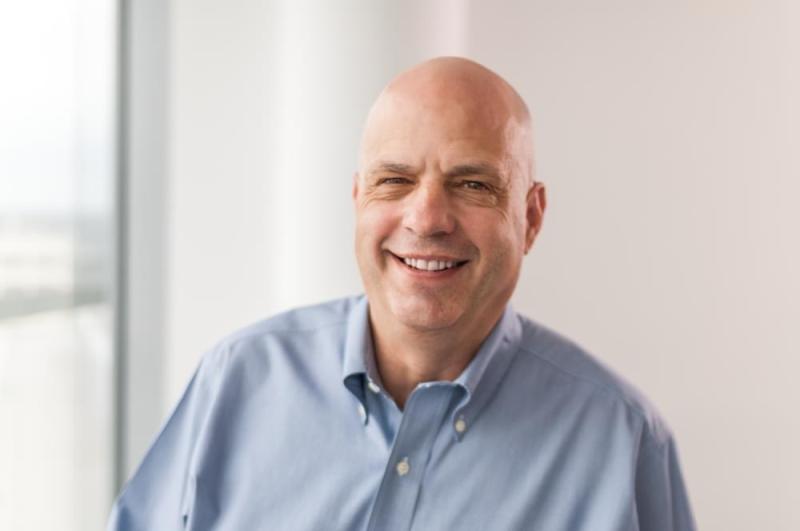 While Prague’s historic city center bursts with architectural and cultural sites that recall centuries of history, Avast’s gleaming headquarters a few kilometers to the south may be the region’s greatest monument to the changes experienced since the Czech Republic slipped out of the Soviet bloc.

The company built this HQ and moved into it in early 2016. In terms of physical form and ambiance, it could be dropped into the heart of Silicon Valley and it would fit right in. The building is 162,000 square feet, and Avast occupies seven floors. This includes 45 meeting rooms, a cafeteria that serves free food all day, indoor picnic tables where employees can eat together, a fitness area, a hammock room, pool tables, a golf simulator, a movie theater, a library, and a kid’s room.

With wide work spaces and staircases, the interior is designed to spark chance encounters, random conversations, and, hopefully, an energetic and innovative culture. 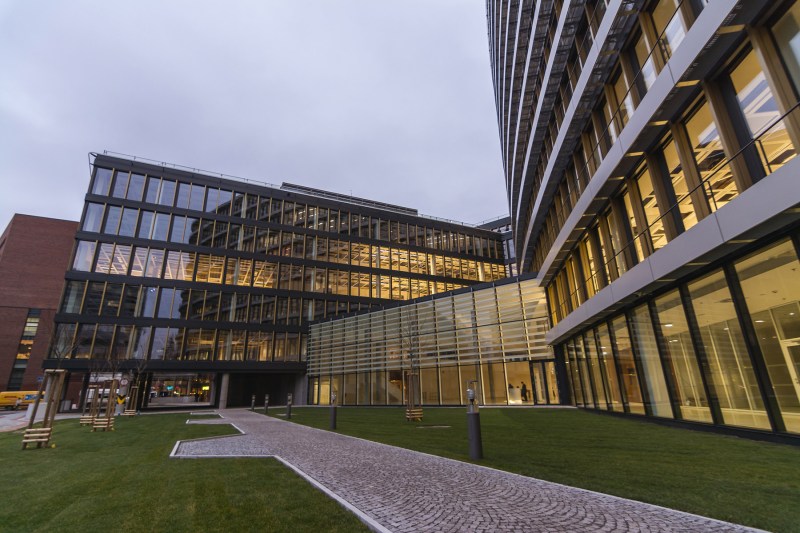 Above: Avast headquarters in Prague.

It could not be further from Avast’s humble beginnings, when Eduard Kučera and Pavel Baudiš founded it in 1988. The pair had met at the Research Institute for Mathematical Machines in Czechoslovakia. It was there that Baudiš was examining a floppy disk when he spotted a virus — and wrote a program to remove it.

That inspired him to ask Kučera to join him in creating a “cooperative” called Alwil to develop the software they named Avast. And had history not overtaken them, that might have been that.

But in November 1989, the Velvet Revolution swept the streets of Prague, toppling the government, lifting playwright and poet Vaclav Havel to the presidency, and leading to the exit of Soviet troops and influence.

Alwil became a joint partnership that produced an antivirus program for Windows 95, bringing it global sales and attention. But while Avast drew high marks for its technical quality, the business was troubled. With no money for marketing, it had to rely mostly on word of mouth to sell its software, which was loaded on disks.

The founders decided to try a new approach as they fended off buyout offers. In 2001, they switched to a freemium model. The basic antivirus software became free, and users could pay for certain premium features. The user base exploded, growing from 1 million in 2004 to 20 million in 2006. The business side was now stable, if not hugely profitable.

But acquisition offers continued to roll in, particularly after 2004, when the Czech Republic joined the European Union. Startups around the Prague area became tantalizing buyout targets for companies looking for not only products, but a way to tap into Eastern Europe’s technical talent pool.

Determined to remain independent, the cofounders made another big change. They hired Steckler, a former Symantec executive who had been in cybersecurity for over a decade, to take on the CEO role in 2009.

“I thought they had to really up their game,” Steckler said. “They had a great product, and it was a product that could stand by itself. But it was still not widely know, and there was not a clear path to monetization.” 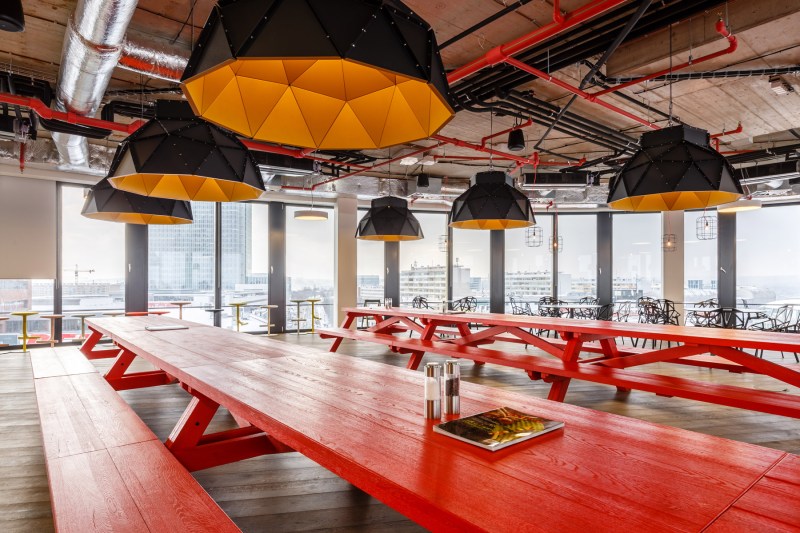 Steckler launched a number of changes to turbocharge the business. A year after he came aboard, the company was renamed Avast and raised $100 million in venture capital. He also pumped resources into sales, marketing, and public relations — which had a total of one employee when he first joined. Within four years, Avast had 200 million users and had grown to 350 employees.

By now, of course, the first wave of the internet bubble was long gone, and the world had moved from selling software on disks to downloads, thanks to the growing adoption of broadband. That gave Avast an even more efficient way to distribute its antivirus product for Mac and PC desktop computers. At the same time, consumer vulnerability was growing exponentially as the number of viruses and malware incidents soared.

But Steckler’s most dramatic move came in 2016, when Avast announced it would pay $1.3 billion to acquire AVG, another antivirus company that had been based in the Czech Republic since its founding in 1992. AVG had a similar freemium model, plus a relationship with Microsoft, and its own large user base.

In announcing the deal at the time, Steckler said the combined companies would have 400 million endpoints and a larger geographical reach, allowing Avast to feed even more data into the threat detection network it used to constantly update its products.

The backbone of Avast’s security is a cloud-based network that combines machine learning and artificial intelligence to detect threats and develop solutions. Any device running Avast software is constantly looking for malicious files, and anything suspicious is funneled into that network for analysis. If a problem is detected, updates are pushed out to protect users.

“We are in a rapidly changing industry, and this acquisition gives us the breadth and technological depth to be the security provider of choice for our current and future customers,” Steckler said in a 2016 statement. “Combining the strengths of two great tech companies, both founded in the Czech Republic and with a common culture and mission, will put us in a great position to take advantage of the new opportunities ahead.” 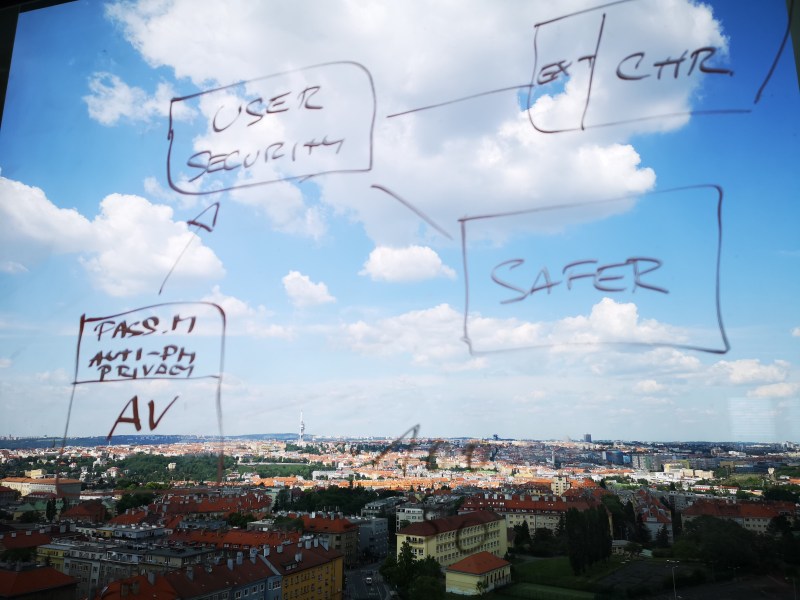 Above: The view of Prague from Avast’s HQ.

Of course, that period also included the May 10 IPO in London. Steckler said the IPO was a chance to further raise Avast’s profile, strengthen its brand, and deliver a firm reminder that the company remains healthy and independent.

“It’s a step in the company’s evolution,” he said. “This has been a labor of love for our founders for a long time. But [we have been] interested in being independent. And being listed on an exchange helps engineer trust.”

However, after all the excitement, the start was not auspicious. The stock closed down the first day and continued to tumble for several weeks, from a first-day price of £246.00 per share to £208.20 in late June.

The company’s first earnings report helped turn things around. For the first six months of 2018, revenue jumped to an adjusted $394.3 million from $359.2 million for the same period one year ago. The stock closed Thursday at £293.65.

As the company continues to ride this growth, it’s also looking to the future. It is developing a product called Avast Smart Home Security — a platform for protecting IoT devices — for launch in the coming months. Steckler said this is part of a long-term vision pushed by the blurring lines between different platforms, such as desktop, mobile gadgets, and connected objects.

“What people are going to care about is protecting their online life,” he said. “Right now, people think of protection for a single device. Those distinctions disappear when you move to a smartphone. But you can’t run endpoint protection on something like a security camera in your home. So you have to be protected at the network level.”

Meanwhile, Steckler believes Avast’s location remains one of its strongest selling points, along with being positioned in a fast-growing, technically challenging market like endpoint security. The company now has a total of 1,700 employees, including 750 in Prague and 350 in Brno, where AVG was based.

“Czechs are very well-educated and very well-respected in technical fields,” he said. “We don’t need to have people calling on retailers since we can distribute to them over the internet. There’s no go-to-market issue. This is just a fascinating location to be operating from. I think it’s a far better place to operate from than Silicon Valley or London.”