Hewlett-Packard is still trying to shake its image as uncool. Look at any Apple product and people praise its industrial design. Not so for HP.

The latest attempt to change that is the HP Mini. (No, it’s actually not a rip off of Apple’s Mac Mini). This is a tiny 2.6-pound clamshell computer that is a little too small to call a laptop. The machine, formally called the HP 2133 Mini-Note PC, has an 8.9-inch screen with a high-resolution (1280×768). It can run Windows Vista, Windows XP or Linux. The price starts at $499 for the Linux version, while the Windows versions start at $599. 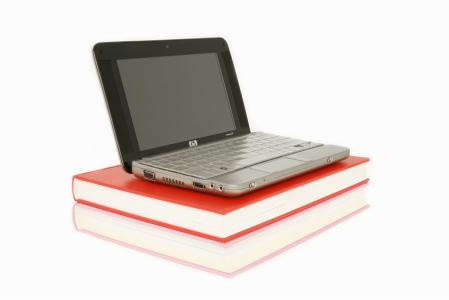 Now we don’t write about just any new PC. In fact, we almost never do. But this one says some things about the market that people should note. The design is sleek and it is just the beginning of what computer makers will be able to do as they get access to low-power processors and wireless Internet options. Since HP is targeting students, it’s also a sign of how computer makers will more narrowly target segments of the population to keep computer sales going.

The machine may seem like an ultra-mobile PC of the sort that Intel has been touting. But this one comes with a C7 processor from Via Technologies. That shows that HP is still willing to buck Intel’s processors when it suits its needs. HP hasn’t yet announced a portable computer with Intel’s low-power Atom processor, which competes with the Via chip. It is interesting that HP has chosen to pour its design resources into challenging Apple’s MacBook Air rather than join the parade of Intel clones in the emerging category of “mobile Internet devices,” which are small but have Atom chips which deliver full PC functions as well as wireless broadband Internet.

The Linux version has a flash drive option with four gigabytes of memory. All versions have the option of a 120 gigabyte or 160 gigabyte hard disk drive. There are also options for different speed hard drives.

The computer also comes an integrated optional webcam, optional Bluetooth, and other features. It is made with a rugged design and the case is anodized aluminum. The screen has an acrylic coating so that it’s hard to scrape and it uses HP’s spill-proof keyboards. It has 802.11a/b/g wireless networking.

This is a sign of things to come, much like Apple’s MacBook Air. If HP is designing something like this, then it means that the ideas it is built upon are now considered mainstream and not just for the leading-edge Apple crowd.

There’s another thing that is interesting. The machine has no built-in CD-ROM/DVD drive. If users want that, they have to pay extra for an accessory drive that plugs into a USB port. It could be the beginning of the end for physical storage media. Take note, Blu-ray vendors.