HTC today introduced a 24-karat gold limited edition of the HTC One M9. There’s just a slight problem: One of the three photos depicting the new smartphone was taken with an iPhone.

I normally couldn’t care less about premium versions of smartphones or tablets, but this is just too good to pass up. The gold smartphone was apparently launched to celebrate the end of the UEFA Champions League season, which is why its back features information about the final Champions League match between FC Barcelona and Juventus (taking place on June 6).

But that’s not what our eyes are focused on:

Damn that golden material. Why does it have to be so shiny?

You see, HTC is trying to keep up with the times by announcing the new device on Twitter. Unfortunately for HTC, Twitter is on the Internet, and the Internet never forgets.

HTC’s One smartphones all feature the camera lens in the center of the device. The camera on an iPhone is located on the top left-hand side, but of course this is a photo of a reflection, which is why it appears in the top-right.

If you look closely, you can even make out the Apple logo. It’s of course possible that the device being used is a knock-off or simply another phone that looks like an iPhone, but it’s definitely not an HTC smartphone.

Just in case HTC decides to pull the image from Twitter, here is the original: 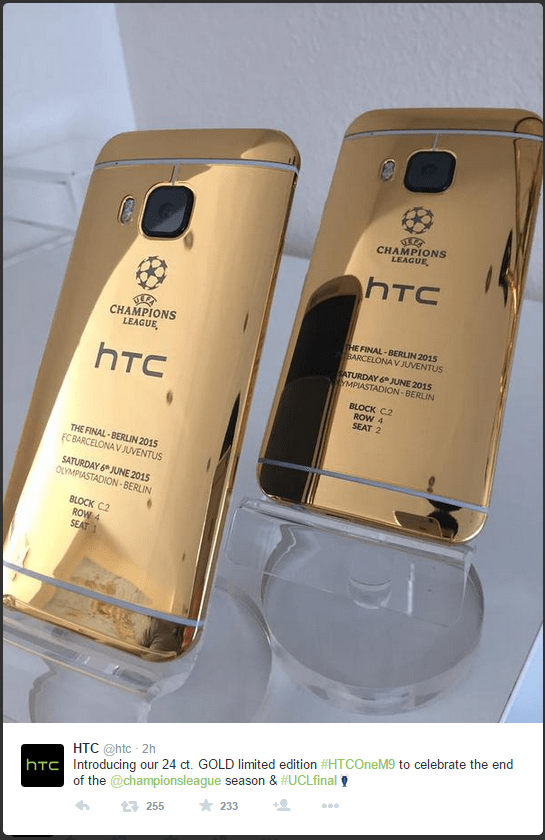 HTC hasn’t yet said how you can get one of these gold HTC One M9 phones, nor how many it plans to manufacture and sell. Even before we know those details, though, we can say with certainty this will be HTC’s most viral limited edition phone — just not for the right reasons.

Update: HTC has deleted the tweet. They company posted a new one without the offending third image.