Organizations around the world continue to adapt to unpredictable changes in consumer behavior. According to IBM’s Institute of Business Value 2021 study, when asked what they’ll pursue over the next two to three years, 56% of CEOs see massive value in enhancing operational agility and flexibility. A hybrid cloud computing model can offer this flexibility — at least compared with a public-cloud-only approach. But not all hybrid cloud models are created equally.

IBM claims that the Power E1080 offers a superior hybrid model, with exclusive, by-the-minute metering of Red Hat software including OpenShift and Red Hat Enterprise Linux. When configured with a virtual server platform in a hybrid cloud format, the server, which is designed to be installed on-premises, can scale up and down with unused CPU capacity as needed.

Stefanie Chiras, SVP of Red Hat’s platforms business, says there’s a real and present demand for these types of hybrid setups. LogicMonitor predicted that 22% of enterprise workloads will rely on hybrid cloud adoption by 2020. And according to Flexera, hybrid cloud strategy grew from 51% to 58% between 2018 and 2019, with 45% of enterprises prioritizing some sort of hybrid solution in 2019.

Beyond this, the Power E1080 has “bring-your-own-model” capabilities for AI- and machine learning-focused workloads. Using the Open Neural Network Exchange, or ONNX, trained AI models using frameworks like TensorFlow, PyTorch, and more can be deployed on the Power E1080 from x86-based servers without code changes.

The Power E1080 also delivers performance improvements compared with its predecessor, the Power E980, with four times the number of matrix math accelerators and encryption engines per core. According to IBM, the E1080 is up to 50% more performant overall and achieves 10 times faster machine learning inference performance, as well as 2.5 times faster AES encryption versus the Power E980.

The Power E1080 is built around the Power10, a processor designed by IBM and manufactured by Samsung using 7-nanometer EUV process technology. It’s IBM’s first commercially available 7-nanometer processor, and the company says it can deliver up to 30% more performance per core and over 50% better total capacity at the socket and system level.

On the security side, the Power10 supports transparent memory encryption protocols, which aim to simplify end-to-end security without impacting performance. Moreover, it powers IBM’s PowerVM hypervisor technology, a technology that IBM claims has fewer vulnerabilities and exploits than rival hypervisors. 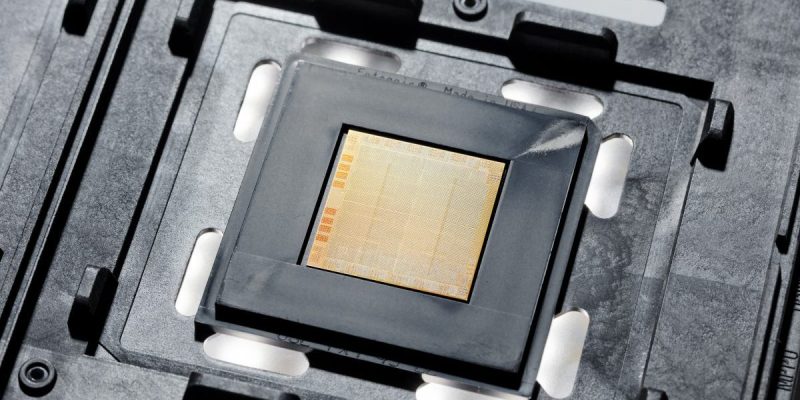 Above: A picture of IBM’s Power10 processor, which powers the new Power E1080 server.

The Power10 also features dynamic execution register control, meaning that users can design apps more resistant to attacks with negligible performance loss. In addition, it ships with what IBM calls “memory inception,” which lets any Power10-based system in a cluster to share memory with other systems.

Like previous Power processors, the Power10 is open for licensing and modification by the OpenPower Foundation’s over 250 members including Google, Nvidia, Mellanox, and Tyan.

“When we were designing the E1080, we had to be cognizant of how the pandemic was changing not only consumer behavior, but also our customer’s behavior and needs from their IT infrastructure,” IBM VP of product management for AI and hybrid cloud Dylan Boday said in a press release. “The E1080 is first system designed from the silicon up for hybrid cloud environments, a system tailor-built to serve as the foundation for our vision of a dynamic and secure frictionless hybrid cloud experience.”

IBM is taking orders for the Power E1080 starting today, with shipments expected to begin before the end of September. Alongside the E1080, the company is introducing a new service program called Power Expert Care, which offers a tiered approach with add-ons like hardware and software system health checks and regular security updates.