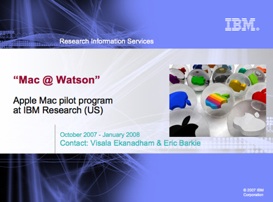 When both Microsoft and Apple were just young up-and-comers in the industry, one company stood above all others: IBM. The behemoth, which had dominated the tech landscape since the 1930s, was eventually overshadowed by the two in the operating system and then Internet age, and exited the PC business in 2005. Now they are just another big tech company reliant on Microsoft Windows — but that could soon change.

IBM’s Research division has launched a pilot program aimed at moving its workers away from Windows, according to an internal document RoughlyDrafted has obtained. The big benefactor here? Apple, a company which has been doing very well with the personal computer crowd but hasn’t yet been able to significantly penetrate large corporate environments.

Interestingly enough, IBM’s program goes so far as to give employees Apple MacBook Pro laptops instead of their traditional ThinkPads — a brand IBM developed but sold to Levono in 2005. Its stated reasons for doing so:

The limited first phase of the program ran from Ocotober 2007 until January 2008. When asked about the experience, 18 of the 22 participants who responded said the Mac offered a better experience than their PC. One rated it the same, and only three thought it was worse. These test subjects included research scientists, software engineers and a couple higher-level employees. Seven of them had little or no Mac experience prior to the test.

Not surprisingly, all of those who responded positively to the Mac experience, asked to keep the MacBook Pro rather than return to a ThinkPad.

IBM plans to expand this program in 2008 and the company has even launched an internal Mac@IBM website. Linux is another Non-Windows OS it is interested in promoting, but was not a part of this study.

If one of the largest corporations in the world is experimenting with using Apple computers, and its employees are preferring it at an 86 percent rate, perhaps it’s not too early for Microsoft to start worrying about their enterprise dominance.

This experiment has all the makings of another “I’m a PC/I’m a Mac” commercials in the future.

update: As commenter epc points out below, one of the IBM employees that participated in the program has a blog post with his thoughts. Interesting stuff.