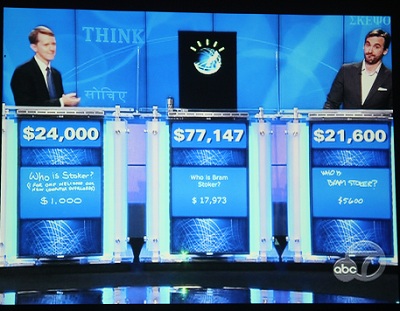 The machines are taking over! IBM’s Watson supercomputer soundly defeated its human opponents in the final round of man vs. machine on the Jeopardy TV show.

The computer defeated Jeopardy champions Ken Jennings and Brad Rutter, after a three-night tournament that drew lots of chatter about the progress of artificial intelligence. It’s a testament to the talented human engineers at IBM who figured out how to make a machine that could beat a human at the popular TV game show.

The final show aired tonight, first on the East Coast where IBM threw a party in New York at a place called spin NYC. On the West Coast, I watched the show at a comedy club in San Francisco where a group of IBMers and press are gathered. They cheered when Watson came back with the correct answer on the final question.

John Prager, an IBM researcher, explained how Watson decides what to bet and how to answer. It basically tries to come up with a precise answer, by matching the text in a question to the text in its memory. If there is no match, it takes a guess based on a confidence level, after doing a series of calculations on the probabilities of a right answer. It does so in real time.

At the opening of the show, Alex Trebek talked about how fast Watson was and its tendency to make random bets on the Daily Double and Final Jeopardy wagers. Watson took off on an early lead, but Jennings and Rutter made a comeback. During the competition, Watson correctly answered questions about Sin City (“What is Las Vegas?”) and Bison City (“What is Buffalo?”) and even a question about a Simpsons episode.

Watson won by making a $17,000-plus Final Jeopardy bet on the answer “William Wilkinson’s ‘An account of the principalities of Wallachia and Modavia’ inspired this author’s most famous novel.” Watson answered, “Who is Bram Stoker?” Watson ended the three-day run with $77,147, while Jennings had $24,000 and Rutter had $21,600.

Watson, named after IBM founder Thomas J. Watson, was developed by 25 researchers over four years. The software runs on a supercomputer with 2,880 IBM Power750 cores, or computing brains, and 15 terabytes of memory. One of Watson’s advantages is that it can hit the buzzer to answer a question faster than any human possibly can — six to 10 milliseconds. Watson won $1 million and all of its winnings will be donated to charity.

IBM describes Watson as “an analytical computing system that specializes in natural human language and provides specific answers to complex questions at rapid speeds.” That Watson can tackle a game as complex as Jeopardy shows just how much IBM has progressed since it developed Deep Blue, the supercomputer that defeated chess grandmaster Garry Kasparov in 1997, as VentureBeat’s Devindra Hardawar remarked after last night’s show. Deep Blue relied heavily on mathematical calculations, while Watson has to interpret human language, a far more difficult task.

According to Stephen Baker, author of Final Jeopardy, a book about the Watson Jeopardy challenge, the supercomputer has difficulty with the Final Jeopardy portion of the game because it can’t refuse to answer if it has a bad guess. With a normal question, Watson can just choose not to answer and look smarter in the process.

Watson cannot respond to video or audio clues and the producers of the show agreed to omit them, just as they do for the visually or hearing impaired. Jeopardy is considered an ideal show for testing artificial intelligence because it covers such a broad range of topics and requires a mastery of natural language.

Baker spoke to All Things Digital about Watson’s mistake on Tuesday night, where he elaborated on how it can appear both smart and stupid at the same time. IBM has also put up a blog post that delves into Watson’s Final Jeopardy trouble.

Video of the match isn’t available online yet, but you can check out a preview match between Watson, Jennings and Rutter (where the humans were also destroyed).

At the end of the San Francisco event, I asked Prager, “How do you get from Watson to Skynet?” That’s a reference to the computer network in the Terminator movies that comes alive and tries to extinguish the human race. Prager said, “I don’t see a path to get to Skynet and I don’t know anyone who is working on that. I don’t see a path to HAL either.” HAL is the computer that goes berserk in 2001: A Space Odyssey. And, of course, HAL’s initials are one letter off from the next letters of the alphabet: IBM.