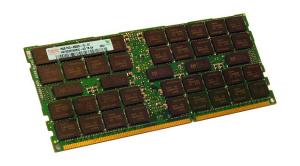 Silicon Valley start-up MetaRAM is announcing its second-generation chip set today with backing from Intel. MetaRAM’s technology can quadruple the memory capacity in a server, cutting the server costs as much as 90 percent. The Intel endorsement is a big win for a little San Jose company that has proven more clever than giant memory chip makers.

It’s no surprise that Intel will give MetaRAM some of the limelight at its “digital enterprise” keynote speech today at the Intel Developer Forum in San Francisco. MetaRAM is one of the most interesting chip startups, with marquee backers such as Intel itself and tech luminaries Bill Joy and Vinod Khosla.

It was founded in January 2006 by Suresh Rajan, who had a simple but elegant idea. He figured out a way to trick a server’s memory controller. Normally, a server can access a limited amount of memory chips on a single memory module. MetaRAM creates a chip set for the memory module that lets the memory controller count multiple chips as just a single one. In doing so, it lets the controller overcome the memory limitations and access as much as four times more memory on a module.

This trick comes at a critical juncture for computer servers, whose processors are far outracing the performance of memory chips. It removes a bottleneck. That, in turn, can cut the cost of a server by as much as 90 percent.

MetaRAM is now launching a second generation chip set which supports DDR3 memory. As a result, Intel is endorsing MetaRAM as a solution to go with Intel’s upcoming new microprocessors, code-named Nehalem. Earlier this year, MetaRAM announced its first-generation chips based on DDR2 memory. That solution proved popular in servers from companies such as RackSpace. But it was used in a much smaller slice of the market for servers that use processors from Advanced Micro Devices. The new DDR3 chip set will be available in the fourth quarter. Memory chip maker Hynix is showing memory modules today with working MetaRAM DDR3 chip sets, including the world’s biggest 16-gigabyte memory module for Intel servers.

“Now the entire server market is open to us,” said Rajan, who shifted to vice president of marketing after he recruited a CEO, in an interview.

These kinds of servers will be able to run more efficiently, saving electricity costs in big data centers and allowing servers to handle complex files such as medical images without choking on the huge amount of data. The company has a team of 40 employees. The CEO is Fred Weber, the former chief technology officer at AMD who helped conceive the Opteron processor, which debuted in 2003 and saved AMD.