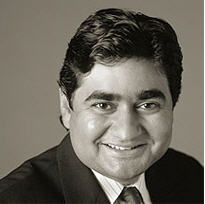 Accel is about to announce it has snagged Sameer Gandhi to join the firm as a general partner in Palo Alto, VentureBeat has learned.

This is a tit for tat, because the Accel move steals a page out Sequoia’s play book. In 2004, Sequoia had poached Jim Goetz from Accel, in an aggressive move soon followed by other firms. Benchmark lured away Peter Fenton from Accel two years ago. Earlier this year, Kleiner recruited Chi-Hua Chien from Accel, though that may have been less of a blow because Chien was a non-investing associate at Accel at the time.

Accel, which may have felt a little wounded from some of this, appears to have stayed focused. It has had 14 companies sold or gone public in two years, and added other partners, including Richard Wong, Andrew Braccia, venture partner In Sik Rhee, and executive in residence Dick Williams.

Still, it was time for Accel to strike back.

Sameer Gandhi was an investor in a company called Gracenote, a provider of meta data for the music market, which was acquired two weeks ago by Sony for $260 million.

Notably, we mentioned Gandhi recently in a piece about TheFunded’s new rating system for VCs. There, Gandhi received poor marks relative to other partners at Sequoia, although his rank has since moved up to 2.4 out of 5, from 1.8 out of 5. However, I’ve found that TheFunded can be very misleading at times, so I wouldn’t put much stock in the rating without learning more. First, there were very few reviews that make up the rating, and so it could be driven by a clique with an ax to grind. Second, along the same lines, TheFunded by default is a place that often draws frustrated entrepreneurs who have been rejected by venture capitalists, and so you’re never quite sure what agendas are present. Third, the criticisms I saw on the site about him didn’t get into any specifics, with one entrepreneur vaguely saying Gandhi should be avoided. I don’t know much about Gandhi, and have never met him. So in the meantime, I’ll be doing a little more research into Gandhi’s track-record.

In his new role with the Accel team, Sameer will help develop leading companies in the consumer Internet and the software sectors…

“The Accel team has built a very strong position,” said Sameer Gandhi. “I am looking forward to working with everyone in the group and being part of the Accel team that helps to build the firm over the coming decades.”

Prior to Accel, Sameer joined Sequoia in 1998 and has been a partner leading several of their investments including Barracuda Networks, eHarmony, Gracenote (acquired by Sony), Marketlive and Sourcefire (FIRE) among others over his decade at the firm. Prior to Sequoia, Sameer was a technology banker at Broadview and a sales engineer at Oracle. Sameer has an MBA from Stanford University and a BSEE and MSEE from the Massachusetts Institute of Technology

Update II: Turns out, Sequoia and Accel have co-invested in more than 20 companies together.