The tragicomedy known as the Fyre Festival, an exclusive Burning Man-type gathering for the uber rich on an island in the Bahamas, has now become a national punchline.

Instead of enjoying a luxury-soaked few days in an exclusive setting, festival goers found themselves trapped with little infrastructure, almost all entertainment canceled, and in many cases no way off the island.

So, naturally, somebody is suing. A plaintiff named Daniel Jung filed a lawsuit after having bought a $2,000 ticket. The lawsuit in federal district court doesn’t give much information on Jung, except for including this picture of him on the left: 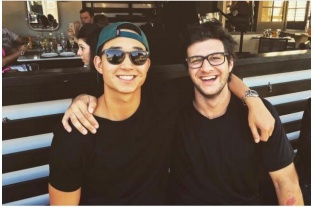 He apparently thought he was getting this:

Or, as the lawsuit says: “Defendants promoted their ‘Fyre Festival’ as a posh, island-based music festival featuring ‘first-class culinary experiences and a luxury atmosphere.'”

But: “Instead, festival-goers were lured into what various media outlets have since labeled a ‘complete disaster’, ‘mass chaos’, and a ‘post-apocalyptic nightmare.'” And: “The festival’s lack of adequate food, water, shelter, and medical care created a dangerous and panicked situation among attendees — suddenly finding themselves stranded on a remote island without basic provisions — that was closer to The Hunger Games or Lord of the Flies than Coachella.”

Further: “Festival-goers survived on bare rations, little more than bread and a slice of cheese, and tried to escape the elements in the only shelter provided by Defendants: small clusters of FEMA tents, exposed on a sand bar, that were soaked and battered by wind and rain.”

The attendees were trapped in part because the event was supposed to be “cashless,” and so they had to “upload funds to a wristband for use at the festival rather than bringing any cash. As such, Attendees were unable to purchase basic transportation on local taxis or busses, which accept only cash. As a result of Defendants’ roadblocks to escape, at least one attendee suffered a medical emergency and lost consciousness after being locked inside a nearby building with other concert-goers waiting to be airlifted from the island.”

Fortunately, in the face of hellish conditions, the uber rich still managed to post their experience on Instagram and Twitter. And so the chief eyewitness in this case will be social media.

Jung’s lawsuit draws on those real-time posts to bolster his claim. Of course, the number of postings about the disaster on Twitter is limitless at this point. The lawsuit includes several posts from the account of William N. Finley IV‏, who chronicled hilariously and scarily his ordeal while on the island, trying to find food and shelter, and then trying to get home:

These are the secure lockers at Fyre Fest. They forgot to tell us we needed locks. #fyrefestival #fyrefest pic.twitter.com/Tqyjqbg2Gy

And so on. The only odd thing (I mean, it’s all odd, but…), is that the lawyers didn’t seem to include ones that were far worse. But we guess there will be time to introduce those later.

Organizers, a loose term in this case, have apparently offered apologies and refunds:

Fyre Festival is now offering refunds AND a call from Billy the co-founder. Guess this trip wasn't so bad after all. #fyrefestival pic.twitter.com/bdRW3m9JZr

But the lawsuit includes numerous indicators that the festival organizers were aware that all was not well weeks earlier, and still did not inform ticketholders in advance.

Still, as one snarky tweet noted, the good news for everyone is that there is still nothing quite as funny as watching rich idiots suffer:

In a way, Fyre Festival was an amazing success. Instead of entertaining thousands of people, it entertained millions.